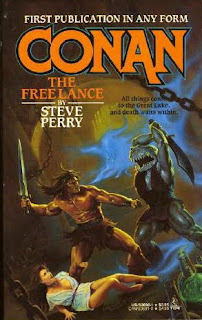 Suddenly I have the overwhelming urge to write a new crossover: Conan vs the Street Sharks...

I haven't read any of Steve Perry's pastiches.  Nearly everyone I've talked to has told me to avoid, avoid, avoid - even those who like the pastiches. They appear to be for Conan completists only.  Still, this was a long time ago, so I assumed that Perry's dalliance with Conan was a relic of the past.  Until I came across this.

I'm unsure if this is the same Steve Perry who brought us such masterpieces as Conan the Fearless, Conan the Defiant, Conan the Indomitable, Conan the Freelance and Conan the Formidable, but if it is, then it's truly illuminating.

In Thong the Barbarian Meets the Cycle Sluts of Saturn, Reaves and I used as many said-bookisms and adverbs as we could shoehorn into our prose: We were making fun of three different pulp writers: Robert E. Howard, E.E. "Doc" Smith, and H.P. Lovecraft, all of whom leaned hard into that overblown style of writing. (Out-of-print, and last time I looked, Thong is a collector's item, going for about $250 for the basic hardback, Lord know how much one of the leatherbounds might go for these days.) Observe these sentences, from Thong:

"'He insults us!' One-Eyed Dick ejaculated as he reached for his sword."

"'He does?' Bwuce asked questioningly."

"'The goddess Peristali did not grant me relief," he said constipatedly ..."

They stink - but they are supposed to stink.

All three of the writers we were lampooning had a tendency to florid writing, Howard and Lovecraft more than Smith, and part of the point of the story was to sail the purple seas and try to harpoon as many gags as we could.

Hmm.  How to take this? On the one hand, Howard's stories - even the non-public domain ones - are still in print, while Thong the Barbarian Meets the Cycle Sluts of Saturn - not to mention Perry's own Conan pastiches - languish out of print.  Methinks maybe there's a very good reason for that.  Perry's Conan pastiches are frequently considered to be among the very worst, in the same company as the Harry Turtledoves and Leonard Carpenters, and I've made a point of avoiding them as a result.

Perry specifically says he's making fun of Howard, Doc Smith and Lovecraft.  Not an "affectionate homage," nor a "loving parody" - making fun.  Well, I'm not going to make any judgment on Perry's skills as an author, but seeing as Howard and Lovecraft are collected in the Library of America and Penguin classics, not to mention perennial considered among the best and most influential weird writers even three-quarters of a century after their deaths, while his pastiches are almost universally despised, it's kind of hilarious that the implication is that it is their prose which "stinks." 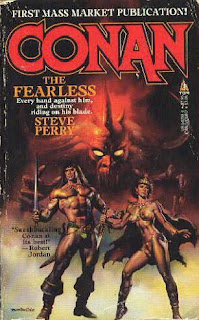 One wonders if this is exactly what Perry was thinking during his time at Tor.  If he didn't think much of Howard's writing, then how could he possibly do a good pastiche? Heck, was he writing the pastiches with the intent of parodying Howard?  Was he intentionally "breaking the rules" of writing in his godawful Conan pastiches because that's what he perceived Howard to be doing? Was Perry, essentially, "slumming it?"

It sure would explain a lot.

I had a look through his blog and, sure enough, there's more.

Back when I was willing to take on all kinds of writing work because they were offering and I didn't want to let anything pass, I took on a couple of Conan novels. I enjoyed doing them, but after the second, I was done.

Or so I thought.

Then my wife's company was the victim of a hostile takeover by a corporate raider, who broke the company apart and sold off the assets, during which she was let go. She decided to try consulting for a time, and actually did okay at it, but money was tight going in, and when the Conan folks offered more work, I grabbed it, signing up for three more books.

So Perry was done with Conan after two.  He did another three.  After he was done.  Go figure.

Halfway through the fourth of five, I think, I was having a bit of trouble with the thee-thou-thither and punctilious use of "shall" and "will," of the prose, and in a fit of semi-hysteria, I penned a short story, "Conan Takes a Hike," which poked fun at Howard's creation. 'Twas a story that, for legal reasons, could never see print, but which I read aloud at conventions now and then. Basically, Conan tossed his sword aside, disgusted with all the slaying and gore. He wanted to go off to the country and get into bee-keeping with Sherlock Holmes, maybe finish up his Ph.D at Oxford, but alas, it was not to be ...

There's that "poke fun" again.  Maybe I'm being overly sensitive and arguing semantics, but I'm getting serious "Gilgamesh in the Outback" allusions. Also, "thee-thou-thither"?  "Thee" comes up four times in the Howard Conan stories, "thou" six, and "thither" only comes up three times.  If you're using archaic terms like that so often that you're driven to distraction, then... dude, you're doin' it wrong.

Robert E. Howard, Conan's daddy, was raised, and lived in, small towns in Texas. A mama's boy whose mother had TB and was dying from it most of his life, Howard was thirty when his mother went into a coma from which she was not expected to recover. Depressed, he went out to his car, pulled a borrowed. .380 Colt pistol from the glove box, and shot himself in the head.

Normally I'd rant on about his use of "Mama's boy," and the idea that Howard only got the idea to kill himself when his mother slipped into a coma, but given the scant regard Perry seems to show Conan, how can I possibly expect him to be any more respectful - or accurate - of Howard?

A product of his time and that place, Howard was sexist, racist, and anti-semitic. You can see this in his writing -- there are references to hook-noses and darkies here and there, "swamp niggers," and the like, including in some of the Conan stories.

"Darkies" and "swamp niggers."  Terms used by characters, usually in stories set in a time period where that was the terminology used.  "Swamp niggers" was a term used in "Black Canaan" to describe what is clearly a supernatural menace born of the swamps - by white Texans of the early 20th Century.
Oh, by the way, there is not a single reference to "darkies" or "swamp niggers" in any of the Conan stories.  Not one.  Why?  Because those are unambiguously modern terminologies.  Why would Howard have such obviously then-modern slang in stories set during An Age Undreamed Of? The Shemites are described as having "hook noses" because... that kind of describes their noses.  It's no more inherently racist than "Roman nose,"  a synonym for "hook-nose." 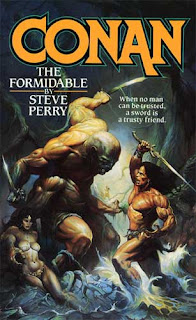 Except when it, you know, breaks.
As for sexist - yeah.  No.  (The amount of times I've had to link to that article, I should bookmark it for easy access...)

There are exceptions, and he seemed to be becoming less bigoted as he aged, but there are plenty of examples of his views, which were considered normal for the times. Ah, the bad old days ...

Such a shame that Perry gives examples of "hook-noses," "darkies" and "swamp niggers," but doesn't seem to bother listing any of those myriad exceptions. Because frankly, I think listing exceptions to the norm would be more worthy of consideration than listing the stuff that marked him as a product of his time.  It almost comes across as an afterthought, even though those exceptions are pretty damned important - some are the stars of their stories, ferchrissakes!

I used to use the term "thew-boy" when I talked about Conan. Fun to see who got the joke and who didn't ...

Let me guess, it's a reference to "mighty thews" - a phrase Howard used only twice (one of those occasions as "mightily-thewed") and to describe not Conan, but one of the villains.  Or is it just "thews" in general - a word that appears a scant 40 times in all the stories, drafts, fragments and synopses?  37 out of some 450,000 words?
Oh, I get the joke, alright.  In all my dealings with Steve Perry's "Conan" pastiches, I'm just going to refer to them as Thew-Boy - because they sure aren't Conan.
To his credit, Perry does come to Howard's defense about the racist elements in the comments:

I think this can be summed up in three words and a date:

I expect that most folks in that region in the 1920's knew little about Harlem and the artistic Renaissance there, and any time you ventured below the Mason-Dixon line in them days, Jim Crow was the norm.

(The laws were based on a song, which predated the Civil War. I can remember singing this vile little ditty when I was a child, but all I can remember of it is the chorus:

We learned it in school.

Any white men from that region and time who were writing and weren't racist, sexist, and good ole boys would have exceptions to the rule.

Howard was born a little over forty years after the Confederacy fell. Given that there are places where the South is still fighting and losing that war, that he was brought up a bigot isn't a surprise.

It is hard to transcend that kind of thing when that's all you hear and see everywhere you look.

... Erm, well, the important thing is you tried, Mr Perry.

I'm sure some would criticize my views as being overly sensitive, the thin-skinned protestations of the reactionary fanboy.  I've been accused of it before, and I'd happily concede to it: I'd rather be accused of over-enthusiasm than lazy indifference.  Maybe it is, maybe it isn't, but frankly, I see little in Perry's posts that suggests anything more substantial than lip service, or at least, an appreciation of Howard from a tongue-in-cheek, "it's all silly fun" perspective.  Who knows, maybe it's acerbic self-deprecation: in another post, he calls Cycle Sluts of Saturn "insulting the memories" of Howard, Doc Smith and Lovecraft.  He does at least seem to appreciate Lovecraft, since he named one of his dogs after the man.  At least, I dearly hope it's tongue in cheek.

Still, there's one pearl of wisdom here: the title of his blog is "Old Enough To Know Better."  Got that right.
Uttered by Taranaich at 08:54