Conan the Barbarian: A work of comic genius.

It's all so clear to me now. Conan the Barbarian is a comedy.

Sure, it has measures of profundity and some very serious and tragic elements, but upon my most recent viewing I've come to the conclusion that there is a lot of humour in Conan the Barbarian - and I believe most of it to be intentional.  Sure, you have the alleged "camp" elements and occasional special effects mishaps, but I never really noticed just how much comic material there is in the film.

Rewatching Conan the Barbarian again, I couldn't help but notice little things.  Sometimes it's a reference, sometimes it's a simple gag, and other times it's an attempt to make the world more "real."  I love Cobb's production design (even if it is more early/post Hyborian than the age of Conan, in my opinion) and there are so many elements that leap out at me. Some of these things are utterly hilarious.

Like this guy.  That chap on the far left lurking in the shadows.  I call him Mahmud.

Mahmud is one of King Osric's men sent to summon the Gang of Three to the king's palace. I'm of the opinion that they are meant to be Asshuri: they have the beards, vaguely Mesopotamian armour, and wield bows.  Hence the Arabic name, Mahmud.  At least, that's how I'd classify them: for all we know Milius intended them to be Gilded Knights of Ophir or Bossonian Archers.

Mahmoud knows that he has to watch these two: there's no telling what they might try. While the other guards have their faceguards still raised, Mahmud is more careful, having lowered his faceguard before he even walked through the door. Mahmud has seen too many tavern brawls to consider any measure as "too cautious."  As Spangle sees the guards coming, she attempts to rouse Konahn.

... and Mahmoud promptly shifts his focus to Konahn.  A man who's clearly drunk out of his skull.  Or perhaps, Mahmud thinks, that's what he wants us to believe.  Not willing to be fooled by a man playing drunk, Mahmud watches Konahn intently...

... even when Spangle draws her blade.  Only then do his more lenient colleagues decide to drop faceplates, and raise their bows. Mahmud is a man who has his eye on the ball: he knows the others are watching his back with Spangle, but only he is watching Konahn.

Mahmud is now one of my very favourite characters in the film. I can only think the actor who played him simply threw himself into the role: "It may be a bit part, but I'll be the best darn extra there's ever been!"  And so we have his inexplicably hilarious scene.

Then there's the Soup Man.

Look at him!  His underbite is so pronounced his bottom lip protrudes further than his helmet!  And yet, I believe he takes great pride in being the Soup Man at the Mountain of Power (seriously, saying all that aloud just shows how ludicrous the film can be at times): he stirs his cannibal pot thoroughly and carefully, ladling out the green broth with relish, always careful to make sure everyone gets a body part in their bowl.  I almost felt bad for the guy when Subotai inconsiderately slashed his jugular open.

Arnold himself is an incredibly funny guy. It's half the appeal of the man: he has this infectious charm and charisma in all of his roles.  Even The Terminator.  There are many moments where he gurns or makes some action that has me in stitches:

Konahn experiences his first lizard-onna-stick.  He flicks the lizard's tail, which fascinates him mightily.  It's a delightful little moment, and I think this was the first time he's ever seen a reptile.

Initially I didn't realize he was doing the "Too Snehkks Fehssing Eech Uddah" gesture as seen in the Witch's house, so for the longest time I thought he was flexing his biceps... just because he wanted to give an impromptu gun show.  And that amused me greatly.

Aww, the little guy's all tuckered out.  He tried to stay awake, but he's just too tired: he's sleeping like a little angel. He even made a tiny tent for himself - isn't that precious?

Even beyond these little bits, there is some great highlighted comedy in the film.  Konahn and Subotai's little theological discussion had a gentle warmth about it.  King Osric's "Lions ate him?  'Lions ate him(!)'" line is just perfectly delivered.  Mako is brilliant.  The general's first line, "my fear is that my sons will never understand me," is so unexpectedly candid and understated I can't help but laugh, followed by his resounding "WRONG!" to the bizarrely melodramatic warrior. Even Sandahl Bergman does a decent job with her occassional gallows humor.  I might even do a Top Ten or even Twenty Funniest Moments in Conan the Barbarian list. Weirdly enough, I never really laughed at the camel-punching joke.  I don't know why.  Maybe I didn't really like how it was shot, or I was too offended at the pointless animal cruelty.  Maybe it's because I had already seen Blazing Saddles by that point. 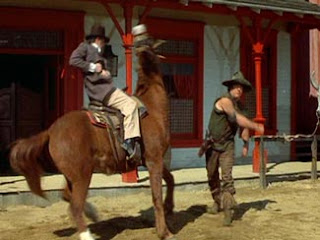 Still, I'm rather disquieted at the same time. The original Conan stories did have a fair amount of humor in them, and it was largely self-deprecating, even bordering on slapstick at times. As such, it isn't the humour of Conan the Barbarian that bothers me in itself: I just think Milius implemented an awful lot of comedy in something he seems to be treating as a very solemn, serious work, and it borders on being a bit too much at times.  I certainly can't see how people could call the film "too serious," though: there's an element of the sort of "fun" one finds in the likes of Big Trouble in Little China, Evil Dead, and the Indiana Jones movies.

I think I can finally understand why people consider Conan the Barbarian to be campy and cheesy. Now, I don't think it is, but I can see why they'd think that.  I think the point where the film really begins to become funny is about 18 minutes in, with the Pit Fighting scene: from the moment Konahn staggers in, looking dumbly back up at Red Hair, one gets a vague sense of the giggles. But when you hear Arnold's now trademark moaning - sort of like the painful version of the Weissmuller Yell - I couldn't help but stifle a snicker.  I hadn't done so the first time I watched the film, but now... I don't know.  Perhaps it's repeated viewings.  From then on, there are more than a few examples of Arnold's gurning, expressions and reactions that are just really, really funny.  Unfortunately, I think this is sometimes to the detriment to the film.

Unless, that is, you think of it as a comedy - perhaps even a parody - of Conan.  Given how it completely usurps and inverts Howard's character and world in a great many ways, yet borrows more than a few elements, I think a case could be made for that reinterpretation.