Transformers: War for Cybertron, or, The Rise of Wheelie

It just occurred to me that I'm posting a lot of stuff that really should be the domain of The Cimmerian, which isn't what I intended for The Blog That Time Forgot. Therefore, I'm going to stick to the one thing that probably wouldn't fly on TC: Transformers!

Yes, I am excited.

Obviously, it's good to see some actual gameplay, as well as some of the characters I wasn't expecting. Arcee is a pleasant surprise, but she's a G1 stalwart. The big surprise was what appeared to be Slipstream, a fan favourite of the recent Transformers Animated. While I really dislike the art design and terrible animation, the plot and characterisation make up for those deficiencies in a lot of ways. I'm very pleased to see Slipstream, being a very cool personality, and I appreciate more fembots. With characters from Armada (Demolishor) and now Animated, there's a bit of hope that some characters from other non-G1 cartoon sources could make an appearance. Maybe even the G1 comics. Come on, Impactor!

Well, even if they don't have Impactor, he could be created with that nifty Create-a-Bot mode. The question is should he be a soldier (tank) for fidelity to his alt mode, or leader (truck) to reflect his role in the comics? Apparently one can choose three bots for each mission, leading me to wonder if that means one can then make three customs: a Wreckers reunion with leader Impactor, soldier Roadbuster and scout Springer? For the Decepticons, how 'bout the Mayhem Attack Squad with soldier Bludgeon, leader Stranglehold and scientist Octopunch? Decisions, decisions.

I've pre-ordered the game for PC, but I'm deliberating over whether to go for the graphics option (360) instead. I'm hoping that High Moon makes the game easy enough to mod, as modifying a game increases its lifespan considerably. If it turns out the game can be modded, there are tons of possibilities. Obviously there'd be G1 mods to put the characters in their classic chassis - if High Moon don't put them in as extras anyway, and I think there's a pretty high possibility of that - and undoubtedly the Beast Wars fans'll do something like Dawn of Future's Past with their beloved Maximals & Predacons on Cybertron.

Me? Shattered Glass. If nothing else, you could simply swap the colours around, since Cybertron's already pretty dark. My barbarian warlord Wheelie will destroy you all. Seriously, look at the entry at the TFWiki: in the absence of a heroic Grimlock in this universe, someone has to be Robot Conan. Even in G1, Wheelie was a badass (except in the cartoon, Primus preserve us from that damn cartoon!) so it's easy to imagine him in this role. I've half a mind to do a Frazetta pastiche with SG Wheelie wielding a great slingshot, fembots clutching his leg, the cranial casings of slagged Decepticons piled at his feet.


"Know, O Prime, that between the vorns when the Light Gods and the Dark Armies battled, and the vorns of the rise of the Sons of Alpha Trion, there was an Age Undreamed Of, when shining planets lay spread across the cosmos like blue circuitboards among the stars: Nebulos, Ghennix, Cheyne, Elpasos, Tyroxia with its good-hearted peoples and arts of geometric wonder, Klo with its brutality, Thessin that warred with the icy realm of Furnacia, Lithone with its emotionless autocracy, Cybertron with its warriors of steel and silver and gold. But the proudest planet of the galaxy was Quintesson, reigning supreme in the dreaming aether. Hither rolled Wheelie the Warlord, black-sparked, sullen optics, slingshot in hand, a thief, a reaver, a slayer, with gigantic melancholies and gigantic mirth, to tread the jewelled diodes of the cosmos under his hydraulic feet..." 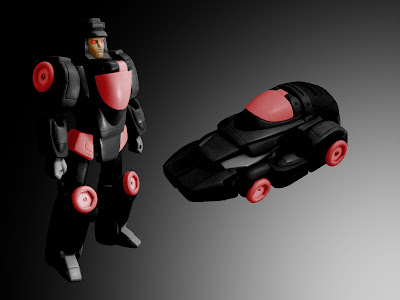 Tremble in fear, Wheelie is here!
Uttered by Taranaich at 10:00