The Conan That Could Have Been...

As reported by Devin Faraci. 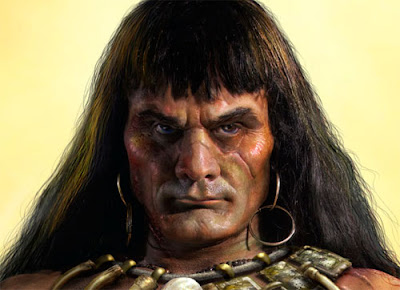 That's the face of the Conan you'll never see in a movie.

By now you've probably seen the images from the set of the new Conan movie. Jason Momoa looks like a cross between Tarzan and Kid Conan, and the general cheesiness has done little to instill hope in the minds of fans. What we've ended up with is basically the weakest version of Conan possible, but what would have been the strongest?

Devin, let's be real: Momoa is in no way the weakest version of Conan possible. Kellan Lutz would have been infinitely worse, and I seriously doubt Jared Padalecki could've bulked up as much as Momo has. In terms of appropriateness for the role, bodybuilders with no actual acting ability - like Roland Kickinger - would be terrible choices. I'd take Momoa over those guys any day.

I could do a whole series on the trials and tribulations of a new Conan movie over the past few decades; people from John Milius to the Wachowski Bros had their attempts. At a couple of points it got close to happening at Warner Bros; close enough that make-up tests were commissioned. The image you see above is one of those.

The make up was from Prosthetic Renaissance, and it was a pretty big set of appliances - forehead, nostrils, chin, bridge of the nose, wig, even cheeks. The design was, obviously, based on the late Frank Frazetta's vision for the character, and it's looks like a painting from the Frazetta archive come alive.

The movie ended up not going this way, and instead we're going to have a slight, young Conan instead of this grizzled, bad ass one. For now enjoy imagining what could have been.

I have to laugh at anyone who calls Jason Momoa "slight." I know he isn't as muscular as many would like, but come on. 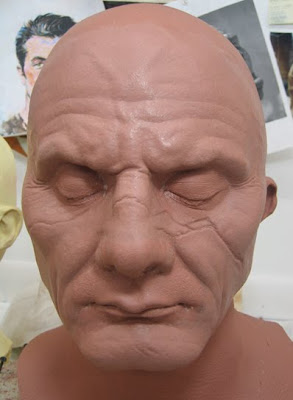 As to the image itself: it's a fantastic piece of makeup work, but ultimately, I wouldn't support this route. Why? Because of the nature of makeup. That prosthetic is trapped in one expression: the "sullen-eyed" stare of the famous Adventurer painting. It's fantastic for that single expression, but Conan had a wide range of emotions. Gigantic melancholies, gigantic mirth, stark terror, black fury, grim amusement, and more. It's not worth sacrificing Conan's characterisation just so we can get a few shots that looked like they stepped out of a Frazetta painting.

Besides, for all its sophistication, it still looks like makeup. The cheekbones are made so prominent that the eyes look too close together, making the effect more Alley-Oop than Conan. This tends to happen a lot in makeup, especially in shows like Star Trek or Buffy. Combined with the rough photoshopping and Conan having one eye that's blue and one that's brown (for no discernable reason), and the effect of seeing a three-dimensional Frazetta portrait seems more like a nice tribute, but not a good idea for live action. I get the impression that WB's Conan, if it went through, would've been like 300 or Sin City: a comic book brought to life. Thing is, Conan isn't (just) a comic, it's powerful prose and narrative beyond visual tableaus and imagery.

This news comes on the heels of Robert Rodriguez announcing his claim to the Bakshi-Frazetta collaboration Fire & Ice. I'm actually rather ambivalent to F&I, even though I love films of that genre. I guess it's because it simply couldn't measure up to Frazetta's work, rotoscope or not, and it started what I term "Frazetta pastiches." Frazetta Pastiches, as per my definition, are those films that try to ape the surface elements of Frazetta's work, without looking to the stuff that makes it great. They replicate the details, have a bunch of near-nude figures, and - if we're lucky - see the fantastic mix of colours. Sadly, like the Conan pastiches, they end up hollow and limp in comparison to the originals. Conan the Barbarian, Pathfinder, and (in my opinion) Fire & Ice were examples of this, and like Howard pastiches, their success on their own merits varies greatly: however, in terms of relation to their inspirations, they're all about as unsuccessful.

Nonetheless, I started thinking of how an updated Fire & Ice could be, particularly a Robert Zemeckis film that had really bothered me: Beowulf. Beowulf is a film that almost deliberately chose to limit itself despite the complete freedom the technology at its disposal offered. Zemeckis looked like he learned his lesson from The Polar Express with his far superior Monster House: here, he swapped the photorealistic Tom Hanks that popped up everywhere with a stylized, cartoonish approach, improving the film greatly, and reducing the Uncanny Valley. In Beowulf, he tried... but again, he failed. While the Uncanny Valley was far removed, there was still a very noticeable disconnect between the motion-captured elements, and the animated ones. The characters moved and acted naturally in some scenes, and flopped about like a ragdoll in others, especially the final battle with the dragon. It was very jarring and annoying.

But what really bothered me about Beowulf is that they did virtually nothing that couldn't have been done with real actors. They had Angelina Jolie, but instead of creating some divine vision of beauty for Grendel's mother, they practically digitally render Angelina Jolie. Almost directly translating her to computer... why? When you have Angelina Jolie, what was stopping you from just filming Angelina freakin' Jolie? Hrothgar looked like Anthongy Hopkins with a beard and wig. Unferth was just John Malkovich with the same. Wealtheow was just Robin Wright Penn, Wiglaf was just Brendan Gleeson, Ursula was just Allison Lohman. The only person who benefitted was Beowulf, and frankly, he ended up looking so much like Sean Bean that they might as well have just cast Sean fecking Bean.

All through this, I was thinking: why not just shoot the actors in costume? Defenders say that it's an "artistic choice": it clearly is, but it's an expensive and utterly pointless one. Imagine if they did this, but with Heavy Rain instead: everyone is cops wearing suits running about in a perfectly mundane setting, but costing 100 million dollars and hundreds of rendering hours as opposed to 100 thousand dollars and a few weeks shooting time. It's a grotesque, obscene use of money and time, to make something utterly mundane using tools that could be used to make something amazing.

So what could benefit from the Beowulf style of performance capture? Fire & Ice.

Imagine Frazetta's actual paintings and designs coming to life: Darkwolf, Teegra, Larn and Nekron portrayed by capable actors, and rendered with bodies straight out of Frazetta's sketchebook and covers, using the technology from Beowulf and Avatar. What's more, the very medium of paint could be used, to make it look like it was animated with paint. The credits sequence in Robin Hood comes to mind, but more refined, to resemble Frazetta's brushstrokes. Frazetta: The Movie.

Tell me that wouldn't be worth seeing.
Uttered by Taranaich at 11:45