What is this I don't even 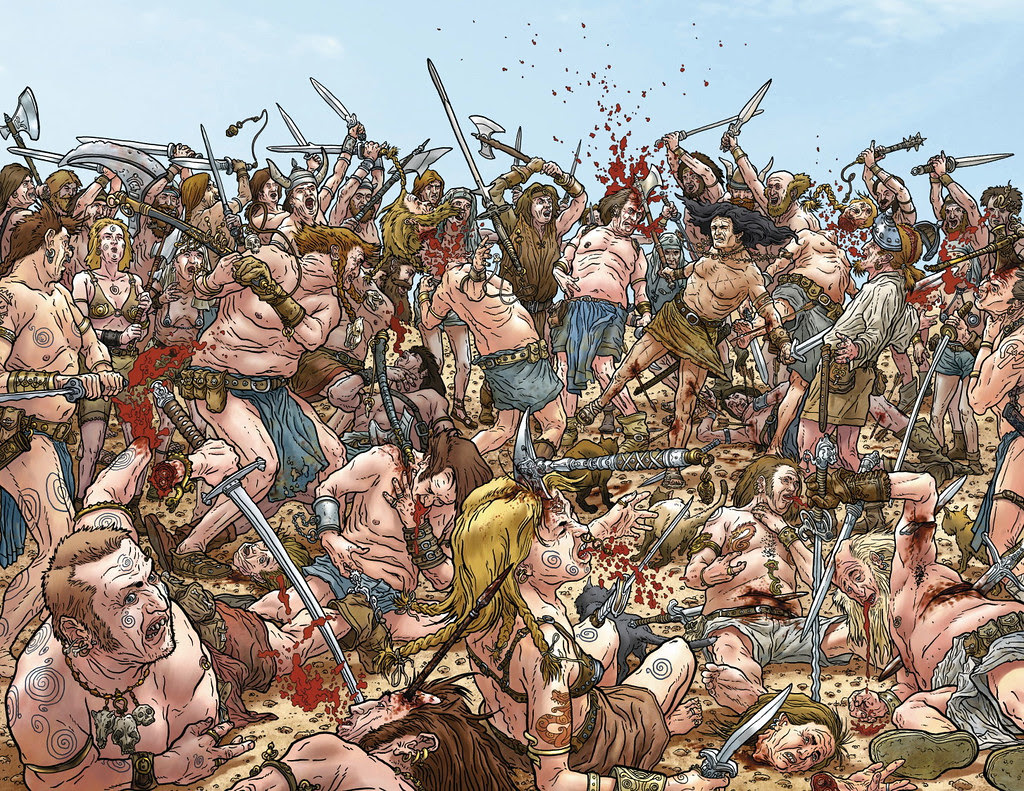 I'm at a loss, really. Who thought this was a good idea for the final Conan the Cimmerian cover? It looks like a Mad Magazine parody for Conan the Octogenarian: just add scythed wheelchairs, bladed zimmer frames and spiked colostomy bags, and you're good to go. Hell, it even has cats.


Geof called me from Japan last year to chat about Dark Horse's “Blade of the Immortal” manga series and to share his admiration for its creator, Hiroaki Samura. Talking about my Robert E. Howard projects got Geof interested in doing something with Conan -- which led to this cover! I was asked to find someone who could deliver a violent and over-the-top cover for this series finale -- and I think Geof was the perfect fit. At some point in our phone conversations, Geof gleaned that I was a "cat person," so he added several mortified-but-innocent cats into this bloody fray. Find them if you can! There are also many cool "Easter eggs" in this wraparound piece from Geof, who is known for packing an incredible amount of fun detail into his work and who really put a lot into this “Conan the Cimmerian” #25 cover. This piece was colored by Peter Doherty, Geof's frequent creative partner and colorist on “Shaolin Cowboy.”
“Conan the Cimmerian” #25 will actually be a full-tilt celebration of Conan the character, rather than a funeral dirge for “Conan the Cimmerian,” the comic-book series that's ending. In addition to Geof's stunning wraparound cover, we're going to have at least a dozen pinups from professional artists, and we'll have limited ad pages. Conan fans such as Jeffrey Brown (“Clumsy, Little Things”), Rob Guillory (“Chew”), Art Baltazar (“Tiny Titans”), Dean Haspiel (“Billy Dogma”), Farel Dalrymple (“Pop Gun War”, “Omega”), and Dan Hipp (“Amazing Joy Buzzards!,” “Ben 10”) were all eager to show off their admiration for Howard's tenacious barbarian with unique illustrations that will leave our readers intrigued and craving more! “Cimmerian” #25 also features the final chapter in our "Iron Shadows in the Moon" story adaptation by Tim Truman, Tomás Giorello, and José Villarrubia -- who will be starting their work on “King Conan: The Scarlet Citadel” just as soon as their final pages for “Cimmerian” are in. In our last “Cimmerian” story arc, we're weaving in some characters who will be present in the “Conan: Road of Kings” series, so there will be some "connective tissue" shared between “Conan the Cimmerian” #25 and “Conan: Road of Kings” #1. “Road of Kings” #1 will pick up where “Cimmerian” #25 left off (but with an entirely new creative team), and the new series will continue to tell Conan's life story.
I see “Conan the Cimmerian” #25 as the latest chapter in a massive Conan graphic novel that includes everything from “Conan” #0 to “Conan” #50 to “Cimmerian” issue #s 0 to 25. When readers put down “Cimmerian” #25, I hope they feel compelled to go back to our Eisner Award-winning introductory “Conan” "zero issue" to start reading Conan's life story all over again.

Seriously, why the cats? Nothing irritates me quite like the inappropriate Easter Egg. I can deal with ones that are inobtrusive, and once discovered, don't dominate the scene. But this - there are cats. On a battlefield. Why?
Uttered by Taranaich at 02:00

Labels: Comics, Conan the Cimmerian, Dark Horse, What In Blazes