First Shot of "Conan" - Sort Of

Courtesy of Mikoza over at the Robert E. Howard forums... 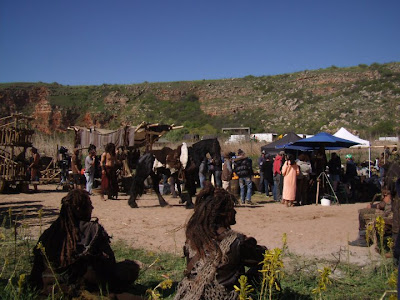 Take a look at this picture. This was taken on the set of "Conan" in Bulgaria. Notice anything unusual? Particularly that tall, muscular, shirtless fellow in the red wraparound?

Well, according to Mr Malmberg, this chap is not Jason Momoa, but his stunt double. Jason is apparently "a bit more buffed up." Still, that technically means that the above picture is our first shot of "Conan" in the new film.

While I'm getting bad Born on the Battlefield flashbacks with the red sari (not helped by Nivekian, who points out the similarities), "Conan" - or at least his stunt double - doesn't look half bad. I'd take a sari over a fur nappy any day. It's difficult to tell, but I have to say if Momo is more buff than the dude in the picture - who already dominates the frame - then the lad's really hit the gym in the past few weeks.

Mr Malmberg hopes to have publicity photos out soon. I'm starting to get really annoyed now. I was content in thinking Momoa might not be an ideal Conan, and that his presence in this film wouldn't be a great loss. Now, he's starting to look pretty damn good... and he's wasted in this. Of course, Lobel & Hood could have, somehow, warped the story into a halfway decent film, but that's hoping against hope.

If all else fails, I'll go the Solomon Kane route: hope that now they have the stupid origin story out of the way, they can get onto the real adaptations. Unrealistic? Sure. But given the choice, I'd rather hope that some good can come of it.
Uttered by Taranaich at 20:30

Labels: Conan the Rehash, Conan: The Wrath of Zym, Momo