Triangulation: Tompk, Solomon Kane on DVD, and Cormac the Terminator

There are still a few things I want to get done before April rolls around, and I only have three days. Eek!

Anyway, on Tuesday I (and others) remember Tompk. We in the REH-verse didn't get the sad news until early April '09, but it's still a blow a year on.

On Thursday, we have some news on the Solomon Kane DVD release. I was sure SK would get over to the US on DVD, but I do hope it gets a theatrical release too, since even with my problems, it's competent enough to deserve a wider audience - if nothing else, it's simply less wretched than a good many other films. I'm not so sure about Berrow's idea to have a screening at Cross Plains, what with it being highly controversial pastiche and all, but the mere fact Berrow's wanting to connect with REH fans speaks volumes. I'm just worried Lionsgate try to pull the same stunt, have the "Conan" trailer debut at Howard Days or the Barbarian Festival, to be met with crickets... or boos.

Saturday has a short one on the Cormac Fitzgeoffrey comic. I remember seeing Joe Jusko's picture on Deviantart and thinking "damn, that's bodaciously gnarly dude." I wish he found a way to fit in the skull shield to help differentiate from Conan. It seems to be down from DA as well, which is disappointing, as it's really good. I'm just hoping it gets the important stuff across, mainly that Cormac Fitz is utterly implacable. You cannot stop him. He's the Crusades version of Reverend Harry Powell, Anton Chigurgh, or Frank Castle. He's Jason Vorhees, Michael Myers, or the Terminator in mortal form, and only slightly less tough or deadly. Once his mind is set on something - be it battle, vengeance or conquest - there is nothing any man can do to stop him.

We're talking about a man who can cave in a man's skull with a punch. A man who can throw battle-axes onto men straddling a castle's gatehouse like they were hatchets, and who can throw lances like javelins against a Turkic horse archer. A man who can fight off a small army while one man is on his back choking him, and another is clinging bodily to his sword-arm - which is still swinging and dealing death despite the extra 150lb+ weight. A man who was struck in the head with a ballista stone - as in, the things that are used to smash holes in ships and castles - and it merely knocked him unconscious.

He can't be bargained with. He can't be reasoned with. He doesn't feel pity, or remorse, or fear. And he absolutely will not stop! Ever! Until you are dead! 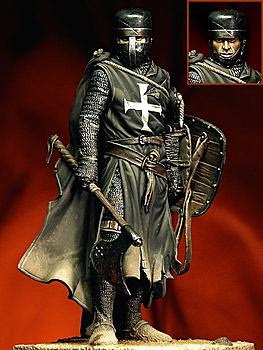 "You cannot escape me! Lead me into a trap and I'll pile the heads of your kinsmen at your feet! Hide from me and I'll tear apart the mountains to find you! I'll follow you to hell!"