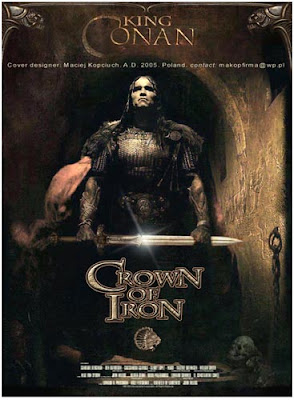 Well, Milius' draft for King Conan: Crown of Iron has been circulating the internet. A Google search will probably take you to one. I'll probably do a bigger post on it some point in the future, but here, I'll just say everything that I hate about Conan the Barbarian is worsened tenfold. Ironhand's parody is not that wide of the mark.

I'm not exaggerating. Remember how Konahn was a slave to destiny and obedient to authority? He's that, and more: he's a spineless, cowardly, weak-willed, stupid, altogether not easy to root for lapdog. Kon is no better, growing up subservient and cowed by his betters while they beat and berate him. Remember how the Hyborian Age was ignored in favour of a pseudo-Bronze Age milieu? Not a single nation in the entire setting is unchanged: civilized nations become barbarian lands and vice versa, Stygia has been wiped out, every nation in the earth is now under the heel of the "Aquilonian" Empire. You know how I hate the Aquiromans of Marvel & Dark Horse comics? Milius doesn't do that: he doesn't even pretend to make them "Roman-like", he just makes them Romans. Period. You could honestly just change every reference of "Aquilonia" to "Rome" and you wouldn't know the difference. Anyone hoping that Milius would adapt a real Howard story will be sorely disappointed.

Oh, but of course, that doesn't mean Milius doesn't strip-mine Howard for good bits, taking them out of context and diluting their impact. He steals themes and elements from "The Frost-Giant's Daughter," "The Phoenix on the Sword," and The Hour of the Dragon. He also includes some lines of Howardian poetry from "A Song of the Naked Lands" and "A Word from the Outer Dark." These are by far the only Howardian elements in the entire script, and they ring devastatingly hollow when recited by Conan. And, of course, DeCamp manages to muscle in, as his "Lair of the Ice Worm" gets a more respectful homage than any of the Howard stories, just like "The Thing in the Crypt" in Conan the Barbarian.

It isn't just the Howard aspect that suffers, but internal consistency. Milius can't decide whether Rome has iron or steel, which is a major part of the script. He also can't make up his mind whether Zingara is a province of "Aquilonia," or merely an allied state. His philosophy and metaphor is woolly and self-contradictory. Perhaps most damning of all, however, is that this script contradicts Milius' own Conan the Barbarian. I could almost--almost--look over the hash Milius makes of the Hyborian Age, since this is just nothing new. But here, Milius seems to forget what happened in his own damn movie. For instance, remember how Konahn "becomes a king by his own hand"? That doesn't happen. And the inversion of Conan is complete. This is Bizarro-Conan, the Hyborian Age of the Mirror Universe, Earth-3. The opposite of the real Conan.

Remember how I said I'd rather see Crown of Iron than the upcoming abomination? Well... I don't know if that's true any more. Somehow, Milius manages to make his usurpation and subversion of Howard's themes and characters even worse. There is zero trace of Howard's Conan in the pathetic creature in this script. The age he lives in is unrecognizable. It's almost a parody of Howard's work, and I would laugh if I didn't realise this is supposed to be serious. And, here's the clincher: I don't think Milius fans will like it. It lacks the simplicity and elegance of Conan the Barbarian, with a rash of unnecessary characters, reams of pages and subplots that could be cut, and many of the disparate elements fail to gel together.

There are many scenes in this script where I bellowed "Oh COME ON!" in indignation and surprise, but it occurred to me that it isn't just because it's an affront to Howard, but an affront to Conan the Barbarian. I get the distinct feeling that Milius fans are going to do a lot of the same things, as Conan does things that are unspeakably cowardly, and bends without resistance to others' will. I wouldn't be surprised if Milius fans will look on Crown of Iron as the Konahn equivalent of Indiana Jones & the Kingdom of the Crystal Skull or The Lost World: Jurassic Park: a fall from grace from the director of a classic. Sure, it'd probably be quite successful financially, but the fans of the 1982 epic might feel slighted, offended, and betrayed.

Well, misery loves company. Maybe then they'd understand what us Howard fans are talking about.
Uttered by Taranaich at 10:49