First of all, casting news. Yeah, no amount of script doctoring is going to save this mess. I've softened on Momo: he still isn't perfect, but I've gotten used to him. I wouldn't even mind him *too much* in a real Conan film, as long as everything else was pitch-perfect. As with Deuce, I'd operate on a "wait-and-see" approach. I like Rourke, and found him tremendously impressive in The Wrestler, but I wouldn't pick him for Corin personally. I still hate the entire character of Ukafa, but I guess Bob Sapp's going to be about as decent as can be expected for a former MMA fighter.

Monday paid a visit to Nick Owchar. When you see review upon review of half-arsed, poorly-researched scribbles from idiot journalists about pulp writers, a guy like Nick is a sight for sore eyes. Even if he did go for Moorcock that one time. Also, I'm going to take this opportunity to wax lyrical about getting name-checked in the L.A. Times! Yahoo!

Tuesday, and I'm still stunned at the REH Foundation Awards announcement. Sadly, it doesn't look like the winners be getting one of those nifty skull trophies in favour of plaques. Ah well.

Saturday's usual is a quick link to Two Gun Blog. Mitra smile on the Keegans.

I'm going to shoot ahead to today's post confirming that Rachel Nichols will be Tamara, as well as the rumours of Stephen Lang for Khalar Singh (AAAAARGH) and Nonso Anozie as Artus, which makes as much sense as casting Will Smith as Elrond. Fun fact: a while back, I talked about how much I'd love to see Diora Baird as Ilira. Both Nichols and Baird played Orion women in the recent Star Trek (Baird's scene being cut, sadly) - Orion women being those infamous Green-Skinned-Alien-Babes from the original series. So you can see how it would be exquisitely entertaining to me to have the two reunited in Conan. Might even tempt me to go see the film: gotta have something to take my mind off the garbage they're doing to Conan and Howard. Scientific studies show that male logic is impaired by the sight of scantily clad women. It's just logical for bad movies to cram the screen full of sexy girls to stop men from thinking too much.

Also, I'm going to take this opportunity to post a few pictures of Rachel I really, really wanted to post over at TC, but I guess I didn't want to make things too unsafe for work viewing, nor to insult our female Cimmerian viewers: 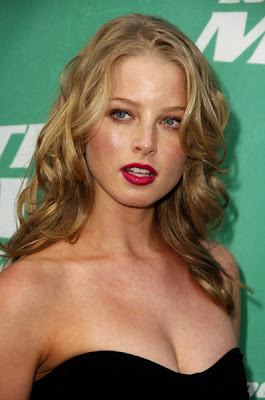 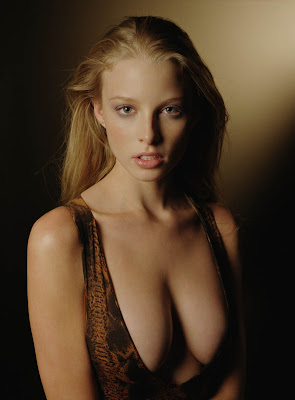 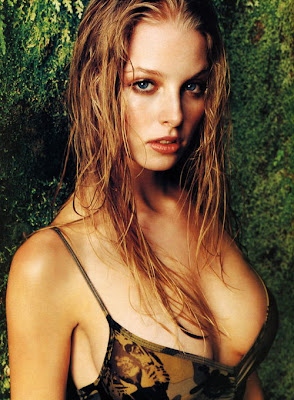 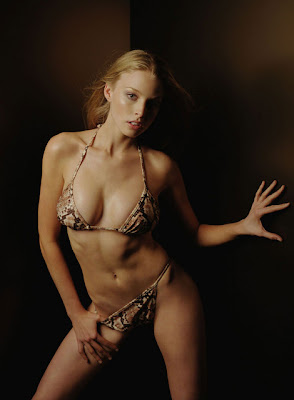 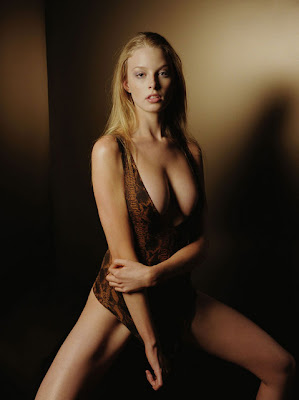 She may not be a Frazetta goddess, but damn.

(Of course, wishing to spare female readers' sensibilites might be considered patronising, seeing as they regularly get to see shirtless muscular chaps at TC, not least a bareshirted Robert E. Howard in the upper right, so it's ultimately self-defeating. Whatever, I'm just going to gawk a little more.)
Uttered by Taranaich at 22:53

Labels: My Word, The Cimmerian, Triangulation