Whither No Man Had Gone Before: H.P. Lovecraft

The 14th of March is the nativity of Algernon Blackwood, who was a marked influence on H.P. Lovecraft. In a bit of cosmic coincidence, the 15th of March was an anniversary for the Rhode Island Raconteur, but it would mark that other defining day of a man’s existence on Earth. As with Gaius Julius Caesar, the Ides of March would see Lovecraft pass from this plane of existence through the Veil of Negative Existence.

Even since that day, the shade of Lovecraft has cast a dark shadow over the field of weird fiction–and in my personal reading. 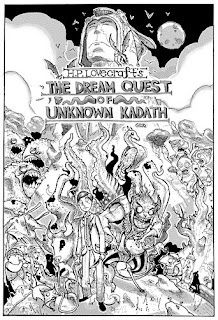 Ben Avery's adaptation of "The Dream Quest of Unknown Kadath" illustrated by Leong Wan Kok is nothing short of sublime.


I read Lovecraft before I read Conan. Being at college, it’s natural that the disaffected youths on my course would introduce me to the master of cynical cosmic horror, suggesting I’d be pretty good at illustrating some of his weirder creations. My interest was piqued: I read a number of the stories, including the infamous “The Call of Cthulhu,” “The Shadow Over Innsmouth,” and “At the Mountains of Madness.”

Needless to say, I was floored by the stories. The creatures were certainly new to me, and I adored the repulsive, alien descriptions of the Mi-Go, the Deep Ones, the Elder Things, the Great Race of Yith, and of course the Big Kahuna (Big Kathulnha?) himself. However, that wasn’t all that impressed me: it was that most quintessential of Lovecraftian inventions, cosmic horror. I’d never read horror quite like this, certainly not on this scale. In most horror, the danger is on the personal level: a few lives, perhaps many, menaced by worldly fears. At the absolute limit, human civilization was threatened in some sort of apocalypse involving the undead or some alien invasion. Lovecraft made the situation even more hopeless than that: not merely the reader, his family, his country, or humanity, but the entire cosmos was the victim.

Cthulhu waits dreaming under Rl’yeh for the time when the stars will allow him to emerge, where the lucky ones are those devoured first before they can go mad. Some day, Nyarlathotep could visit untold suffering upon the living things in the galaxy on a whim. At any moment, Azathoth could awaken from his sleep, and rend the universe to pieces in his waking. It’s dark stuff, needless to say. Lovecraft’s own pessimistic worldview imbues his work with a quality that can only be described as abysmal, in the true sense of the word: the fathomless, black gulf of The Abyss permeates his work.

Nonetheless, there’s more to Lovecraft than cosmic horror: his other great contribution to speculative fiction is in his Dreamland tales. Though suffused with no small measure of darkness and the sinister, the Dream Cycle are balanced with a sense of inspiring, almost joyous wonder, the type reserved for tales of Faerie and the Fantastique. Few of the Dreamland stories are as full of this magnificent adventure as “The Dream-Quest of Unknown Kadath.”

Far and away, this is my favourite of Lovecraft’s stories, perhaps because it was unlike anything I was expecting. I started off with the cosmic horror and Poe-esque gothic chillers, so I expected the type of doom and gloom Lovecraft does so characteristically. Yet “Dream-Quest” announce from the first paragraph, the first sentence, that this was not going to be an exercise in terrifying revelations about man’s place in eternity.


Three times Randolph Carter dreamed of the marvelous city, and three times was he snatched away while still he paused on the high terrace above it. All golden and lovely it blazed in the sunset, with walls, temples, colonnades and arched bridges of veined marble, silver-basined fountains of prismatic spray in broad squares and perfumed gardens, and wide streets marching between delicate trees and blossom-laden urns and ivory statues in gleaming rows; while on steep northward slopes climbed tiers of red roofs and old peaked gables harbouring little lanes of grassy cobbles. It was a fever of the gods, a fanfare of supernal trumpets and a clash of immortal cymbals. Mystery hung about it as clouds about a fabulous unvisited mountain; and as Carter stood breathless and expectant on that balustraded parapet there swept up to him the poignancy and suspense of almost-vanished memory, the pain of lost things and the maddening need to place again what once had been an awesome and momentous place. 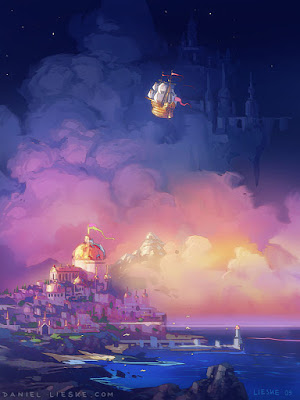 Music to my ears, folks. A welcome paradigm shift into my most favoured of genres: adventure! “Dream-Quest” promised everything I love most in fiction–the discovery of new lands and places, encounters with strange and marvellous beings, meetings with fascinating and unusual peoples, the visions of beauty and wonder as yet unseen by explorers’ eyes. Combat with dangerous foes and a mad flight from monstrous horrors are not necessary, but would be relished with aplomb (and they indeed were.) A few paragraphs later, this excitement was galvanized to a fever pitch:

At length, sick with longing for those glittering sunset streets and cryptical hill lanes among ancient tiled roofs, nor able sleeping or waking to drive them from his mind, Carter resolved to go with bold entreaty whither no man had gone before, and dare the icy deserts through the dark to where unknown Kadath, veiled in cloud and crowned with unimagined stars, holds secret and nocturnal the onyx castle of the Great Ones.


To go with bold entreaty whither no man had gone before. If you’ve ever enjoyed an episode of Star Trek, you might feel a shiver run down your spine at the significance of that phrase. Randolph Carter setting out to explore a strange new world, seek out new life and new civilization, and bravely treading lands yet untrodden by the feet of humanity. And explore he does: Carter travels through the wondrous cities of Dylath-Leen, Baharna, Celephaïs, and ancient Sarkomand; he meets eclectic and mysterious beings such as the Zoogs, Moon-Beasts, Night-Gaunts, Ghouls, Gugs, Ghasts, Bholes, and even the Gods of Dreamland; he witnesses the majesty of the Enchanted Wood, the Moon, the Vale of Pnath, the Plateau of Leng, and the enigmatic Kadath itself. Adventure, mystery, danger, terror and wonder abound in this marvellous tale.

What more could one ask for?
Uttered by Taranaich at 13:00