BeastieScotInktoberFest: #9 - The Blue Men of the Minch 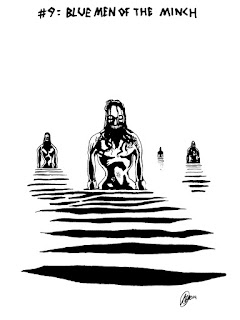 The Blue Men are found only in the Minch, and chiefly in the strait which lies between the Island of Lewis and the Shant Isles (the charmed islands), and is called the " Sea-stream of the Blue Men". They are not giants, like the Nimble Men, but of human size, and they have great strength. By day and by night they swim round and between the Shant Isles, and the sea there is never at rest. The Blue Men wear blue caps and have grey faces which appear above the waves that they raise with their long restless arms. In summer weather they skim lightly below the surface, but when the wind is high they revel in the storm and swim with heads erect, splashing the waters with mad delight. Sometimes they are seen floating from the waist out of the sea, and sometimes turning round like porpoises as they dive.
- Donald Alexander Mackenzie, Wonder Tales from Scottish Myth & Legend


Now for something really scary... While many nations have their equivalents to Kelpies, sea serpents, and bogles, the Blue Men are peculiar to Scotland alone. It's probably just as well, as the idea of long-armed, creepy humanoids floating out on the open sea from the waist up is quite a frightening image. This aspect was rather cleverly theorised by Sophia Kingshill as a folk memory of woad-painted Pictish Warriors travelling with low kayak-like canoes, which might indeed somewhat resemble people eerily floating from the waist up. An alternative explanation is that the "Blue Men" were in fact black - daoine gorm, rendered in English, literally means "blue people," but is used to refer to people with dark skin - and is a folk memory of Viking or Roman slaves, who would understandably be very unusual to people on the very edge of the world.

Mackenzie relates one tale of the Blue Men, where their love of poetry and messing with ships at sea is highlighted:

In days of old the " Blue Men's Stream " was sometimes called " The Current of Destruction ", because so many ships were swamped in it. The people blamed the Blue Men, who dwelt in caves, Nimble Men, Blue Men, &c. Si they said, at the bottom of the sea. Their sentinels were always on the look-out, and when a vessel came in siofht, word was sent to the men o in the caves to come up. Sailors were afraid of them, and many sailed round the Shant Islands instead of taking the short cut between these and the big Island of Lewis. When the chief of the Blue Men had all his men gathered about him, ready to attack a ship, he rose high in the water and shouted to the skipper two lines of poetry, and if the skipper did not reply at once by adding two lines to complete the verse, the Blue Men seized the ship and upset it. Many a ship was lost in days of old because the skipper had no skill at verse. True is the Gaelic saying, however: "There comes with time what comes not with weather."

One day, when the wind was high and the billows rough and angry, the Blue Men saw a stately ship coming towards their sea-stream under white sails. Royally she cleft her way through the waves. The sentinels called to the blue fellows who were on the sea floor, and as they rose they wondered to see the keel pass over- head so swiftly. Some seized it and shook it as if to try their strength, and were astonished to find it so steady and heavy. It carried on straight as a spear in flight. The chief of the Blue Men bobbed up in front  of the ship, and, when waist-high among the tumbling waves, shouted to the skipper:

"Man of the black cap, what do you say
As your proud ship cleaves the brine?"


No sooner were the words spoken than the skipper answered:

"My speedy ship takes the shortest way,
And I'll follow you line by line!"


This was at once an answer and a challenge, and the chief of the Blue Men cried angrily:

"My men are eager, my men are ready
To drag you below the waves!"


The skipper answered defiantly in a loud voice:

"My ship is speedy, my ship is steady,
If it sank it would wreck your caves!"


The chief of the Blue Men was worsted. Never before had a seaman answered him so promptly and so well. He had no power to injure the ship, because the skipper was as good a bard as he was himself, and he knew that if he went on shouting half-verses until the storm spent itself the skipper would always complete them. He signaled to his followers to dive; and down below the wave ridges they all vanished, like birds that dive for fish. The big ship went on proudly and safely under snow-white, wind-tight sails while the sea-wind through the cordage sang With high and wintry merriment.


Also included is this haunting song of the Blue Men, attributed to Scottish boatmen:

When the tide is at the turning and the wind is fast asleep,
And not a wave is curling on the wide, blue deep,
Oh, the waters will be churning in the stream that never smiles,
Where the Blue Men are splashing round the charmed isles.

As the summer wind goes droning o'er the sun-bright seas,
And the Minch is all a-dazzle to the Hebrides,
They will skim along like salmon, you can see their shoulders gleam,
And the flashing of their fingers in the Blue Men's Stream.

But when the blast is raving and the wild tide races,
The Blue Men are breast-high with foam-grey faces;
They'll plunge along with fury while they sweep the spray behind,
Oh, they'll bellow o'er the billows and wail upon the wind.

And if my boat be storm-toss'd and beating for the bay,
They'll be howling and be growling as they drench it with the spray
For they 'd like to heel it over to their laughter when it lists,
Or crack the keel between them, or stave it with their fists.

Oh, weary on the Blue Men, their anger and their wiles!
The whole day long, the whole night long, they 're splashing round the isles;
They'll follow every fisher ah! they'll haunt the fisher's dream-
When billows toss, Oh, who would cross the Blue Men's Stream!