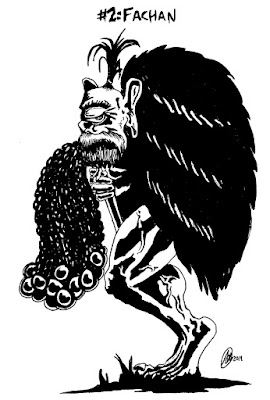 ... A "FACHAN" is thus described: - "Ugly was the make of the Fachin; there was one hand out of the ridge of his chest, and one tuft out of the top of his head, it were easier to take a mountain from the root than to bend that tuft."
- Popular Tales of the West Highlands

He held a very thick iron flail-club in his skinny hand, and twenty chains out of it, and fifty apples on each chain of them, and a venomous spell on each great apple of them, and a girdle of the skins of deer and roebuck around the thing that was his body, and one eye in the forehead of his black-faced countenance, and one bare, hard, very hairy hand coming out of his chest, and one veiny, thick-soled leg supporting him and a close, firm, dark blue mantle of twisted hard-thick feathers, protecting his body, and surely he was more like unto devil than to man.
- Beside the Fire: A Collection of Irish Gaelic Folk Stories, Douglas Hyde


There are a number of ways one could imagine the Fachan, but I felt the Celtic Druid theory was so strong & interesting a possible explanation that it was the best route to lean into, and save something more monstrous and frightening for another beastie. To that end, I was heavily inspired by the illustration which appeared in Popular Tales of the West Highlands, and borrowed the twenty-tailed, fifty-headed flail from the desert creature of Glen Eite.
Uttered by Taranaich at 18:00