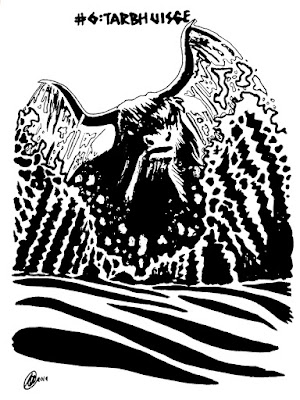 Clanronald told us, as an instance of Highland credulity, that a set of his kinsmen - Borradale and others - believing that the fabulous `water-cow' inhabited a small lake near his house, resolved to drag the monster into day. With this view they bivouacked by the side of the lake in which they placed, by way of night-bait, two small anchors such as belong to boats, each baited with the carcase of a dog slain for the purpose. They expected the `water-cow' would gorge on this bait, and were prepared to drag her ashore the next morning, when, to their confusion of face, the baits were found untouched. It is something too late in the day for setting baits for water-cows.
- Walter Scott, Sir Walter Scott: Diary, Letters & Articles


The Tarbh Uisge, "Water Bull," has many of the hallmarks of its more notorious & malevolent kindred spirite, the Each Uisge ("Water Horse," the Kelpie's dangerous cousin). It, too, is a resident of the waters of Scotland; it usually manifests in its male form, as evidenced by its Gaelic name; and is known for its shapeshifting qualities. A curious aspect to their physiognomy is their ears: unlike the familiar ears of normal cows, the Water Bull lacks external ears entirely - possibly an adaptation to its underwater domain, as seen in pinnipeds and cetaceans.

Where water horses tend to menace female humans, it's the cattle which are at greatest threat to water bulls. The offspring of a union between water bull and land cow are marked by their stunted ears: these unfortunate calves are named Corc-Chluassask (Split Ears) or Carechluasach (knife or short ears):


But while the waters of the south can only boast of their kelpy, those of the north are the habitation not only of the uirisg, but of the water-horse and water-bull (An t'Each Uisge,  'san Tarbh Uisge) as well. These last are painted on  that tablet of the popular mind consecrated to super-  stition, as, upon the whole, upon the whole, of the same shape and form as the more kindly quadrupeds after whom they have been named, but larger, fiercer, and with an amount of `devilment' and cunning about them, of which the latter, fortunately, manifest no trace. They are always fat and sleek, and so full of strength and spirit and life that the neighing of the one and the bellowing of the other frequently awake the mountain echoes to their inmost recesses for miles and miles around...

Calves and foals are the result of occasional intercourse between these animals and their more civilised domestic congeners, such calves bearing unmistakable proofs of their mixed descent in the unusual size and pendulousness of their ears and the wide aquatic spread of their jet black hoofs; the foals, in their clean limbs, large flashing eyes, red distended nostrils, and fiery spirit. The initiated still pretend to point out cattle with more or less of this questionable blood in them, in almost every drove of pure Highland cows and heifers you like to bring under their notice.
- Alexander Stewart, Twixt Ben Nevis and Glencoe: The Natural History, Legends and Folklore of the West Highlands (1885)

From a more mundane perspective, one could suppose that it was an explanation for crop ear among cattle:


Like many mythologies Celtic mythology embraces the existence of a mysterious creature called a water-bull ( ref. Maier ). The survival of legends through the oral tradition in Scottish Gaelic folklore makes it impossible to date the arrival of water-bulls, or the Tarbh Uisge, which for centuries appeared unpredictably in and around the sea and lochs of the Hebridean Islands and West Highlands of Scotland. However, the folklore has preserve comment on both behaviour and appearance of the Tarbh Uisge. Seemingly the Tarbh Uisge itself is rarely seen, it emerges from the water at night and covers ashore cows, and the resulting progeny are very easily identified as those sired by a water-bull. Such a mythical bull is called Tarroo-Ushtey in the Isle of Man, and there are also water-bull myths in Germany, but the Hebridean Tarbh Uisge is distinct in that it is given specific attributes: Tarbh-Uisge is a large black bull with velvety fur, he has no ears and his calves have slotted ears.

When the explorer Martin Martin, on his journey to the Hebrides in 1695 visited the Isle of Skye he documented this legend writing " There are several calves that have a slit at the top of their ears; and these the natives fancy to be the issue of a wild bull that comes from the sea or fresh lakes; and this calf is by them called corky-fyre "(Martin ). In the extensive collection of “Popular Tales from the West Highlands” (Campbell) an island resident reported in 1862 that he had "often seen bulls feeding about the lake sides with the cattle, and the cows often had calves. They are `corcach´, short-eared, a cross between the water-bull and a land-cow ". And A. Carmichael, who collected Gaelic songs, rhymes and legends in late 19th century, wrote “These notch-eared cattle - ` Torc Chluasach ' - are frequent in the Western Isles and are spoken of as `Slioc a Chroidh Mhara', the descendants of the fabled sea cattle."