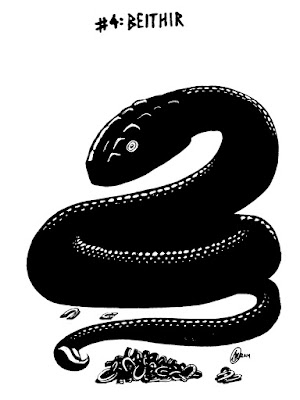 A serpent, whenever encountered, ought to be killed. Otherwise, the encounter will prove an omen of evil. The head should be completely smashed (air a spleatradh) and removed to a distance from the rest of the body. Unless this is done, the serpent will again come alive. The tail, unless deprived of animation, will join the body, and the head becomes a beithir, the largest and most deadly kind of serpent.

The big beast of Scanlastle in Islay was one of this kind. It devoured seven horses on its way to Loch-in-daal. A ship was lying at anchor in the loch at the time, and a line of barrels filled with deadly spikes, and with pieces of flesh laid upon them, was placed from the shore to the ship. Tempted by the flesh, the "loathly worm" made its way out on the barrels and was killed by the spikes and cannon.

- Superstitions of the Highlands and Islands of Scotland, John Gregorson Campbell, 1900

The Beithir is one of many serpentine creatures one can find in the folklore of Scotland - all the more unusual, since the moors & glens aren't exactly the ideal habitat for reptiles. The fact that one beast devoured seven horses (which I hinted towards in the illustration) suggests it was a mite larger than Scotland's modern reptiles, like the adder or the slow worm.

Being a fan of The First Fossil Hunters, I also look towards prehistoric inspiration: could the Beithir be some long-embedded memory of the great ophidians which terrorised humanity's ancestors? The Titanoboa of Columbia has a lot of press nowadays, but before its discovery, the 30ft+ Gigantophis slithered through what is now Egypt some 40 million years ago. Scottish mythological enthusiasts will know the importance of Egypt in Scotland's cultural memory.

The Beithir might also be known to Dungeons & Dragons fans as a possible inspiration for the Monster Manual II's Behir, another serpentine beastie ready to gobble up any unwary adventurers.
Uttered by Taranaich at 18:00