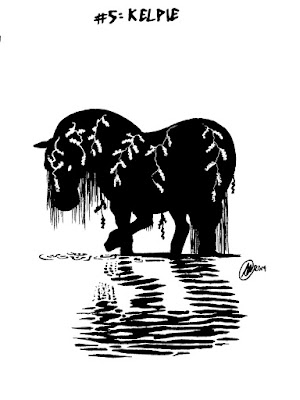 When thowes dissolve the snawy hoord
An' float the jinglin icy boord
Then, water-kelpies haunt the foord
By your direction
An' nighted trav'llers are allur'd
To their destruction.
- "Address to the Devil," Robert Burns, 1786

The legends of the doings of the water kelpie all point to some river god reduced to a fuath or bogle. The bay or grey horse grazes at the lakeside, and when he is mounted, rushes into the loch and devours his rider. His back lengthens to suit any number; men’s hands stick to his skin; he is harnessed to a plough, and drags the team and plough into the loch, and tears horses to bits; he falls in love with a lady, and when he appears as a man, and lays his head on her knee to be dressed, the frightened lady finds him out by the sand amongst his hair. “Tha gainmheach ann,” “There is sand in it,” she says, and when he sleeps he makes her escape. He appears as an old woman and is put to bed by a bevy of damsels in a mountain sheiling and he sucks the blood of all, save one, who escapes over a burn, which, water horse he is, he dare not cross. In short, these tales and beliefs have led me to think that the old Celts must have had a destroying water god, to whom the horse was sacred, or who took the form of a horse.
- Popular Tales of the West Highlands, J.F. Campbell


Kelpies are among the most well-known & well-documented of Scottish mythological terrors, featuring in literature, art, sculpture, and beyond. Campbell's supposition that it is the folk memory of a great, dangerous water deity is pretty compelling considering the importance of horses in old Celtic folklore.

Most modern cultural depictions of Kelpies tend to eschew the more supernatural elements like the human transformation: they tend to be either weird aquatic equines, seaweed-strewn Hippocampi, or plant monsters. For my part, if we're going that route, I quite like the idea of some ancient prehistoric relative that developed a taste for meat: as Andrewsarchus is essentially a sheep in wolf's clothing, perhaps there's some hitherto undiscovered species of carnivorous horse.

Nonetheless, the human form aspect is one of the most important parts of the Kelpie myth, as surely as it is for werewolves and Selkies. As such, I figured I'd reflect that in the picture (ho ho).
Uttered by Taranaich at 18:00