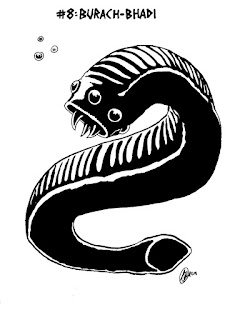 The Burach Bhadi, also known as the Wizard's Shackle, lives in the Western isles of Scotland. It is an eel or leech with nine squinting eyes and a horrible habit of entwining itself around a horse's legs, pulling the animal down to die.
- Joyce Hargreaves, Hargreaves New Illustrated Bestiary


This is another creature that is difficult to track down. The notion of a particularly large species of eel or leech dwelling in the Western Isles is not the most unusual one, though the nine eyes adds a bit of flavour. Burach is a weel-kent Gaelic word which made its way into Scots vernacular, usually a synonym for "mess; muddle; shambles", sometimes compared with "digging a hole" - all things that make sense for eel/leech/worm-like creatures. Bhadi, on the other hand, is a bit more of a mystery , as is the origin of the "Wizard's Shackle" nickname (more research needed).

Of course, leeches are known to dwell in Scotland's waterways, notably the infamous Hirudo medicinalis, which was used to treat all sorts of ailments in Medieval society. It's easy to see people imagining a particularly large relative of the Medicine Leech inhabiting the lonely lochs and burns. The treacherous marshes, bogs, and quagmires would be a trial for any horse to navigate - suggesting that the Burach-Bhadi was a warning against careless equestrians.

Alternatively, many large eels have turned up on Scottish shores over the centuries: the Giant Oarfish, the "King of Herrings," can occasionally be sighted around Scottish waters, and will be discussed further on other Beastie posts.
Uttered by Taranaich at 18:00