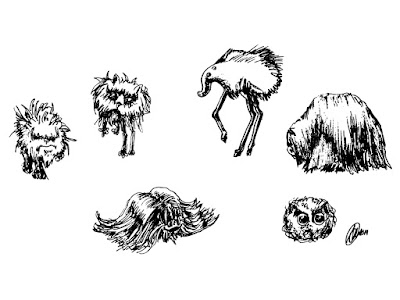 My heart’s in the Highlands,
twa strings on my bow
To hunt the fierce haggis,
man’s awfu’est foe.
And weel may my bairn
ha’ a tear in his ee.
For I shallna come back
if the haggis hunts me.
- James J. Montague, The New York Tribune, 2nd January 1924


Ah, that most feared & beloved of Scottish beasties, the Wild Haggis. Elusive yet ubiquitous, they're rare enough to be seldom seen in the wild, yet populous enough to feed 5.4 million Scots every Burns' Night. Some say they are small furry mammals, others that they are little birds with vestigial wings; some say their right (or left) legs are longer than the others to facilitate mountain navigation at the cost of reproductive opportunity, while others suppose that they have only three legs, or even no legs at all; there are those who compare their call with the drone of the bagpipes, and others who equate it with a whistly twittering.

There are regional variations, of course. Those Haggis which perambulate around the hills and mountains have two known species based on the direction most amenable to their gait: the Deisul Haggis (Haggis scottii dexterous, also known as the Sunwise Haggis) & the Widdershins Haggis (Haggis scottii dexterous, or the Taibhse Tuathal in the Gaelic heartlands), who are forced to travel clockwise and anti-clockwise respectively by their biology. The Golden Haggis of Lewis (Haggis limnuensis) - an even-legged variety - is prized not just for its meat, but its fur, which was traditionally used to adorn the sporrans of Lewis's menfolk. The near-legendary Great Haggis (Haggis magnificens), now thought to be either extinct or hiding with Nessie, was an enormous breed which could feed an entire village from St. Andrew's Day to Burns' Night, as documented in The Capture of the Great Haggis, 1743. All varieties are believed to be derived from the ancient Hebridean Haggis (Haggis hebudensis), a small and hardy creature especially adapted to the rough lands of the Western Isles in a manner not unlike the famous Shetland Pony.

A pseudoscientific fad in recent years claims that the Wild Haggis are not real, and that it is merely a Scottish culinary staple given some local flavour. Such attacks against science & history are not to be dignified with a response.
Uttered by Taranaich at 23:28