Jurassic Park and the End of Man's Dominion 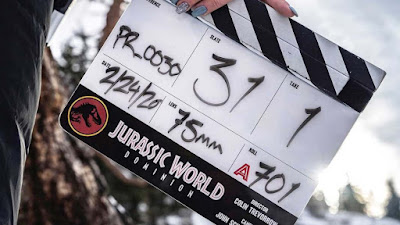 In which I ponder the new title for the upcoming third Jurassic World film, and how it relates to Robert Burns.

Because that's the sort of Venn Diagram this blog is all about. 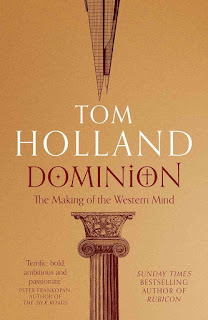 Already folk are speculating over the meaning of Jurassic World: Dominion, which has supplanted Jurassic World: New Era. It isn't the first time in the franchise we had such a significant name change: the Malusaurus became the Diabolus, which became the MURDERSAURUS Indominus we all know and hate. But it's one that's worth exploring.

Dominion itself is a fairly common word nowadays, but if you look, you can find all sorts of possible allusions. Etymologically speaking, the word first appears in the 15th Century. Dominion ultimately derives from Latin - dominium (property, ownership) and dominus (lord, master). As with much in western culture, we must go Biblical. Consider the King James version of Genesis 1:28, published in 1611:

And God blessed them, and God said unto them, "Be fruitful, and multiply, and replenish the earth, and subdue it: and have dominion over the fish of the sea, and over the fowl of the air, and over every living thing that moveth upon the earth."

"Dominion" used to signify humanity's rule and ownership of all other life on earth is repeated throughout the Bible, in multiple iterations and translations, to the point where it became the subject of political ideologies. Dominions are also the name given to a particular form of angel in Christian Angelology, the regulators of angels lower than the terrifying Seraphim, Cherubim, and Thrones. The relevance of angels - beings placed in a cosmic heirarchy who must ultimately bow before humans at the command of their creator - in a story about genetically recreated dinosaurs threatening humanity's self-appointed rule over the earth is rather potent, even if I doubt this is exactly what the filmmakers have in mind!

Dominion spread beyond the Bible fairly shortly. Most famously, Oliver Cromwell was "Lord Protector of the Commonwealth of England, Scotland and Ireland, and the dominions thereto belonging" in May 1649. Later, during the time of the British Empire, the word (capitalised) was used for British colonies with a certain degree of autonomy, most of which - Canada, Australia, South Africa, New Zealand, Ireland, and Newfoundland - are now members of the Commonwealth. Dominions, therefore, were a bit above the likes of the Indian Raj and the American Colonies, though still not on the level of the United Kingdom itself. As such, the word "Dominion" has strong links to colonialism.

Jurassic World, like Jurassic Park before it, is steeped in colonial resonance, from the general themes of man's transgressions against the natural order, to the White Hunters in Robert Muldoon and Roland Tembo, down to the very architecture of the Visitor Centre itself (which was built at the Valley House Plantation Estate). J.A. Bayona's most famous work, The Orphanage, is as much an exploration of 1970s social anxieties as it is a love letter to contemporaneous horror films; likewise, A Monster Calls is a fairytale of palliative care as much as Pan's Labyrinth is to the Spanish Civil War. As such, while the inevitable childproofing of more daring elements for "international cultural considerations" (i.e. markets) may have affected the film, Bayona still let some of his vision seep through the studio shroud.

The composition - the greatly accomplished Óscar Faura worked as cinematographer for the film - is full of visual cues. The beurocrat-turned-dinosaur rights activist Claire Dearing, whose interests are primarily the welfare of the dinosaurs, meets Eli Mills, who we learn (predictably enough in a Jurassic film) is ultimately more interested in profit. The map behind them shows two worlds - the New World, and the Old World. Not just any map - it looks very much like Mathew Carey's 1795 Map of the World from the Best Authorities, from the first Atlas published in the United States. That in itself is full of meaning - future versus past, modern considerations versus lasting traditions, not to mention Carey's own political activism, indeed his very nature as a Dublin-born American patriot. And of course, one of the themes of colonialism is the old, rich civilisations of the Old World coming to the verdant lands of the New World, with plunder and exploitation on their minds.

Lockwood Manor is full of nods and hints to palaeontological history as well. Behold the portraits adorning the walls:

The gentleman in the painting next to John Hammond, cradling what appears to be a theropod skull, is almost certainly William Buckland - a theologian who also happened to provide one of the very first modern descriptions of a dinosaur. The painting appears to be a mirror image of Samuel Cousins' 1833 mezzotint (swapping a cave hyena skull with something a bit more "on topic"). The identity of the others is, alas, a mystery to me (the woman bears more than a passing resemblance to Richard Rothwell's portrait of Mary Shelley, while the middle painting on the staircase could be Johannes Scheuchzerus) - though it is the sort of thing that'd keep me awake at night.

Countries like Costa Rica - which happens to be off the coast of Jurassic Park's Isla Nublar - occupy a curious place in American political dynamics. It is economically stable, has excellent education and healthcare, pioneered modern environmental protections, and is completely demilitarised, leading to its preeminent position as centre for conflict resolution. It never even directly fought for its independence - it was declared so practically by proxy - until it had to choose between independence and being part of another empire. Yet it is only across the border from Nicaragua (much poorer & with inferior quality of life) and Panama (which is still recovering from the 1980s) - two countries which charted very different paths with the fate they were given. Costa Rica was probably Hammond's best bet, all things considered.

But that's all for another post. Back to Dominions. The notion of Man being above other animals is hardly unique to Abrahamic or Western cultures. The Black Hills Native Americans attribute man's relationship with buffalo to the outcome of a Great Race; Buddism says that while many beings are sentient, only humans can achieve enlightenment; humans occupy a rung on the Hindu ladder higher than most other animals (except cows, because of course they do). It is predicated on the one intangible thing which marks humans as distinct from other animals - the cognitive revolution which gave rise to our languages, our sciences, our stories. Perhaps it isn't that Man rules the earth because Man is inherently superior - perhaps it's because Man is the only animal that thinks it is.

Which brings me to Robert Burns.

In his poem "To A Mouse - On Turning her up in her Nest, with the Plough" (September 1785), the author laments accidentally destroying a field mouse's home with his farm equipment. The second verse directly mentions "Man's dominion," clearly meant in a Biblical sense:


No, I'm not arguing that the filmmakers are quoting a famous old Scottish poem. I am, however, saying that it's a very apt coincidence all the same - especially considering the final paragraphs, which note that while the mouse lives in the moment, man is cursed forever looking back and forward:

But Mousie, thou art no thy lane,
In proving foresight may be vain;
The best-laid schemes o’ mice an’ men
Gang aft agley,
An’ lea’e us nought but grief an’ pain,
For promis’d joy!

Still thou art blest, compar’d wi’ me;
The present only toucheth thee:
But och! I backward cast my e’e,
On prospects dreaer!
An’ forward, tho’ I canna see,
I guess an’ fear!

The Jurassic world is a perfect combination of both: a yearning for a prehistoric past humanity never witnessed given terrible life by the science of the not-too-distant future. Meta-textually, too, one could consider the nostalgia of the original Jurassic Park and its relationship with future explorations of that world. Alas, the "best-laid schemes" went horrifically wrong, as arrogant humanity crashed their plough into the natural world - with something rather more dangerous and toothy than a field mouse looking back through the field.

Will Jurassic World see Man's Dominion laid low? After decades - centuries, millennia - of asserting our presumed dominance over the Animal Kingdom rather than acknowledging our place within it, could it be monsters of a time long before would challenge us?