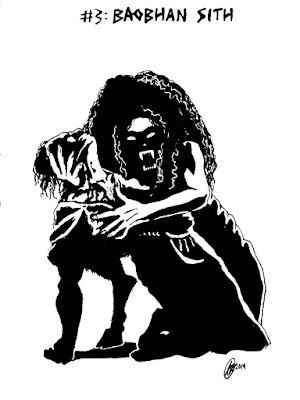 Wouldn't be long until vampires started baring their fangs in BeastieScotInktoberFest. There are a number of bloodsucking horrors in Scottish folklore, but I thought this creature - which sometimes has the hind legs of a deer, and other times transforms into a raven, & depicted here with wild frizzy hair because reasons - offered a nice inversion of the usual male vampire grasping a gasping, chest-baring female victim.

After the break, a story of the Baobhan Sith...


The Hunters and the Maidens

Four men from Strathmore, who were hunting among the hills, sought shelter one night in the shieling at Airigh nan Guthach, between Loch Droma and Braemore. To while away the time, one of them supplied vocal music puirt-a-beul while the others danced. One of the dancers ere long gave utterance to a wish that they had partners. Presently four young women came into the hut. After some introductory conversation, partners were appropriated, one of the women seated herself by the musician, and dancing was resumed, and was now carried on with much more vigour and enjoyment.

After some time spent thus, one of the men observed drops of blood falling from one of his companions. Concealing the alarm that the sight caused him, he told his partner that he wished to go outside for a little. She did her utmost to induce him not to go, and only when he proposed to let her hold an end of his plaid while he was without did she give a reluctant consent. Outside he pinned the free end of his plaid to the turf wall of the hut, and fled for his life. When his flight was discovered, his partner started in pursuit.

Her companions spurred her on, calling; ”Cha bu tu do mhathair air t’ aois. A Stiana chaoil, nach beir thu air!” (“You are not your mother at your age. Slender Christina, can’t you catch him!”)

Before she could overtake the fugitive, he found refuge in a horse fold at Fasa-grianach. Once he got in alongside of the horses she was powerless to harm him. When daylight came he gave the alarm, and a party of friends and neighbours went to the shieling, and found only the lifeless remains of the other hunters. The creatures with whom they had associated had sucked the blood from their bodies.


Some notes, also from the above:

The story is told with some or other of the following differences. The number of the men was three. They were on their way home over the Dirrie Mor to Lochbroom. They sought shelter in the hut from a storm. One of the dancers or the musician chanced to lower his glance, and saw that the women had hoofs. The musician stopped the music in his alarm, and his companions thereupon fell lifeless corpses. He started up to flee for his life. The woman at his side laid hold of his plaid to detain him. He threw off the plaid and fled. Her response to the incitement of her companions is “Mise ‘s mo dhubhach, mise ‘s mo dhubhach” “I and my dubhach, I and my dubhach!”

In a “Guide to Ullapool and Lochcarron,” published a few years ago, the name of the shieling is given as Airigh mo Dhubhach, and is derived from the wail of the mothers of the dead men “airigh mo dhubhach” ‘shieling of my sorrow’ but the name, as we have heard it, is Airigh nan Guthach. The word dubhach, so far as could be ascertained, is obsolete, and its meaning unknown. The reference, however, is evidently to the blood sucked from the victims by the hags, and the term is doubtless to be compared with dùbhaith, a pudding, and duthatch, great gut, anus, sausage.


"I have lost my sausage, and you have eaten your sausage!"
Uttered by Taranaich at 18:00