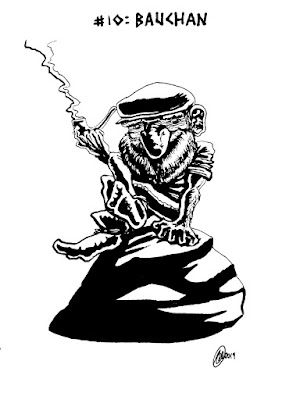 I have given these specimens of a particular class of tales which are common enough, as they came to me, because they seem to be fair illustrations of the popular creed as to spirits; and to show that the so-called spirits are generally very near mortal men. My belief is, that bocan, bodach, fuath, and all their tribe, were once savages, dressed in skins, and that gruagach was a half-tamed savage banging about the houses, with his long hair and skin clothing; that these have gradually acquired the attributes of divinities, river gods, or forest nymphs, or that they have been condemned as pagan superstitions, and degraded into demons; and I know that they are now remembered, and still somewhat dreaded, in their last character. The tales told of them partake of the natural and supernatural, and bring fiction nearer to fact than any class of tales current in the Highlands, unless it be the fairy stories of which a few are given under number 28, etc.
- John Campbell, Popular tales of the West Highlands

As an admirer of the great Arthur Rackham and modern master Brian Froud, I wanted to pay tribute in one of the (slightly) less terrifying beasties of Scottish folklore, the Bauchan.

Here's a tale of the Bauchan chronicled by John Campbell:


In the neighbourhood of Loch Traig, in Lochaber, Callum Mor MacIntosh held a little farm. There were rumours of his having intercourse with a mysterious personage called a bauchan, but of his first acquaintance with him there are no authentic accounts. One thing, however, is certain, that on some occasions he was supernaturally aided by this bauchan, while at others, having in some way excited his displeasure, Callum was opposed in all his schemes, and on several occasions they came the length of fighting hand to hand, Callum never suffering much injury. On one occasion, as Callum was returning from Fort-William market, he met his friend the bauchan within a short distance of his own house, and one of these contests took place, during which Callum lost his pocket-handkerchief, which, having been blessed and presented to him by the priest, was possessed of a peculiar charm. The fight being ended, Callum hurried home; but, to his dismay, found that he had lost his charmed handkerchief, for which he and his wife in vain sought.


Callum felt certain he had to thank the bauchan for this mishap, and hurried back to the scene of action. The first object that met his view was the bauchan, busily engaged in rubbing a flat stone with the identical handkerchief. On seeing Callum, he called out, "Ah you are back; it is well for you, for if I had rubbed a hole into this before your return you were a dead man. No doctor on earth or power could save you; but you shall never have this handkerchief till you have won it in a fair fight." "Done," said Callum, and at it they went again, and Callum recovered his handkerchief. Peats were almost unknown at that time, and Callum, when the weather grew cold, took his axe, and felled a large birch tree in the neighbouring forest, the branches supplied wood for the fire for several days, and Callum did not trouble himself to lay in a store nearer hand-when, lo! a snow storm came on, and blocked up the country, so that he was cut off from his supply. There was no means of access to the tree; and careful as Callum's wife was, the last branch was almost consumed, and the fire burnt low.

Up started Callum with an exclamation, "Oh! wife, would that we had the tree I felled in the forest! it would keep us warm this night." Hardly had he spoken when the house was shaken and the door rattled; a heavy weight had fallen near the door. Callum rushed to see what the cause was, and there was the wished-for tree, with the Bauchan grinning at him - "S ma am Bauchan fathast, ged a sgain an Sagart" - ("the Bauchan is still kind, though the Priest should burst") - said the wife. On another occasion it happened that Callum left the farm he was in and went to one adjoining which he had taken carrying with him his wife and all his furniture. In the nighttime Callum turned to his wife and said, "Well, it is well we have all with us; only one thing have we forgotten, the hogshead in which the hides are being barked; that we have forgotten" "No matter for that," said the wife; "there is no one to occupy the place yet a while, and we have time to get it home safe enough;" and so the matter rested; but on going round the end of the house next morning, what did Callum see but his own identical hogshead, hides and all. It had been transported the distance of five miles of most rugged, rocky district. None but a goat could have crossed the place, and in the time it would have bothered one to do it, but the Bauchan managed it, and saved Callum a most troublesome journey. If you will go and take a look at it--the spot is there yet--and I would like to see how soon you would manage it, let alone the hogshead.

Poor Callum, however, was obliged, with many of his neighhours, to leave Lochaber; indeed, he was amongst the first embarking at Arisaig for New York. The passage was a tedious one, but it ended at last, and without any particular adventures but on arriving they had to perform a quarantine of many days. On getting pratique, Callum was in the first boat which landed, and happened to have stowed himself in the bows of the boat, and when she grounded, was the first man to jump on shore. Directly his feet touched the ground, who should meet him in the shape of a goat but the Bauchan, "Ha, ha Callum, ha mi sho air thoseach orst" - ("Ha, Malcolm, I am here before thee"). Here ends our story; but rumour says that Callum was the better of the Bauchan's help in clearing the lands of his new settlement, and that, till he was fairly in the way of prosperity, the Bauchan abstained from teasing and provoking poor Callum.