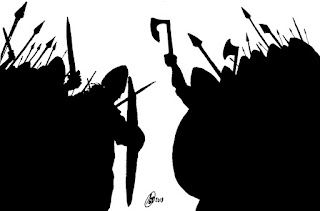 A man went to Catraeth with the day–
He gulped mead at midnight feasts.
Wretched, a lamentation for his fellows,
Was his attack, ireful killer.
There rushed to Catraeth
no great one so generous,
in his purpose [?]
There was none who more completely
From the fortress of Eidyn,
Scattered the enemy.
Tudfwlch Hir from his land and his villages,
Slew Saxons each seven-day,
Long will his valour endure,
And his memory among his fair company.
When Tudflwch was there, his people’s pillar,
Bloody was the place of spears, son of Cilydd.
A man went to Catraeth with the dawn,
About him a fort, a fence of shields.
Harshly they attacked, gathered booty,
Loud like thunder the noise of the shields.
A proud man, a wise man, a strong man,
He fought and pierced with spears,
Above the blood, he slew with swords.
In the strife, with hard weapons on heads.
In the court the warrior was humble,
Before Erthgi great armies would groan.

He pierced three hundred, most bold,
He cut down the centre and wing.
He was worthy before the noblest host,
He gave from his herd horses in winter.
He fed black ravens on the wall
Of the fortress, although he was not Arthur.
Among those powerful in feats [?]
In the front rank, a pallisade, Gwawrddur.
- Aneurin, Y Gododdin (translation by Siân Echard)

Long after the Legions left, the islands faced a new future free from the influence and order of Rome. Many new kingdoms came into being, while others reawakened old memories.

The Brythonic peoples of the lands between the two great Roman Walls formed a common area known as the Hen Oggled, the "Old North," whose roots can be seen today: Aeron in Ayr, Manaw in Clackmannan, Ystrad Clud in Strathclyde, Lleuddiniawn in Lothian. One of these kingdoms, Gododdin, was the home of a great bard called Aneurin. One of his poems, Y Gododdin, is both the oldest known work written in the Welsh language, and also the oldest surviving example of poetry written in Scotland.
Uttered by Taranaich at 21:17