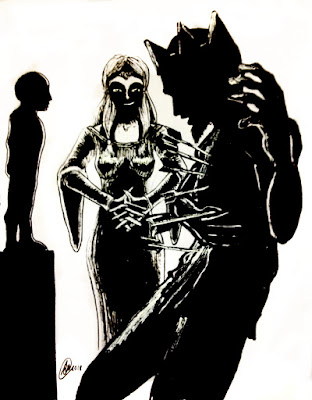 The principal of these were Constantine the Bald, son of King Culen, and Gryme, son of Kenneth, son of King Duff; and, plotting unceasingly the death of the king and his son, they at length found accomplices for the perpetration of such a crime. The daughter of Cruchne, Earl of Angus, who was named Finele, consented unto their deeds and design, her only son having formerly been ordered to be put to death by the king at Dunsynane, whether by the severity of the law, or for what he had done, or in some other way, I know not.

This wily woman, therefore, ardently longing for the king's death, caused to be made, in an out-of-the-way little cottage, a kind of trap, such as had never before been seen. For the trap had, attached to it on all sides, crossbows always kept bent by their several strings, and fitted with very sharp arrows; and in the middle thereof stood a statue, fashioned like a boy, and cunningly attached to the cross-bows; so that if any one were to touch it, and move it ever so little, the bowstrings of the crossbows would suddenly give way, and the arrows would straightway be shot forth, and pierce him through.

Having thus completed the preparations for perpetrating the crime, the wretched woman, always presenting a cheerful countenance to the king, at length beguiled him by flattery and treacherous words. The king went forth one day, with a few companions, into the woods, at no great distance from his own abode, to hunt; and while pursuing beasts hither and thither with his dogs, as he hunted, he happened by chance to put up hard by the town of Fettercairn, where the traitress lived. She saw him; and, falling on her knees, she besought him with great importunity to come into her house -

"otherwise," said she, "I shall, without fail, think myself mistrusted by your Majesty's Grace. But God knows - and thou, my king, shalt soon know - that, although the tattling of the spiteful may repeat many a lie about me, I have always been faithful to thee - and shall be, as long as I live. For, what thou not long ago didst to my most wretched son, I know right well, was justly done, and not without cause;"

and tripping up to the king, she whispered in his ear, saying: -

"When thou be come with me, I will explain to thee, my lord, who are the accomplices of that accursed son of mine, and the manner of their treachery. For they hoped to get me to join them in their conspiracy to deceive thee; but I straightway refused to countenance their heinous treachery Nevertheless, they forced me to lay my hand on the Gospel and swear never to betray their secret; but, though I promised them this on my oath, still I should be most false and traitorous towards thee, my lord king - to whom, above all others, steadfast and loyal fealty is due - were I to conceal the danger to thy person. For who knows not that no sword covenant holds good against the safety of the king's majesty.

Thus that crafty woman cunningly misled the king's mind, and drew him, alas! too ready of belief, into the house with her, everything speeding her design. Why say more? Why dwell on so sad a tale? After the king had alighted from horseback, she took his hand, and quickly led him, alone, to the house where the trap was concealed. After she had shut the door behind them, as if with the view of revealing the secrets of the traitors, as she had promised, she showed him the statue, which was the lever of the whole trap. He naturally asked what that statue had to do with him; whereupon she answered, smiling

- "If the top of the head of this statue, which thou seest, my lord king, be touched and moved, a marvellous and pleasant jest comes of it."

So, unconscious of hidden treachery, he gently, with his hand, drew towards him the head of the machine, thus letting go the levers and handles of the crossbows; and immediately he was shot through by arrows sped from all sides, and fell without uttering another word. The traitress then went hurriedly out by the back-door, and hid herself in the shades of the forest for the time; but, a little after, she safely reached her abettors. The king's companions, however, after having long awaited his return from the house, wondered why he delayed there. At last, having stood before the gate, and knocked persistently at the door, and hearing nothing, they furiously broke it open; and when they found that he had been murdered, they raised a great outcry, and ran about in all directions, looking for the guilty woman - but in vain: they found her not; and, not knowing what to do, they consumed the town with fire, and reduced it to ashes. Then, taking with them the king's blood-stained body, they shortly afterwards buried it with his fathers in lona, as was the custom with the kings.

- John of Fordun, Chronicles of the Scottish Nation

The death of Kenneth II of Scotland is shrouded in mystery, with little compelling contemporary evidence. Lady Fenella - or Finella/Finele, depending on the source - is even more mysterious, with some suggesting she was even fictional. While John leaves Fenella's fate unclear, the locality of Den Finella in Kincardineshire is alleged to be the location of her death: chased by the king's men, she leapt from the cliffs into the sea.


Finella is one of many Scottish historical and folkloric figures that featured in Disney's groundbreaking and fascinating series Gargoyles - though, as with many of these individuals, her story is rather different from established history - voiced by none other than Sheena Easton.
Uttered by Taranaich at 22:13