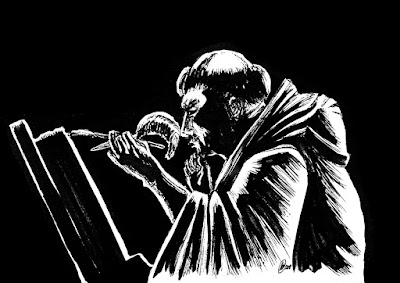 WHAT we are about to relate concerning the plague, which in our own time twice visited the greater part of the world, deserves, I think, to be reckoned among not the least of the miracles of St. Columba. For, not to mention the other and greater countries of Europe, including Italy, the Roman States, and the Cisalpine provinces of Gaul, with the States of Spain also, which lie beyond the Pyrenees, these islands of the sea, Scotia (Ireland) and Britain, have twice been ravaged by a dreadful pestilence throughout their whole extent, except among the two tribes, the Picts and Scots of Britain, who are separated from each other by the Dorsal mountains of Britain. And although neither of these nations was free from those grievous crimes which generally provoke the anger of the eternal Judge, yet both have been hitherto patiently borne with and mercifully spared. Now, to what other person can this favour granted them by God be attributed unless to St. Columba, whose monasteries lie within the territories of both these people, and have been regarded by both with the greatest respect up to the present time? But what I am now to say cannot, I think, be heard without a sigh, that there are many very stupid people in both countries who, in their ignorance that they owe their exemption from the plague to the prayers of the saint, ungratefully and wickedly abuse the patience and the goodness of God. But I often return my most grateful thanks to God for having, through the intercession of our holy patron, preserved me and those in our islands from the ravages of the pestilence; and that in Saxonia also, when I went to visit my friend King Aldfrid, where the plague was raging and laying waste many of his villages, yet both in its first attack, immediately after the war of Ecfridus, and in its second, two years subsequently, the Lord mercifully saved me from danger, though I was living and moving about in the very midst of the plague. The Divine mercy was also extended to my companions, not one of whom died of the plague, or was attacked with any other disease.
- The Life of Columba, CHAPTER XLVII, Concerning the Plague.


Iona was one of the most important places in Early Medieval Europe. The march of the Roman Empire and the vacuum of its absence meant that centuries of knowledge, chronicles, and histories were lost. In addition to being an essential destination for pilgrimage, Iona became a foundation for literature, philosophy, and art throughout the "Dark Ages."

The appointment of Adomnán as Abbot in 670 AD led to his hagiography of Columba, and started Iona on a path which would lead to the Book of Kells - which is to Irish history as Y Gododdin is to Welsh - another example of the global influence the people of what would become Scotland would make.
Uttered by Taranaich at 22:37