HistoScotInktoberFest, Day 7: Óengus mac Fergusa, Mightiest King of the Picts, and the Saltire in the Sky, ca 761 AD 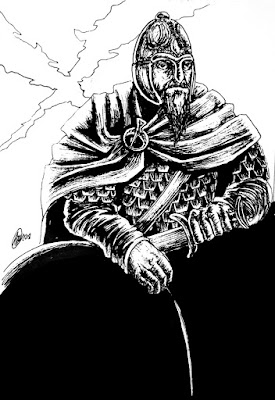 hilly Alba with its strong chiefs;
he brought battle to palisaded towns,

with feet, with hands, with broad shields
- The Book of Leinster

There are two pieces of Scottish history in here. The first is Óengus mac Fergusa, one of the greatest kings of the Picts: he fought the other kingdoms of what would become Scotland and defeated them all. He captured and drowned the King of Athfhotla, becoming overlord of the southern and northern Picts; he beheaded the king of Dál Riada as Dunadd roared in flames; he battles and defeats the great Brythonic kingdom of Alt Clut. He was the first warrior-king to proclaim himself King of the Scots and Picts - though, obviously, not the last.

The second is the saltire in the clouds. The story of Scotland's flag - that a Scottish army beheld the Cross of St. Andrew in the sky before a battle against the Angles, a possible omen for their victory - is traditionally associated with Óengus' successor, Óengus II, and the legendary Angle king Æthelstan, and dates it to 832 AD. The problem with this date is that Æthelstan was not born until much later. However, The Scotichronicon suggests another Pictish King, one "Unust," and the Picts battle the Northumbrians rather than the Angles. Not only are the Northumbrians more suitable from a political and geographical point of view, "Unust" is not a million miles away from Onuist, the Pictish name of Óengus - and given the Son of Fergus' military achievements, it seems entirely possible that at least the tradition could date from the last year of his reign at the latest.

Most compelling of all, Óengus is generally credited with establishing a monastery to St. Andrew at Cennrígmonaid, modern St. Andrews: even if the story is ultimately folklore, it could be a thematic embellishment on the First King of the Picts & Scots' devotion to the apostle who would become the patron of all Scotland.
Uttered by Taranaich at 23:26