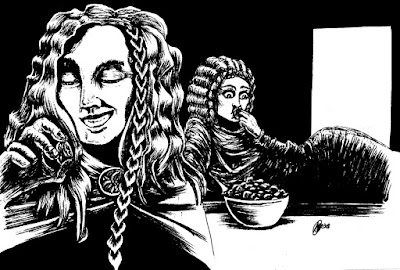 In this connexion, a very witty remark is reported to have been made by the wife of Argentocoxus, a Caledonian, to Julia Augusta. When the empress was jesting with her, after the treaty, about the free intercourse of her sex with men in Britain, she replied: "We fulfil the demands of nature in a much better way than do you Roman women; for we consort openly with the best men, whereas you let yourselves be debauched in secret by the vilest." Such was the retort of the British woman.
- Cassius Dio, Epitome of Book LXXVII, Roman History

Just over a hundred years after Agricola's victory at Mons Graupius, the Caledonians were giving Rome trouble again. Emperor Septimius Severus seized the laurels in 193 AD - the infamous Year of the Five Emperors. Even after defeating his four rivals in quick succession, he was not content to rule his empire in peace. He invaded the eastern Parthian Empire and pushed Roman borders to the shores of the Tigris River; he greatly increased troops and provisions in Arabia; he even braved the fierce Garamantes tribe and sacked their capital. Severus expanded the borders of the Empire to the east and to the south.

In 208 AD, Severus sailed to Britannia - for there was a border he aimed to push north.

Severus' campaign was long, cruel, and merciless, with a loss of Roman life that would appal emperors of another era:

Severus, accordingly, desiring to subjugate the whole of it, invaded Caledonia. But as he advanced through the country he experienced countless hardships in cutting down the forests, levelling the heights, filling up the swamps, and bridging the rivers; 2 but he fought no battle and beheld no enemy in battle array. The enemy purposely put sheep  and cattle in front of the soldiers for them to seize, in order that they might be lured on still further until they were worn out; for in fact the water caused great suffering to the Romans, and when they became scattered, they would be attacked. Then, unable to walk, they would be slain by their own men, in order to avoid capture, so that a full fifty thousand died.
- Cassius Dio, Epitome of Book LXXVII, Roman History

It is around this time that the first woman of Scotland (rather, Caledonia) to be named in the historical record is mentioned, alas unnamed. As with Calgacus, it is possible that Mrs. Argentocoxos was a fictional cipher for the author to critique Roman society through a barbarian lens: that said, as Argentocoxos is a genuine Celtic name (meaning "Silver Leg," possibly a reference to greaves), and what is known of Celtic women, it is not outside the bounds of imagination for Argentocoxos and Severus to have their wives accompany them to diplomatic talks.
Uttered by Taranaich at 22:12