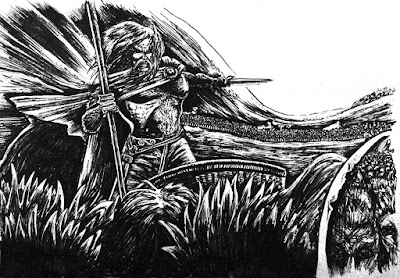 Whenever I consider the origin of this war and the necessities of our position, I have a sure confidence that this day, and this union of yours, will be the beginning of freedom to the whole of Britain. To all of us slavery is a thing unknown; there are no lands beyond us, and even the sea is not safe, menaced as we are by a Roman fleet. And thus in war and battle, in which the brave find glory, even the coward will find safety. Former contests, in which, with varying fortune, the Romans were resisted, still left in us a last hope of succour, inasmuch as being the most renowned nation of Britain, dwelling in the very heart of the country, and out of sight of the shores of the conquered, we could keep even our eyes unpolluted by the contagion of slavery. To us who dwell on the uttermost confines of the earth and of freedom, this remote sanctuary of Britain’s glory has up to this time been a defence. Now, however, the furthest limits of Britain are thrown open, and the unknown always passes for the marvellous. But there are no tribes beyond us, nothing indeed but waves and rocks, and the yet more terrible Romans, from whose oppression escape is vainly sought by obedience and submission. Robbers of the world, having by their universal plunder exhausted the land, they rifle the deep. If the enemy be rich, they are rapacious; if he be poor, they lust for dominion; neither the east nor the west has been able to satisfy them. Alone among men they covet with equal eagerness poverty and riches. To robbery, slaughter, plunder, they give the lying name of empire; they make a solitude and call it peace.
– Tacitus, Agricola

In the 8th decade of the Gregorian Calendar, the Roman Empire was approaching its greatest extent. The Sons of Romulus and Remus made the Mediterranean their lake. They had subdued the nations of Gaul, Iberia, Illyria, Mauretania, and Britannia. They toppled the heirs of Alexander’s empire. They crushed Carthage, the only city which could truly challenge the might of Rome, and razed it to the ground.

It seemed there would be no end to the empire – no limits. But after centuries of dominance, it seemed even Mars’ favoured could not conquer forever. They could not break the Parthians in the east; the barbarians north of the Rhine proved indomitable; the sands of the Sahara stopped even the legions. And north of their newest conquest, Britannia, was Caledonia.


The Romans tried in vain to conquer the wild Caledonii: of the 52,000 troops stationed in Britannia, no less than 28,000 of them were stationed in the border country north of Hadrian’s Wall, south of the Antonine. Dozens of forts, towers and camps stretched from the firths of the Clyde to the Forth, reaching north along the East Coast to Cawdor. Agricola took some land, and the Roman historians considered it all but victory. But the Caledonii were not to be tamed: even suffering a cataclysmic defeat of Mons Graupius, Caledonia would not fall to Rome. They raided, they skirmished, they sabotaged and destroyed, wrecking any chance of Rome gaining a footing. After twenty fruitless years, the Romans withdrew south of Hadrian’s Wall. A century after Agricola, Emperor Septimius Severus took 40,000 soldiers north once again in an attempt to finally take Caledonia – but while the brutal campaign sapped the Caledonians’ ability to raid the Roman Britons, neither Severus nor his son Caracalla succeeded, and Hadrian’s Wall became the final border. Caledonia was beyond the northernmost limit of Roman civilization.

Not all Romans shared a desire for conquest and domination. Tacitus attributed the above words to Calgacus, a possibly-invented leader of the Caledonii, which serves as a powerful indictment of the nature of empire which resonates to this day. That final phrase, “they make a solitude and call it peace,” is variously translated as wilderness, or desert. The 1820 Rising, led by the socialist revolutionary James Wilson, took it as a rallying cry for change – “Scotland Free or a Desert” emblazoned their flag. Wilson, along with other Scottish revolutionaries like John MacLean and Thomas Muir of Huntershill, were suppressed, charged with sedition for daring to challenge the established order, just as Calgacus and the Caledonians were trounced at Mons Graupius. But just as at Mons Graupius, even the most grievous of defeats could not crush the fire that burned in their hearts.
Uttered by Taranaich at 21:58