HistoScotInktoberFest, Day 8: Vikings at the Rock of the Clyde, 870 AD 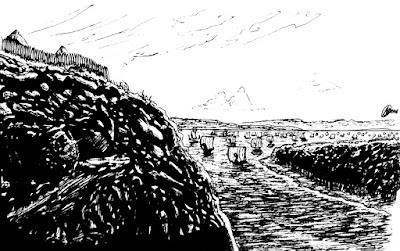 While the Roman Invasion left an indelible mark on these isles, it was far from the last great assault from overseas: four centuries after the last Eagle crossed the channel, a new menace emerged - the Norsemen.

The very end of the 8th Century is generally considered the beginning of the Viking Age here. While many Norse folk settled peacefully, hungry-eyed kings brought swords rather than ploughshares to the coast. One of these was Ivar the Boneless, a great warrior-king who was one of the leaders of the Great Heathen Army which conquered much of what is now England. Ivar joined forces the Olav the White, another robber king who invaded Ireland & ruled Dublin, in an assault on one of the last strongholds of the ancient Britons - Alt Clut, the Rock of the Clyde.

The Britons of Strathclyde, descendants of the fierce Damnonii who harried Rome, held out for four months of merciless siege. Ivar marched an army all the way from York, while Olaf sent forth a great fleet of longboats numbering in their hundreds. By the end of the siege, no less than two hundred boats were required to carry away their plunder.

Despite this devastating attack, the Kingdom of the Clyde survived and flourished - indeed, it retained its independence all the way to the middle of the 11th Century.
Uttered by Taranaich at 22:47