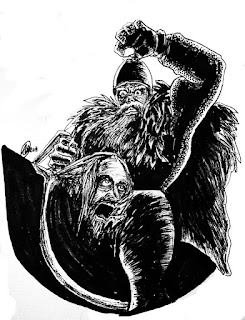 Earl Sigurd made himself a mighty chief;  he joined his fellowship with Thorstein the red, son of Olaf the white and Aud the deep-minded, and they won all Caithness and much else of Scotland, Moray and Ross;  there he caused to be built a burg southward of Moray.  These two agreed between themselves to meet, Sigurd and Melbricta toothy the Scot-earl, that they should meet and settle their quarrel at a given place, each with forty men.  And when the day named came, Sigurd thought to himself that the Scots were faithless.  He made them mount eighty men on forty horses;  and when Melbricta got to see them, he said to his men:

“Now are we cheated by Sigurd, for I see two feet of a man on each horse’s side, and the men must be twice as many again as the steeds that bear them.  Let us now harden our hearts, and let us see that each has a man for himself ere we die;”  and they got ready after that.  And when Sigurd saw their plan, he said to his men:

“Now half of our force shall get off horseback and come on them in flank when the battle is joined;  but we will ride at them as hard as we can, and break in sunder their array.”

And so they met and there was a hard battle, and not long ere Melbricta fell and his followers, and Sigurd caused the heads to be fastened to his horses’ cruppers as a glory for himself.  And then they rode home, and boasted of their victory.  And when they were come on the way, then Sigurd wished to spur the horse with his foot, and he struck his calf against the tooth which stuck out of Melbricta’s head and grazed it;  and in that wound sprung up pain and swelling, and that led him to his death.  And Sigurd the mighty is buried under a “how” at Ekkjalsbakka.


Sigurd "the Mighty" Eysteinsson was Earl of Orkney. In 892 AD, he met Máel Brigte of Moray in battle: he slew the Pict, and to add insult to injury, beheaded him, and tied his head to his saddle as a gruesome trophy.

On the ride home, the head's teeth started to graze against Sigurd's thigh. After hours of this, a wound emerged, and Sigurd died of infection.

Máel Brigte thus joins the likes of El Cid and Arrichion of Phigalia in managing to achieve victory over his foe from beyond the grave.
Uttered by Taranaich at 23:57