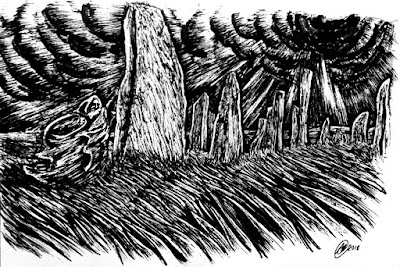 After the wildly productive PrehiScotInktoberFest last year, another subject dear to my heart will be the focus for this year: Scottish History. From famous moments to little-known anecdotes, tales of ancient Caledonia to modern Scotland, today will be the first of 31 sketches from Scotland's past.

While Scotland's civilisations were well-attested in archaeology, there was precious little in the form of written records - at least, any we can currently translate. The earliest account of what would become Scotland could be found in the now lost-book On The Ocean by Pytheas of Massalia. Pytheas, a Greek geographer, embarked on a grand voyage to the farthest reaches of the Greek World around 320 BC - to the frozen northlands of Thule, Hyperborea, and more.

As the book is now lost to history, we have to rely on quotations and criticisms of his contemporaries and successors - many of whom considered his adventures fabulous, if not outright fraudulent. But from the little we do know, we can trace Pytheas' voyage, and find that he provides a highly accurate measurement of the British Isles. One particularly interesting conjecture is that Pytheas visited the Callanais Stones: these megaliths were ancient even by Pytheas' time, old ruins to the contemporary people of Berrice - which could have been Pytheas' name for Lewis.
Uttered by Taranaich at 18:59