After the monumental success of the Scottish Five's cross-continental expedition, it would only be a matter of months before it was repeated.  12, to be exact.  Bill "Indy" Cavalier has posted an update on Howard Days 2011.  Excitement!

Lest we forget another very important anniversary: the first anniversary of the Scottish Invasion of Cross Plains!  (I kid, I kid, ho ho ho)

Keeping that history angle in mind, we’ve chosen two Legendary REH publishers to be our Co-Guests of Honor this year: Damon Sasser and Dennis McHaney. Those of you familiar with Howard Fandom will of course recognize Damon and Dennis and we’re happy to have them at Howard Days to talk and be available to their legions of fans. Damon is the publisher of REH: Two-Gun Raconteur (“The definitive Howard Fanzine”) and runs the REH: TGR blog, and Dennis’ The Howard Review is his ultimate claim to fame (among others) in a nearly 40 year career as as a REH publisher. Dennis also runs the biggest REH message board at rehinnercircle.com.

I had the pleasure of meeting Dennis at Howard Days, though it was not without some trepidation: he'd been rather critical of The Cimmerian's post-Leo Grin run (not that the Grin regime was exempt from his criticisms), but I was so awed by the man's work for Howardom that I felt compelled to introduce myself all the same.  He was a thoroughly pleasant and erudite gentleman, and I'm very glad to have talked with him.  I didn't, unfortunately, spend much time talking to Damon Sasser: this will undoubtedly be rectified this year.

There’s lots more info to come here on the REHupa site, plus there’ll be info at the REH Foundation site, Damon’s TGR blog and Conan.com. We’re in the process of setting up the scheduling for Howard Days, plus there’ll be some truly fantastic events happening if everything falls into place this year. All of the familiar fan-friendly events are still happening: House & Town tours, Banquet & Silent Auction, Swap Meet, Postal Cancellation, Saturday BBQ plus a plethora of interesting panels & hopefully some special events.

Ok, if that’s not enough enticement, keep your radio dial tuned here for updates and more detailed information. In the meantime, shouldn’t you be making your plans to get to Howard Days this year? We’ll be looking for you! Y’all come!

Woohoo!  I have the hotel booked, tickets bought, and working on how best to keep cool.  I'm thinking a Bedouin suit - thawb, sirwal, kafiya - but combined with my beard, I'd probably give the locals a bit of the heeby-jeebies.  I could always pretend I'm dressed up as Kirby O'Donnell.  Or T.E. Lawrence after a few years not shaving. 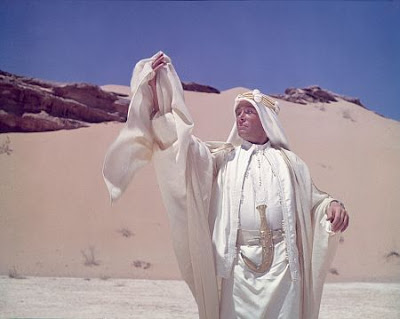