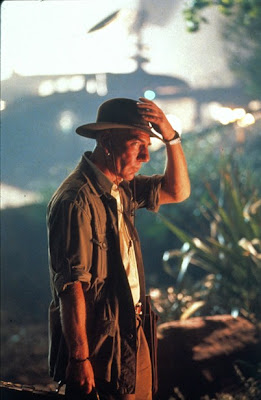 Pete Postlethwaite's one of those actors whom you never forget.  No doubt his fascinating facial features have something to do with it, but that should by no means diminish his considerable acting talent.  The man was very good at what he did, and what I loved most about him was that he always resisted the temptation to "steal the show," as it were, whenever he was inevitably called upon to lend some Shakespearean gravitas to a supporting role.  Whenever he was the focus, however - protagonist, antagonist, mentor, student, hero, villain - he was riveting.

While I'm sure most would point to his roles in Brassed Off, The Usual Suspects, In the Name of the Father, Romeo + Juliet and The Shipping News, deservedly so, I'm going to point to two others.

The first was Rat, a rather fascinating little fantasy that saw Pete turning into a rat.  This is one of those very British comedies that manages to have great tenderness and sincerity mixed in with somewhat incongruous harshness and severity.  It's a wonderful little fable that's like a cross between Roald Dahl and Jean-Pierre Jeunet.  I loved it, and Pete's performance as the titular rat tied it all together.

The second was Roland Tembo in The Lost World: Jurassic Park.  That was a problematic film for many reasons, but it had its moments - and they all involved Tembo.  Here was one of the most understated, yet, commanding, Great White Hunters I've seen in film: you know this man's in charge, but nonetheless, there's a strange, haunted look in his eyes.  A man who's spent his life in the company of death.

Plus he had all the best lines:

Remember that chap about twenty years ago? I forget his name. Climbed Everest without any oxygen, came down nearly dead. When they asked him, they said why did you go up there to die? He said I didn't, I went up there to live.

A true hunter doesn't mind if the animal wins. There weren't enough escapes from you and me, Ajay. We were like a firing squad, don't you think?

Requiescat in Pace, Pete.
Uttered by Taranaich at 14:51