Treading Water: Narnia at the Movies 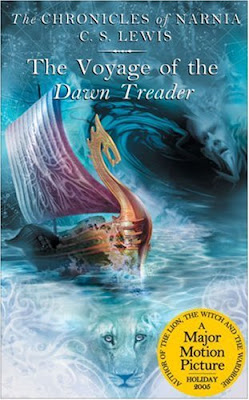 There are few things I hate more in life than the Major Motion Picture sticker.  You might as well have the sticker say "why bother reading when you could watch it on a big screen?"

This SF-and-F history month, I wanted to talk about some of the other greats of SF-and-F.  I'm just back from Harry Potter and the Deathly Hallows (with the kids, you see, yeah, the kids!), and among the trailers, which are part of cinema habitual routine for me, I noticed that Walden Media really really seem to have gotten The Chronicles of Narnia: The Voyage of the Dawn Treader off the ground.

Considering I had to sit through The Lion, The Witch and the Wardrobe and Prince Caspian to get to the one Narnia book I truly enjoyed, I'm excited - though given what's come before, about as nervous as one can expect.


I read The Chronicles of Narnia as a lad, and enjoyed them fairly.  The first two in the series were fairly fun, though I wasn't really that enamoured with them.  I think the main problem was that I was young, but I could tell this was a book for young'uns: the language, diction, dialogue and whatnot.  I was a precocious little scamp raised on Arthur Conan Doyle and Edgar Rice Burroughs, so I could tell the difference between the two styles.  Thus, the first two books reminded me more of Carrie's War, another book that was aimed towards children in an adult and unpatronizing manner, but nonetheless one felt that the author was choosing their words extremely carefully, with a sort of distance between author and reader. I'm sure some might disagree about Narnia not being patronising, but I've read my fair share of children's books that read like they were aimed at illiterates.  Also, Father Christmas appearing in TLTWATW was such an immersion-breaker for me, even if he was a kickass Santa (how come I never got deadly weapons for Christmas?), that the rest of the book was a let-down.  Even the big battle at the end.

Then I read The Voyage of the Dawn Treader, and everything changed.  Now we had a story centered around a sea voyage, modelled after the great Celtic cycles or Norse Sagas, or even The Odyssey. Daring the treacherous high seas, visiting unknown and mysterious lands, all far from Narnia and the lands we've known, in a search to find seven lost souls. Plus the toughest mouse in fantasy fiction, slavers, a two-week storm, a battle with a sea serpent, and a freakin' dragon.  It almost seemed that Lewis was finally hitting his stride, merging the sense of wonder with subtle character nuances, mixing his Christian symbolism with Celtic, Norse and Greek allusions.  That's more like it!

So, the trailer had me alternately enthused and perplexed.  It looks great, of course.  I can already tell I'm going to love Eustace, the Dawn Treader looks like a cross between a caravel and a longship (not quite enough of the latter, and it's a touch on the flamboyant side, but I think I could grow to dig it), the drawn-into-Narnia scene looks nice, Ramandu's Daughter looks unearthily beautiful, and the Dark Isle mist looks suitably haunting.  If nothing else, the visuals look as spectacular as the previous films, if not quite as strong as, say, the Lord of the Rings trilogy, and certainly not Harry Potter, which has really been impressing me on a visual standpoint since Prisoner of Azkaban.

That said, some things bothered me (what, me? Surely not!)  For instance: Eustace appears to hold off on shedding his dragon skin, where he fights the sea-serpent while in said form: this seems to seriously undercut his bravery in attacking the beast when he was a mere squidgy human.  Not to mention it presents a problem on how they're going to fit a few tons of dragon on board the ship.  There's also a bunch of nonsense about uniting the "seven swords" (what's wrong with the seven lords?) to defeat a "Great Evil" that looks like the Smoke Monster from Lost with a bad tummyache.  There are a lot more battles than I remember, further inviting unfair comparison to the Lord of the Rings trilogy.  For some reason there are now faun and minotaur crew members on the Dawn Treader, which somewhat dilutes the sense of wonder: it's difficult to be impressed by the Dufflepuds when you have a gigantic bull-beast at the helm.  Besides, how are they going to feed those guys, and how are they meant to navigate the ship's deck with their hooves, and where are they supposed to bunk? 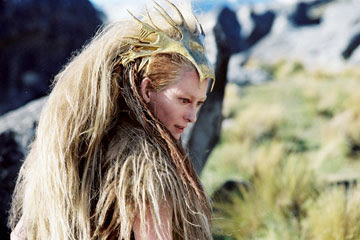 It wasn't until recently I realised that the Witch was actually wearing Aslan's mane at the First Battle of Beruna in the film adaptation.  What a wonderfully barbaric touch.

Most irritating to me, as with Prince Caspian, the dreaded White Witch is forced in for another cameo.  Guys, Tilda was wonderful, but give it a rest.  I get the impression they're trying to foreshadow her appearance in The Magician's Nephew, but there's a difference between foreshadowing and flattening, with these gratuitous cameos that would make Boba Fett blush through his helmet.

(And you know what?  THIS IS STILL CLOSER TO THE SOURCE MATERIAL THAN OTHER FILMS I COULD MENTION.  BUT I WON'T.)

I can only hope that the above elements aren't as bad as the trailer makes out, and that it's still the more discovery-oriented voyage of the book, rather than another attempt to cash in on The Lord of the Rings with heavy emphasis on battles.  If they want that, they can just wait until The Silver Chair: it has a freaking Underworld Invasion in it.  I just hope they don't make the boneheaded decision to make the Lady of the Green Kirtle into the White Witch, like some are wont to do.  Even if it takes as many liberties as Prince Caspian did - liberties which made Peter look like an incredible fool, might I add - I can always hope for a Purist's Cut.

Of course, special mention must be given to the big brouhaha this week: Liam Neeson having the unmitigated gall - nay, the blasphemy - to speak his mind about his own personal opinion.  What was this outrageous statement, you ask?

“Aslan symbolises a Christlike figure, but he also symbolises for me Mohammed, Buddha and all the great spiritual leaders and prophets over the centuries.

“That’s who Aslan stands for as well as a mentor figure for kids – that’s what he means for me.”

Now, I'd like to emphasize that Neeson says "but he also symbolises for me Mohammed, Buddha and all the great spiritual leaders and prophets over the centuries," and "that's what he means for me."  For him.  In addition to Christ.  It's a bit glib and blase, but hey, he's an actor.  A very good actor, of course, but it isn't as if he's saying "Lewis intended Aslan to be viewed as a Mohammedan figure" or anything.

But you sure wouldn't know that from the outcry that's poured out.

Walter Hooper, Lewis’s former secretary and a trustee of his estate, said that the author would have been angered by Neeson’s comments.

He said: “It is nothing whatever to do with Islam. Lewis would have simply denied that. He wrote that 'the whole Narnian story is about Christ'. Lewis could not have been clearer.” 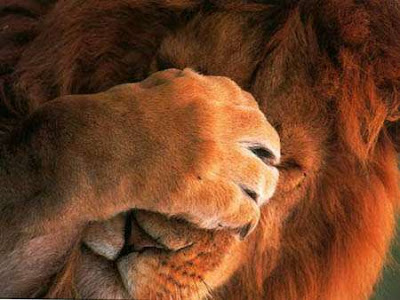 Mr Hooper, please, calm down. Once again: Neeson said Aslan was Mohammed for him.  That's what Aslan means for him.  As in, this was his personal, individual association, where he equates Aslan with all the positive and encouraging aspects of spiritual leaders. It's pretty clear Neeson isn't making any sort of statement that Lewis intended to equate Aslan with Mohammed or Buddha, or anything.  It's just, like, his opinion, man.

Not just Hooper, but the usual quarters start to get in a tizzy: Catholic kneejerkers.  Speaking as a Catholic and a Narnia reader myself, I can't see the problem with what Neeson said.  At all.  He's just speaking his opinion - a banal one, but an opinion - and he clearly notes it as such.  It's a weird opinion, I'll grant, and one I disagree with (kinda hard to square Aslan with Mohammed, simply going by the two's biography, character and background), but the guy's allowed to have one, right?

Anyway, I'll be off to see The Chronicles of Narnia: The Voyage of the Dawn Treader this week or next.  Hopefully I can grit my teeth through the additions and alterations, and enjoy the film for what it is.
Uttered by Taranaich at 14:58