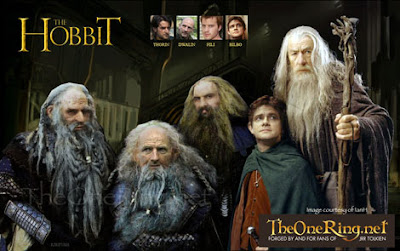 
I don't doubt the costumes, props, shots, sets, landscapes and score will be outstanding, right down to the lovingly inscribed Tengwar on the swords, the sadistic practicalities of goblin apparel, and the meticulously carved Khazad runes on the dwarves' armour.  I foresee earnest and heartfelt acting from the cast, much effort and enthusiasm from the crew, and eagerness to give due props to the man responsible for it all.  At the same time, I don't doubt Jackson's direction will be strongest with horror while faltering with the melodrama, Most of all, while I know the outline of the story will be adhered to, and most of the characters, places, events and things will make it in, they may well be radically altered from their original state.

It's a very different situation from that other upcoming literary "adaptation."  With that film, there isn't really any hope that it's going to be anything more than the main character In Name Only, and one can easily discount it as an adaptation.  But with The Hobbit, it's more complex.  This will still be the story of Bilbo Baggins joining a company of dwarves in the Quest for Erebor, he will encounter a dragon named Smaug the Golden, and a wizard called Gandalf will appear and disappear on some undisclosed business.  At the end, Bilbo is present for a massive Battle of Five Armies, and he returns home to Hobbiton enriched and vitalized by the experience.

There's just such a vast gulf of difference.  Even considering the horrible handling of Faramir, Denethor, the Ents, Theoden, and Aragorn, and the complete lack of Beregond, the Barrow-Downs, and especially the Scouring, Jackson's The Lord of the Rings is recognizably an adaptation of J. R. R. Tolkien's The Lord of the Rings. So we can argue about the changes being made and interpretations being done until the Kine of Araw come home, but until then, one can say that, for all its faults, Jackson et al really thought they were giving it their all, and were giving the world their interpretation of Tolkien's Middle-earth.

Case in point, a lot of photoshops have popped up with the actors in the roles they have been cast.  This fantastic speculative impression of Richard Armitage as Thorin is an example.  Similarly, a few photoshops of Jason Momoa turned up from various quarters, suggesting what he might look like as Conan.  This is easy to do, when you have an idea of who the character is.  Thus far, I haven't seen any photoshops of Stephen Lang as Khalar Zym.  Why is that?  Because nobody knows who the hell Khalar Zym is.  Ah well, I guess I said my piece a long time ago, and I doubt I'll be changing my mind.  Even if they get Christina Hendricks to play "Itaril."

I'm more surprised that people are acting surprised at the news that Cate Blanchett will be reprising her role as Galadriel in The Hobbit, and the very distinct possibility of Orlando Bloom reprising his role as Legolas, than I am surprised at the actual news.  Not even the fact that three of the most important actors whose characters actually do appear in The Hobbit - McKellan, Serkis and Weaving - are nowhere to be seen.

Various outlets are apparently shocked, shocked I say, at Jackson & Co making such sweeping changes to the source material, and wonders how the fandom will react.  Erm... did they watch the same movies I did?  Because there were a lot of changes made that can be laid squarely at the feet of Jackson and his cohorts: completely redoing the Siege of Barad-dur, Sauron being a floating eyeball, Lurtz, Arwen's expanded role, butchering the Entmoot, Elves at Helm's Deep, Aragorn's Magical Mystery Water Adventure, Frodo & Sam go to Osgiliath, and countless smaller additions than that. Hell, did they even read previous reports, about the spunky female elf, her hot elf boyfriend and the Master of Laketown's toady?  Not to mention Galadriel's hardly the first character in the legendarium that doesn't appear in The Hobbit to make an appearance: she joins Radagast the Brown, after all.

It was inevitable that there would be female characters in The Hobbit.  Two thirds of the writing team are female, after all.  So Galadriel isn't a shocker, and seeing her appear squares with her role in the downfall of the Necromancer, which was coincidental with the events of The Hobbit.  I wouldn't be surprised to see Arwen make an appearance either, and I've resigned to the idea of the infamous female elf making the rumour rounds being a likelihood.  I can, sadly, see the problem: unlike The Lord of the Rings, there really aren't any female characters of note.  I just wish they would keep to the characters that are there, like Galadriel, and not infect the films with their fan fiction.
Uttered by Taranaich at 05:45

Labels: Adaptations, The Lord of the Rings