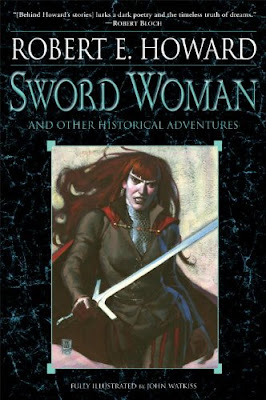 Rusty Burke has very kindly released the contents for the upcoming (boy oh boy oh boy) Sword Woman and Other Historical Adventures on the REHupa website.

A number of people have been inquiring about the contents of Sword Woman and Other Historical Adventures, due from Del Rey in January (as currently scheduled, anyway). So I thought I would try to sneak in a few minutes at the computer and give you a look at what’s included in the book:

There’s an introduction by Scott Oden, certainly one of my favorite writers of historical fiction (if you haven’t yet grabbed a copy of his Lion of Cairo, put it on your Christmas list!), and an illuminating essay by Howard Andrew Jones, Howard fan, noted authority on Harold Lamb, and himself an author of historical fiction. There’s an interesting conversation between the two of them at the Black Gate site. And of course the book includes my detailed notes on the original texts.

Howard’s historical fiction is, in my opinion, among his very best, so I hope that this book will get a wide readership.

It's an awesome collection.  Now, you might notice there are some omissions in the list, but Rusty has explained over at the REH Forums:

I sort of arbitrarily imposed a couple of limits on the selection, to keep it manageable. One was that the stories had to be anchored to some actual, recorded historical event or person, and the other was an arbitrary decision to start with "Spears of Clontarf" in 1014 AD. "Two Against Tyre" was set way too early, and not tied to any actual historical people or events. I did violate the rule in an instance or two. "Sword Woman" does not involve any actual people or events, but "Blades for France" does, so that gets Agnes in. And the same sort of thing applies to Cormac Fitzgeoffrey -- he's in because in at least one story there is some actual history. Now of course, by the same token, Solomon Kane could have fit in thanks to "The One Black Stain," "The Return of Sir Richard Grenville," etc., but he already had his own book. REH is just really hard to compartmentalize, y'know.

Can't really argue with that. There are a few other historical adventures like "Swords of the Northern Sea" and "The Isle of Pirate's Doom," but they belong more in a "Celt Collection" and "Fantasy-ish Adventure Collection" respectively.

Now, one thing I think some might express concern about is how much more material is there than Lord of Samarcand and Other Tales of the Old Orient: well, the latter doesn't include "Spears of Clontarf," "Sword Woman," "Blades for France," or "Mistress of Death," nor the poems "The Outgoing of Sigurd the Jerusalem-Farer," "The Skull in the Clouds," "A Thousand Years Ago," and "The Sign of the Sickle." However, the Bison collection does include "Two Against Tyre" and "The Shadow of the Hun."  Hopefully these latter two will make it into another Del Rey collection... like a Celtic Collection?  Eh?  How about it, guys?

Now if only they could set about restoring that awesome, achingly beautiful Watkiss cover and get rid of that... other one.  I dearly hope it'll at least be put in as an interior illustration, at the very least.
Uttered by Taranaich at 04:42