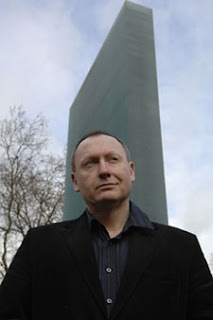 I like to imagine he's contemplating how his company is going to take over the Crown.

In his recent post, Philip Palmer gives the very silly man Edward Docx both barrels for his very silly post.  It's from The Guardian, that home of baby intellectuals, so I can't be surprised at the silliness.  How silly?  Here's an excerpt:

... in my view, we need urgently to remind ourselves of – for want of better terminology – the difference between literary and genre fiction; because, to misquote the literary essayist Isaac D'Israeli, "it seems to me a wretched national compulsion to be gratified by mediocrity when the excellent lies before us".

It appears to be of the typical tired "fantasy, science fiction and horror aren't "real" literature" stripe, and again, he brings up that odious, snivelling, miserable, worthless malapropism "literary fiction."  Few phrases infuriate me more than "literary fiction": "now a major motion picture" is pretty close, though.  Hell, by his definition, isn't literary fiction in itself a genre - and thus, genre fiction?  I'd love to see Docx bend over backwards to make allowances for the many classics which couldn't be anything but "genre fiction".  Palmer does a fantastic job destroying, disintegrating and defenestrating Docx's idiocy.

However, he has something to say about Howard.  Something both challenging, and awesome.


I admit, I know nothing of Palmer's fiction, but I like the cut of his jib.  In his precise, bombastic broadside of Docx's article, he cites Wolfe, Vance, Sturgeon, Hammett and Chandler, and thinks they should be considered among the great pantheon of American authors.  Damn straight.  He also adds King, and I can't disagree, if we're talking his short stories.  But what of Howard?

And yet - if I were to make a list of my FAVOURITE genre writers, it would include all the above, but also some others.  Would I make a case for Robert E. Howard being a major 20th century writer, deserving of a place in the canon?  Well, after a few drinks maybe, but perhaps not.  But on the other hand - he's a great writer.  Fabulous prose style. Resonant ideas. Great stories. In fact, maybe I'm just being snobbish; discuss!

This strikes me as something of a "reverse back-handed compliment": in apparently criticizing or dismissing Howard, he actually makes Howard look pretty damn awesome in the process.  Not so much "for a fat chick, you sure don't sweat much," as it is "you're hardly the skinniest babe I've ever seen, but boy, you have nice gams!"

The 'discuss' bit is what makes academic studies alive and vital; everything can be discussed, and should be.  So if you're an academic and you want to argue that Conan the Barbarian is one of the great cultural artefacts of the 20th century - then go ahead! I truly want to hear that argument.

You guys know what to do.  This isn't some idiot blogger ranting about how Conan the Barbarian (1982) "elevated" Conan above his lowly pulp origins, or some ridiculous blowhard presenting some insane new theory on Howard's life without letting little things like facts and evidence get in the way: this is a challenge to rise to the occassion.  Go over to Palmer's blog and present an argument: tell him why you think Howard deserves recognition, post links to good Howard essays and sites, or just tell him good job.  I'm not suggesting slapping on our Pictish warpaint and setting down on a warpath - far from it! - I'm suggesting we put on our finest duds as emissaries of Howardom, with the savage courtesy that is expected of us.

Too often the S.H.I.E.L.D.W.A.L.L. has mobilized for combat: this is a chance to mobilize for a parade.  Show off our colours, celebrate Our Favourite Author, and try to explain just why Howard means so much to us.  A wise man once told me that Howard fans could think of themselves as missionaries, to preach the Word of Bob to those who will listen.  Sure, plenty will close the door, muttering "damn Crom's Witnesses" under their breath.  Some nice ladies will invite us in for tea and biscuits, though it's clear they're just being polite.  But occassionally, someone will stand, arms folded, listening, waiting for us to state our case, challenging us to convince him.  Let's go for it.
Uttered by Taranaich at 01:50