Dammit, They Stole My Idea: Rare Exports and Christmas Tales of Terror 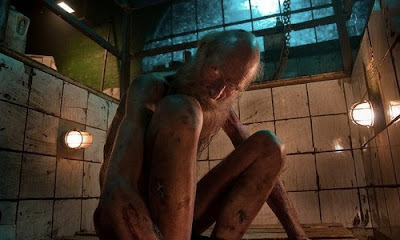 In the depths of Lapland's Korvatunturi Mountains, 486 metres deep, lies the closest guarded secret of Christmas. The time has come to dig it up...

So goes the synopsis of the Finnish film Rare Exports, a tale of terror of that time-honoured Christmas tradition of turning Santa Claus into a figure of terror.  In theory, it isn't hard to imagine why: a great bearded man who can travel to every household on the planet in a single night, commander of hordes of elves who do his bidding, someone who somehow knows every human child's behavioural patterns... Yeah, it doesn't take much to turn that into a psychological chiller.

Alright, in fairness, the idea of doing a darker tale around the sinister early legends of Santa Claus is probably one many people have had before.  Darker fairy tales are not new: indeed, fairy tales were dark from the beginning.  The idea of twee, safe, happy fairy tales is a recent and short-lived phenomenon.  That's why I have to laugh at all those authors and directors who give the pretense of making "new and imaginative takes on cosy fairytales," especially when they pale in comparison to the Stygian horrors of the timeless folk traditions.  Even the Brothers Grimm and Hans Christian Andersen.

Still, from what I can see from the trailer and elsewhere, Rare Exports seems to rely on the concept of Santa as a not-quite-human, possibly supernatural demon from the dark past of European folklore.  In other words, the Joulupukki taken to its logical conclusion.  I can't discern more than that, and since the film seems to be a Raimi-esque comedy-horror, it might not even try to explain it further than "Santa's a lot darker than you Coca-Cola drinkers thought."

Me, I was instantly reminded of the many "Little People" works inspired by Arthur Machen, particularly Howard's "The Little People."  I'd often wondered about applying such ideas not just to fairies and elves, but to other traditions like Santa Claus.  As I think you could expect, their history stretches all the way back to the Hyborian Age.  I'll get into more detail as a sort of "Christmas post," but let's just say Walking In The Air, With Burning Feet of Fire isn't the only tale of terror that can be spun from the white whiskers of Father Christmas...
Uttered by Taranaich at 16:41