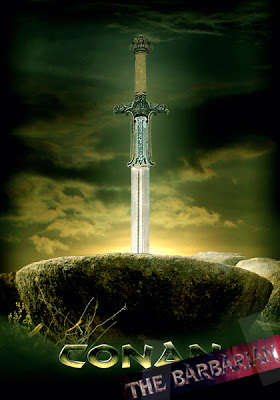 Alright, it's clear my self-inforced moratorium on Howard and Conan-related posts is going to be about as successful as the Prohibition, so I'm just going to come out and say it:

Calling the new Conan film Conan the Barbarian is a terrible idea, but they've painted themselves into a corner with it.

Reasons to go with Conan the Barbarian
Undoubtedly the brand recognition is the strongest factor. When there are at least two other notable Conans one could be talking about, it's useful to qualify exactly which Conan you're talking about, and like it or not, "Conan the Barbarian" is the most visible and recognizable of Conan's many epithets, used in pastiches, comics, games and of course film.  People might not go to see a film simply titled Conan, but Conan the Barbarian might cause a little spark of familiarity.  Of course, this recognition could also lead to those who didn't like Conan the Barbarian to give it a miss.  Double-edged sword, a bit.  I definitely know a couple of Smart Alecs that pipe up with "aww, I though this was a Detective Conan movie" or "isn't it a bit early to make the movie of the Late Night Wars, lawl?"  So who knows, maybe it is a reasonable idea.

Now if we could just stop people from calling "Conan the Barbarian" the "original" title, and - worse - that Robert E. Howard came up with it...*

Reasons not to go with Conan the Barbarian
It's going to confuse the audience.

To steal and alter a bit from my Newcomer's Guide:

Did you hear they're making a remake of Conan the Barbarian? Man, who are they going to get to play Thulsa Doom?
Thulsa Doom isn't in the film.

Huh?  But how can you have Conan the Barbarian without Thulsa Doom?
Conan managed just fine for over 50 years without him Crom dammit The new film isn't a remake: it's ostensibly a new take on Conan's origin story unrelated to the original film.  Thus, Thulsa Doom doesn't appear.

So, what, does that mean there's no Valeria, Subotai, Wizard, Thorgrim, Rexor, King Osric, Princess?
No.  None of those characters are in the film.

Not even the Mongol General, the Princess, that priest that tries to seduce Conan, and that witch who turns into a werewolf?
Sorry.

... But Conan's in the film, right?
Oh yeah, and his mother and father, but that's it, really.

But how are they going to do the Wheel of Pain, the Crypt, the Tower of the Serpent, the Mountain of Power, the Tree of Woe, the Mounds of the Dead, and the final battle without all the characters that made it work?

They're not going to do any of those things. None of those places or events are happening in the new film.

You're kidding. At least tell me they have Conan's iconic sword!
Nope.

Aw come on! Surely they're - lemme think - oh, right, surely they're using Basil Poledouris' themes?
I'm afraid I can't do that, since they aren't.

No freakin' way.  But what about all the great quotes, like the Wizard's narration, the "best in life" routine, and Conan's prayer to Crom? Are any of those in?
Do I really have to say?

... So remind me why this is a remake again?
It isn't. It's a more faithful adaptation It claims to be a new take on the same source material that's more faithful to it.

Is it?
*Derisive Snort*

But it doesn't have anything to do with Conan the Barbarian!
Welcome to our nightmare Actually, that's not strictly true: it features a muscular dude named Conan, who's a Cimmerian, who's father is a blacksmith, whose parents and home tribe are destroyed by an evil sorcerer.

But aside from the names, that bears no more in common with Conan the Barbarian than Ator or any number of the Conan ripoffs of the 1980s!

Once again, welcome to our nightmare Yeah.

But that's totally lame!
How many times am I going to say this I know.

So why is it called Conan the Barbarian?
Because brand recognition will get arses in seats.

You see the problem. It's really hard to try and court those familiar with Conan the Barbarian considering the film has little to do with the first film, and when people discover this, they're as likely to reject it as "fixing wot ain't broke" as they are to see it as an interesting new take.  "Hey guys, remember Conan the Barbarian?  Well here's a new film that contradicts nearly everything you remember from the first film, even though it has the same title, and we can't even say it's based on the original stories!"

See, Conan the Barbarian (2011) suffers a problem: there's already a popular film with that name, but aside from the name and central plot of "hero's parents are murdered and village destroyed by evil rampaging warlord who's also a sorcerer" there is really not that much in common with the two.  The love interest is different, the allies are different, the villain is different, the larger story is different, the setting is different...

If CtB'11 is indeed a remake, then it's from the same school as Tristar's Godzilla and the Day of the Dead remake: sharing little with the earlier film save the name and core idea, lacking most of the characters, events and - frequently - quality.

But of course, CtB'11 isn't a remake, it's a "reimagining."  There are two kinds of reimaginings: ones that take the characters and setting and run with it, and those that do something entirely new.  The first type usually keep the names: despite the vast change in tone and eventual storyline, the new Battlestar Galactica retains the setting, character names and many of the elements of the original series, so keeping the name makes sense.  The second type, however, usually benefits from a name change to distinguish it from earlier iterations.  An example is Batman Begins: considering (apart from Alfred, Comissioner Gordon and Batman himself) none of the characters from the previous big screen Batman continuity appear, a very different sequence of events after his origin takes place, and even things like the Batmobile are different, it would be confusing for the film to share the same name as the Tim Burton film.  Hence, Batman and Batman Begins: both origin stories for Batman with some similarities, but otherwise very different.

Conan is clearly one of the second types, despite the constant assurances that they're getting the ever-nebulous "tone" and "feel" of the Howard stories.


Oh Yeah, Wise Guy? Then what would you call the movie?
The first that springs to mind is Conan the Cimmerian. It's the character's name, one that goes all the way back to Howard; it's something Conan's often called even outside Howard; it's something that will distinguish the film from any of the other Conans; it isn't the same damn name as Conan the Barbarian.  Conan the Cimmerian would be a far superior choice, in my opinion.  An alternative in the same vein would be Conan of Cimmeria.  It isn't as if there's some dearth of epithets one could choose: Conan the Adventurer, Conan the Conqueror, Conan the Warrior, Conan the Avenger, Conan the Octagenarian etc. One of the old Gnome/Ace names like The Coming of Conan or The Sword of Conan might work too. Alternatively, I'd go poetic. Conan: Born on the Battlefield, Conan: Out of Shadowed Hills**, Conan: Land of the Darkness and the Night, something like that.

Considering this is an origin story, I suppose one could make a case for including that in the title.  Preferably not Conan: The Beginning, Conan: Origins, Conan: the Early Years or Conan: Rise of a Warrior, and definitly not the likes of Young Conan or Teen Conan.  Frankly, I'd go with just about any other title than Conan the Barbarian. That name just ties it in even further to the 1982 film, it opens up the likelihood for confusion, and it's just going to bring with it all the problems with the title in the first place. 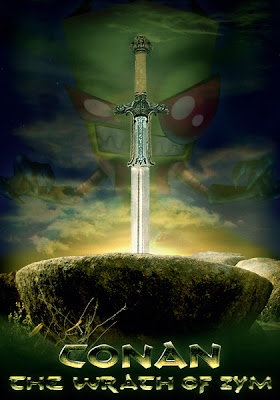 *Seriously, some people seem to think changing it "back" to its "original title" Conan the Barbarian is the best thing they could have done. One even seems to think that plain old "Conan" would cheapen the property.  Many think that Lionsgate made the change because the old title "alienated fans of the original movie" - as if leaving almost every character, scene, setting, quote and musical leitmotif out of the film wasn't alienating enough!

*I should note I'm using Out of Shadowed Hills for my Conan origin story (though of course since it's a piece of fun fan fiction I can hardly claim copyright or dibs on it), so I'm kinda glad they didn't go with that.
Uttered by Taranaich at 23:44