The Centenary of Fritz Leiber 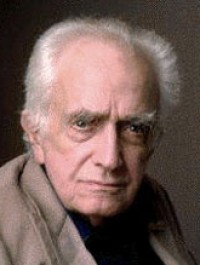 Today is Fritz Leiber's Centenary*.  Despite not actually being blown away by his work,  I feel like I should honour it with a post on my blog. I've only read "The Snow Women," "The Unholy Grail" and "Ill Met in Lankhmar" so far, and to my sadness I wasn't particularly moved.  Underwhelmed, in fact.  I guess I just started off with bad stories: if these were in fact sub-par Leiber, it'd be no fairer to judge him on them than to judge Howard if all I read of his work were the sub-par Conan stories. Leiber deserves more, though, so one of my New Year's Resolutions (early announcement, I know) is to give him another chance.  I have both Lankhmar collections of Fantasy Masterworks, so I'll definitely have a go with them. Maybe I'll crack open Our Lady of Darkness, or hunt down "Gonna Roll The Bones": I've heard good things about them.

In lieu of a tribute myself, I'd rather gather some of the fantastic tributes I've found around the internet, all far more qualified to speak on Leiber than myself: James Maliszweski, James Enge and P.C. Hodgell,  Steve Tompkins, Joseph A. McCullogh, and John Howard's In Memoriam.

So many people speak highly of Leiber, many of whom's opinion I respect.  I must be missing something.  I aim to find out.

*In an earlier version of this post, I inadvertently made the rather profound exaggeration that it was "Leiber's 100th Centenary."  As Michael Halila patiently pointed out, he ain't that old!
Uttered by Taranaich at 21:01