"Jim was most ruined for an automaton..." 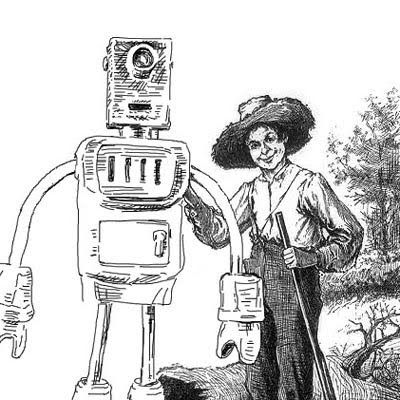 We're editing a new version of Mark Twain's "The Adventures of Huckleberry Finn" that won't be bogged down with what Mark Twain was trying to say about racism.

Famous writer Ernest Hemingway once hailed "Huck Finn" as being "the best book we've ever had." We agree with him-even if he did drink too much.

But this classic novel has been banned from many schools and libraries ever since its first publication, originally because it portrayed the African American character Jim as being human and now because of the book's use of the word "n-word" over two hundred times.

Publisher NewSouth Books is attempting to get the book back on library shelves and in classrooms by publishing a new version that removes the controversial word "n-word" and replaces it with the word "slave."

Critics are calling this "censorship" and "whitewashing of history." We call it "not far enough."

Robots instead of N-bombs: Statistically, people prefer robots to the word "n-word." The word "n-word" is ugly and pejorative. Robots are fun and cool...even when they're trying to take over our world! So we've decided to take the word "n-word" out of Mark Twain's classic and replace it with "robot."

Why robots? Well, there's no denying it: robots are "in" right now. The film "Transformers" made over $708 million around the world. The film "Transformers: Revenge of the Fallen" made over $800 million dollars. The last film version of Huckleberry Finn only brought in $24 million dollars. Even accounting for inflation (which we frankly don't know how to do), it's clear that robots are more popular than Huckleberry Finn.

And that's a MOVIE, not a book.

But why not vampires? They're "in" too, aren't they? Good point, hypothetical question asker. Vampires are "in." But replacing the word "n-word" with vampire would be silly. Robots have a long history in literature and popular culture of being used as a metaphor for slavery and oppression. Replacing the black characters with robots in the book will maintain the integrity of MOST of Mark Twain's themes. It will also make the book more attractive to racists who wouldn't ordinarily read a book sympathetic to the plight of African Americans in the Antebellum South. And this is really about getting more people to read the book.

We're raising money for a short print run of the book. The more money we raise, the cooler the book will be. We have an artist altering some of the illustrations from the original edition of the book to replace Jim with "Robot Jim." We'd like to do all of the illustrations but that is a huge task and adds to the page count making the book more expensive. We would also love to get a Twain or Black History Scholar to write a little something about the use of the word "n-word" in the book to lend us some credibility. This also increases the page count. We'd also prefer to hire a designer to design the book cover and/or the interior layout of the text instead of pre-made templates. Who knows? If we raise enough money, maybe we can do a hardcover editionÉor one where the text is inlaid in platinum on dinosaur bones!

I particularly love the "use of the word "n-word"" phrase, which encapsulates the ridiculousness of the entire Newsouth Books project.  Also, a hardcover edition where the text is inlaid in platinum on dinosaur bones - these people are after my heart.

Now I'm trying to think of all the other stories that would be made awesome by replacing the word in question with "robot."

"Do you defend robots, Atticus?"
"Of course I do. Don't say 'robot' Scout."
- To Deactivate A Mockingbird

The boy, amazed like the rest, raised the light to the figure's face. It was metal. A surprised hum — a faint hum that sounded like the suppressed mutter of the word 'robot' — ran along the deck and escaped out into the night. The robot seemed not to hear. It balanced itself where it stood in a swagger that marked time. After a moment it said calmly: — 'Unit's designation is Wait — James Wait.’
- The Robot of the Narcissus

When people act like robots, no matter who they are the only thing to do is treat them like a robot.
- The Sound and the Fury

America is a wall and you are on the other side. How's a metal man ever going to get a fair trial with the enemy on the bench and in the jury box? My life in human hands? You Jake, that's how. You are my secret weapon because you are one of the bad guys. You don't mean to be but you are. It's how you was raised. Robot, Automaton, Metal Man, Mechanical Person, no matter how you see me, you see me different, you see me like that jury sees me, you are them. Now throw out your points of law Jake. If you was on that jury, what would it take to convince you to set me free? That's how you save my ass. That's how you save us both.
- A Time To Kill

"He aim to make hisself king of Canaan. He sent me to spy dis mornin' to see if Mistah Kirby got through. He sent men to waylay him on de road, cause he knowed Mistah Kirby was comin' back to Canaan. Robots makin' voodoo on Tularoosa, for weeks now. Ridge Jackson was goin' to tell Cap'n Sorley; so Stark's robots foller him and kill him. That make Stark mad. He ain't want to kill Ridge; he want to put him in de swamp with Tunk Bixby and de others."
- "Black Canaan"

Labels: Don't Be Daft, Linkage and Thinkage, Literary Criticism, What In Blazes