The Robert E. Howard forum was shocked to learn of the untimely death of Dan, there known by the username Painbrush, from his girl Sheila.

I really can't think of what to say, or rather, how to properly encapsulate. This is going to be one of those stream-of-consciousness posts.

Dan was one of my favourite first memories of the community: when I introduced myself five years ago, I remember him welcoming me to the fold. I thanked him, and slyly mentioned how jealous I was that he picked such a great handle. I really was a little bit jealous: Painbrush is a great username.

Dan and I never butted heads over anything, but I remember he was involved in some legendary donnybrooks, be it over Howard's writing, his reputation, his worldbuilding, or even something daft. The man was one hell of a Robert E. Howard fan, and took no prisoners in that approach. Though Dan's unique typing fashion and fantastic comedy style made him a great figure of fun on the forum, he showed remarkable insights. For all his "caveman on a computer" persona, there was a fiercely intelligent brain in that noggin: his post on "The Frost-Giant's Daughter" was full of it.

I'm truly glad to have known Dan, even if only over the internet. His jokes always got a laugh out of me, his more serious thoughts were deceptively intelligent and well-thought out regardless of whether I agreed or not, and the forum will be a less colourful place without him.

I'm so sorry, Sheila. Rest assured, the Robert E. Howard forum are with you. As Howard would say, we will all drink to his shade. 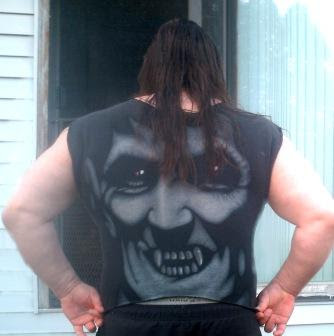