At least, I think this is an April Fool's joke.

Bret McKenzie could be going from being Figwit in the Lord of the Rings to a big-screen presence in The Hobbit.

The Dominion Post can reveal that Sir Peter Jackson is trying to tempt the Flight of the Conchords co-star to take a role in the 3-D Hobbit films now being shot in Wellington.

It would spell a remarkable turnaround for McKenzie, who had a three-second spot as a pouting elf in the first Rings film.

A fan saw him on screen, as Frodo was frantically trying to deliver the ring to Mordor, and thought. "Frodo is great ... who is that?" And from that, the acronym Figwit was born.

It spawned the tongue-in-cheek figwitlives.net website in honour of the spunky elf – McKenzie was listed as one of Who magazine's 100 sexiest people in 2008 – and an hour-long documentary called Frodo is Great ... Who is That?!!

The final Rings instalment The Return of the King also saw the return of McKenzie, as an elf escort to Liv Tyler. He got one line.

He and fellow Conchords star Jemaine Clement later recorded the parody song Frodo, Don't Wear the Ring, which featured on their hit TV series and included the lines, "Frodo, don't wear the ring/ The magical bling bling/ You'll never be the lord of the rings".

Hobbit spokeswoman Melissa Booth did not reply to questions about McKenzie and his role in the film.

Figwit is to Jackson's The Lord of the Rings what the Pederast Priest is to Conan the Barbarian: a background character who does next to nothing, but manages to be one of those characters everyone remembers. 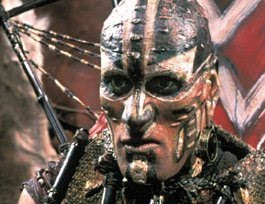 I'm more of a Harad Leader 2 guy, the LotR equivalent of Mahmud, but I digress.

So to have Figwit actually return for The Hobbit encapsulates everything I love and loath about the Jackson films: a bishie elf beloved by fangirls everywhere who gets more screen-time than Beregond, Bergil, Radagast, Glorfindel, Ghân-buri-Ghân, Imrahil, Beechbone, Elladan, Elrohir, Erkenbrand, Gildor, Ioreth, and other Tolkien characters who got shunted for Fralippa's fan-fiction.  Gah.

I really need to find out who Mahmud is.  Perhaps the Conan Completist crowd will know...
Uttered by Taranaich at 00:01