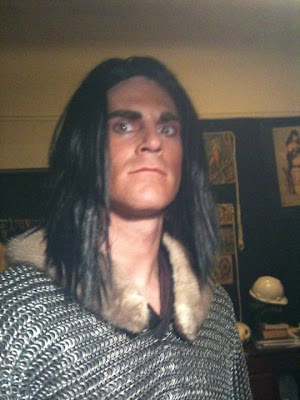 
A barbarian warrior, the lone survivor of a fierce battle, is seduced by a snow goddess and nearly loses his soul. Was it a dream after all?

Robert E. Howard was a writer in depression-era Texas. In 1932, he conceived of Conan of Cimmeria, "the damnedest bastard that ever was", and followed his iconic barbarian through weird and blood-stained adventures in the Hyborian Age.

Fans of REH and Conan don't need to be told this. They also don't need to be reminded of Conan's frustrating struggle with Hollywood to get his story told. From John Milius' 1982 film starring Arnold Schwarzenegger to the current "reboot" starring Jason Momoa, filmmakers have sneered at Howard’s original stories, themes and even at the essential character of the barbarian, Conan.

This is where that stops. This is where the fans take control of the film-making and show how one of Howard’s original stories can be translated into an exciting movie.

We will film in the Sierra Nevada mountains in the winter, not far from the infamous Donner Pass, scene of legendary pioneer cannibalism.

In order to attract the best actors, and bring forth the best in this story through reasonable production quality, we'll need some contributions from Conan's most dedicated fans.

So far, REHTFGD has eight backers and $750 of a target pledge of $5000.  Great fan films have been made with less: with that sort of money and a great amount of effort (which I'm sure Studio Guignol are up to), I can see a very respectable Conan movie being made.  Douglas "Kortoso" Sunlin is uniquely qualified in that he actually knows his way with swords, so the fight sequences will be of a better quality.

There are some nice incentives to support the project, though I'm unsure if they "stack" or not:

This could be the start: the beginning of a new renaissance. We've seen that fan films have entered an era where they could rival professional productions (well, certainly Asylum or Sci-Fi Channel productions), like The Hunt for Gollum and Born of Hope did.  Wouldn't it be fantastic to think of new Conan films that actually adapt one of the trailblazing Howard stories?

And to sweeten the deal, here's a preview:

Everyone take a gander over at the film's thread at the Robert E. Howard Forums. This could be the start of something big!
Uttered by Taranaich at 16:51