John C. Wright on Robert E. Howard and others

As an addendum to my previous post, I'm going to post an example of the two kinds of criticism: one of which I believe someone's entitled to that I can just disagree with, one I do not.

Just so everyone know's what's what.


The first fathers of science fiction, Wells, Verne, and the now-forgotten Olaf Stabledon, wrote for a general audience and were admired and respected as much (or as little) as any other writers. However, the next generation of science fiction writers, including figures like Edgar Rice Burroughs, A. Merritt, and Robert E. Howard, wrote boy’s adventure fiction. Beloved as these stories are to fans like myself, they were comicbookish, aimed at children, and dealt with their themes in a childish way.

These stories are, in my fanboy opinion, simply great, but simply not great art.

- John C. Wright, The Fall and Rise of Science Fiction

Now, I may disagree with Wright's assertion that Howard's (and Burroughs' & Merrit's) fiction were "comicbookish" and "dealt with their themes in a childish way."  I could offer my grievances, but the guy's allowed to have an opinion.  Nor can I really argue with "These stories are, in my fanboy opinion, simply great, but simply not great art."  That too is fine.  He's stating it's his "fanboy opinion," and since art is a monstroustly subjective subject, what is "art" to him might not be art to another person.  What's more, it's his personal blog.  It isn't an introduction to a collection of Robert E. Howard stories.  Thus, he's perfectly within his rights to say this, especially when he unequivocably says that this is just his opinion, not an assertation of fact, or even the majority opinion.  In short, I disagree, but that's all: I'm not going to launch any sort of crusade against him for the crime of disagreeing, am I?

So far, I don't share his opinions, but I'm not going to call him out on them.  I might challenge them - what on earth is "childish" about "Beyond Thirty," "The Moon Pool" and "Worms of the Earth?" - but in the manner of debate and discourse.  John C. Wright is not wrong - I just disagree.  However, his assertion that the three authors wrote "boy's adventure fiction," and especially "aimed at children"?  That I take exception to: not because I have a problem with children's fiction (I still love Lloyd Alexander, after all), but because it's just plain incorrect.

None of those authors wrote their stories with children in mind.  They wrote for the adult market.  Neither the original publications, nor in their letters, do they ever say they're targeting pre-pubescents.  Weird Tales was a magazine for adults, and an exceedingly controversial one at that.  Brundage's salacious and violent covers were about as cosy and unconfrontational as Hustler.

Does Mr. Wright seriously expect me to believe that this: 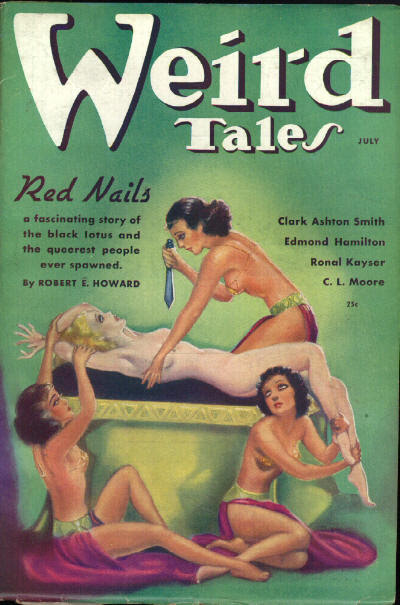 Was aimed at children?  This wouldn't be aimed at kids now, let alone in the 1930s.

Howard, Merritt, and Burroughs were writing for the same audience age group as Stapledon, Wells and Verne.  The only argument that they could be "boy's writers" is that as the years went on, boys started to read them for themselves.  Dumas, Haggard, Sabatini and Stevenson weren't writing their stories for boys, but for adults.  If they got lumped into the "boy's adventure fiction" ghetto, then that's because the literati lumped them there, much like how they lumped all science fiction with Buck Rogers and Flash Gordon.  It's just plain wrong.

So, hopefully people can see and recognize the difference in what I'm talking about.  I disagree with Wright about viewing the authors as dealing with their themes in a "childish" manner, as well as the "great art" question, but that's a matter for debate, not a matter of saying he's wrong.  But saying that authors were writing for a market they were not writing for, especially when his whole argument hinges on it?  That's not on.
Uttered by Taranaich at 20:56