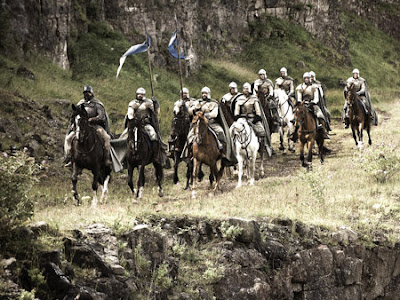 My general apathy with A Song of Ice and Fire is probably one of the most puzzling things about me. How can I not like a fantasy series that's all about treachery, violence, betrayal, political machinations, battles and gritty realism?  A lot of people promised I'd be hooked after A Game of Thrones, but for the life of me I can't get into it. Yet all the same... good golly am I looking forward to the upcoming series.

Entertainment Weekly has just-short-of-a-dozen pictures from the film.  I'm deliberating over whether posting it over at Conan Movie Blog, since it's tangentially related as another Jason Momoa project, but he doesn't appear in the pictures.  While there's no sign of Khal Momo, the contrast between these and the ones for "Conan" is utterly staggering.  All the characters look great, the costumes have incredible verisimilitude, the sets are fantastic, even the quality of the film - it looks great.  The only problems I've noticed from commentators are Daenerys' and Cersei's eyebrows not matching their hair.  Man, if only my problems with the "Conan" film could be so trivial...

I normally try to refrain from silly base proclamations, but I'm going to say right now that A Game of Thrones is going to absolutely wipe the floor with "Conan."  Hell, the fact that it actually features characters from the source material already has it won, anything else is just a bonus.  Still, given the quality of previous HBO productions, the actors and crew, and compare that to the quality of previous Lionsgate productions, actors and crew... yeah, this is a bit of a one-horse race.

See this, Lionsgate?  This is how you do a goddamn fantasy series.  This is what "Conan" should be looking like, not a sub-Hercules: the Legendary Journeys riff.
Uttered by Taranaich at 19:16