Dinosaurs from the Pulps! 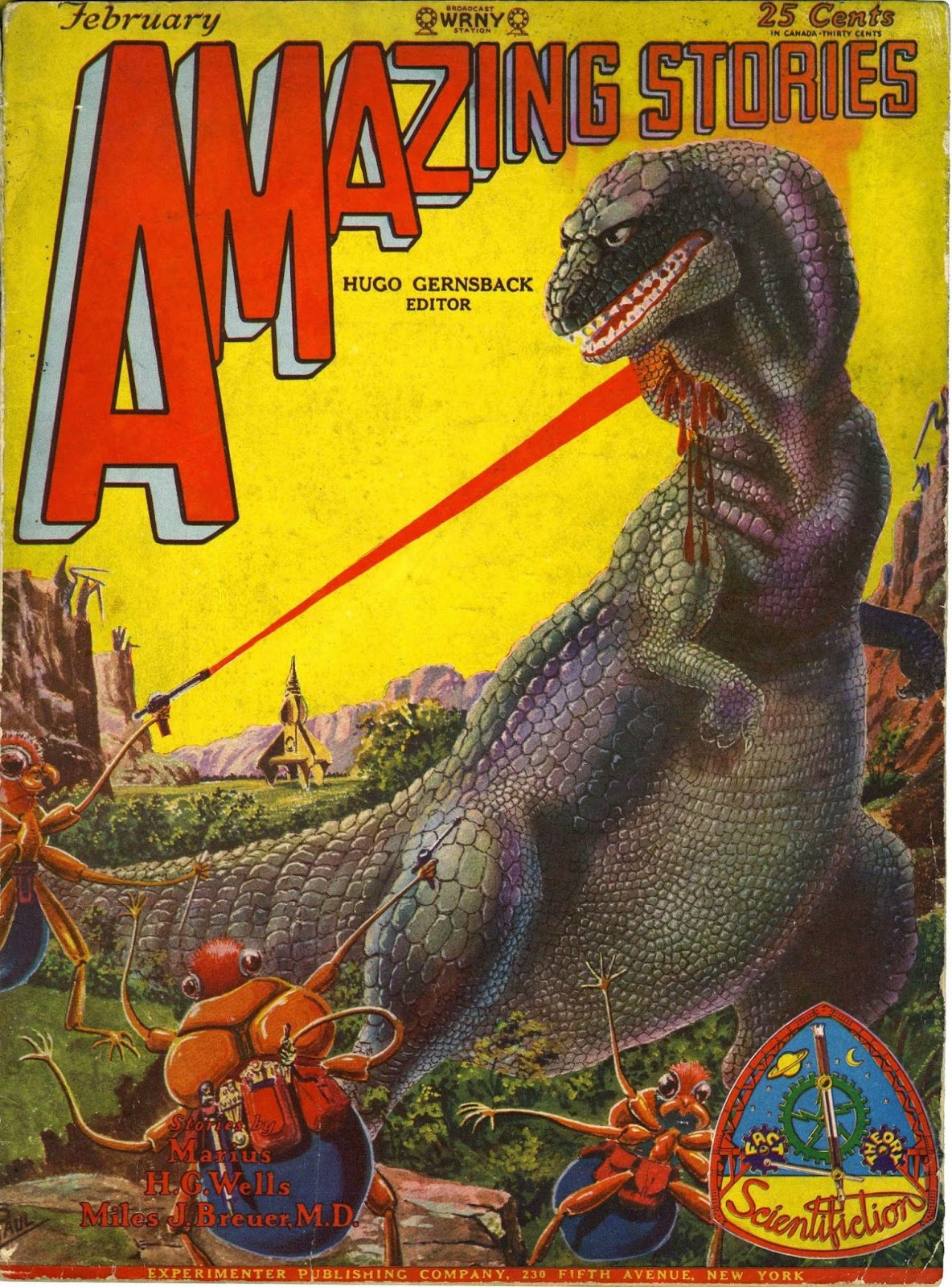 One of the joys of getting into Robert E. Howard fandom is the vast world it opens up before you. Before I got into it, I relied mostly on luck and happenstance to find stories and art that intrigued me, and living in Scotland as I do the availability of those classic American tales could sometimes be hard to come by.

But after years of infiltrating the echelons of Howardom, needling information and hints from the experts and polymaths in funny hats, it's amazing the things you find. On my last Scottish Invasion of Cross Plains, I learned that one of these behatted genii was leaping into the vast sea of pulps in search of one of his other great interests: zombies! And sure enough, he even produced an anthology of twenty classic tales of the undead ripped from the musty yellowing pages of those lurid tomes.

The magic of pulps is that there are just so many different stories and trends out there, you could easily fill a themed anthology with them. Amazons from the Pulps! could feature the likes of "Black Amazon of Mars," "The Golden Amazons of Venus," "Queen of the Panther World," "Slaves of the Jackal Priestess," "Sword of Gimshai," "Black God's Kiss," and other adventures of warrior women. "The Metal Monster," "The War of the Giants," "The Metal Giants," "Between Dimensions," "The Reign of the Robots," "The Ideal," "A Dictator for All Time," and countless more tales of Metal Men could shamble through Robots from the Pulps! Crom knows we have plenty for Stephen Jones' The Mammoth Book Of... series, as he always manages to find at least a few from the Age of Pulps.

And then there were dinosaurs... 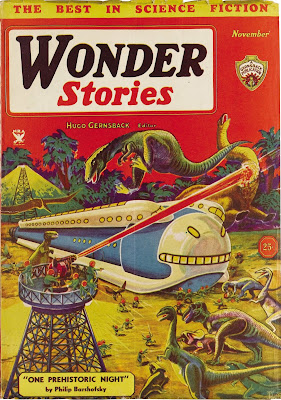 The history of dinosaurs in popular fiction is as long as the field of dinosaur palaeontology itself. Allen A. Debus has two excellent books on the subject in Dinosaurs in Fantastic Fiction: A Thematic Survey and Prehistoric Monsters: The Real and Imagined Creatures of the Past That We Love to Fear, which I consider essential reading for anyone with an interest in dinosaurs in literature, while Paleoimagery: The Evolution of Dinosaurs in Art (co-written by Diane A. Debus) is a brilliant overview of the changing vision of dinosaurs in popular consciousness.

Prehistoric Pulp recently pulled a Jurassic Park and returned from seeming death, and discussed a few of these pulp dinosaur stories. He also tracked down some links to those short stories too, for which I'd like to give immense personal thanks, as this set me on a grand quest to pore through every pulp magazine on the site in search of dinosauria. 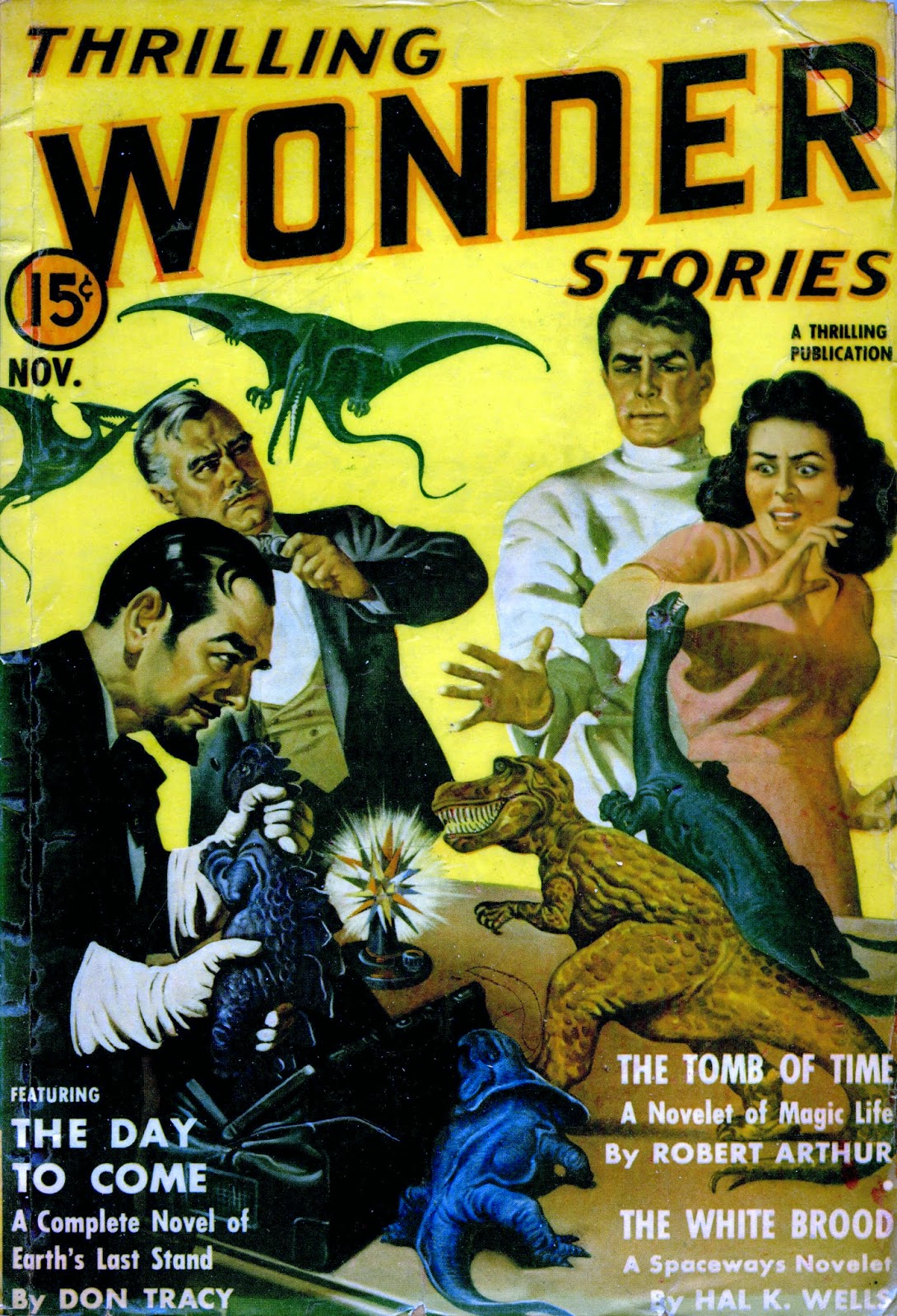 Yet, alas, Prehistoric Pulp spoke true: some of the pulp stories I learned of are likely to be difficult to find. Fortunately, there are ways: I managed to track down "The Death of the Moon" via a fascimile of Amazing Stories #29, as well as several other stories collected in Chad Arment's highly eclectic and intriguing anthology Sauria Monstra: Dinosaurs, Pterosaurs, and Other Fossil Saurians in Classic Science Fiction and Fantasy. Online has been a great boon, even if the one copy of "Into the Mesozoic" I've found is tantalisingly incomplete - gah! Now I know how Zofia Kielan-Jaworowska felt...

Perhaps the greatest fun to be had finding dinosaurs in the pulps is that, despite being bizarrely less commonplace in pulp adventures than aliens or robots, there's a remarkable variety of styles and subgenres of dinosaur pulp. There are the usual "Lost Worlds" of which Verne, Conan Doyle and Burroughs are the most famed discoverers. Related to those adventures are "Prehistoric Tales" set in the distant past with either anachronisic hominids, or even the dinosaurs themselves, as protagonists. As fantastic fiction began to turn to high science, tales of scientists going "Back in Time" became common: chronoscopes allowed scientists to view the past, mind-projection sent consciousness through the aeons, or time travel permitted humans to actively step foot into the Cretaceous period.

And then, sometimes it got weird. There are a surprising number of what Debus calls "Xenosaur" stories which posit the theory that in faraway alien planets - commonly beneath the impenetrable toxic clouds of Venus - lie a prehistoric world similar, if not identical, to Earth's Mesozoic. Another curious subgenre is "Dinosaurs vs Aliens," where our fellow Earthicans are the only thing standing between aliens and their conquest of the blue marble - yes, there is more than one story which has the same basic plot as that gag from Futurama, at least two of which predate the computer (and Grant Morrison & Barry Levinson's comic.)


There are even a multitude of "Back from the Dead" tales of dinosaurs turning up in modern times - unfrozen, awakened from hibernation, even a story which features a scientist resurrecting a dinosaur through genetic methods three decades before L. Sprague de Camp's "Employment" and almost a full century before Jurassic Park came out - albeit in this case through application of plant hybridisation to animals rather than direct DNA manipulation & cloning.

There are already a few great anthologies which collect dinosaur stories: Ray Bradbury's Dinosaur Tales,
Behold the Mighty Dinosaur, The Science Fictional Dinosaur, Dinosaur Tales, Dinosaur Fantastic, Dinosaurs!, The Ultimate Dinosaur, Dinosaurs II, Dinosaurs, Return of the Dinosaurs, and of course Sauria Monstra. As such, there are several great stories which have been published dozens of times, like Ray Bradbury's superlative "A Sound of Thunder" and Conan Doyle's "The Lost World." Yet there are a number of stories from the Golden Age of Pulps which I think are deserving of a new audience. 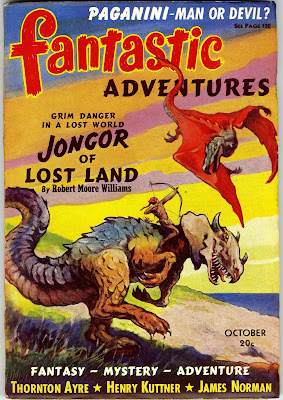 I've read a fair amount of dinosaur pulp stories, and there's definitely room for a collection of them. Alas, copyright considerations would probably preclude the inclusion of Edgar Rice Burrough's Tarzan stories set in Pellucidar, though I would absolutely love to have some excerpts from Tarzan the Terrible or Tarzan at the Earth's Core. Same for the Doc Savage novel The Land of Terror.

Even so, on my odyssey through the realms of dinosaur pulp fiction I've come across at least 20 or so fun stories from the 1910s to 1930s, and some more from just before and after. While you can't really have an anthology of pulp dinosaur stories without including "The Lost World" and "The Land That Time Forgot," I think excerpted choice chapters would be better than filling half the entire book with one or two novellas. Best of all, there's also a way to include the Weird Tales Triumverate, since all have written something that includes a dinosaur or an extremely close approximation. All it needs is a name. "Dinosaurs from the Pulps! 20 Classic Tales from the Jurassic to Lost Worlds"?

So, in another series that will never end, I'll be dipping into classic pulp tales involving dinosaurs every so often, some of which I think would make excellent inclusions in an anthology. Seems a great year for it, no? 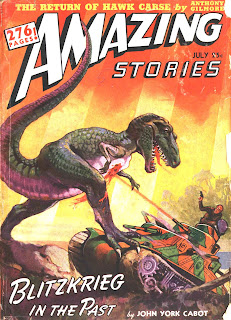