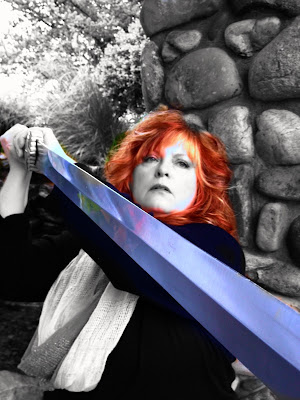 You know you're serious about a Sword-and-Sorcery adaptation when your spouse takes a picture of you with a sword. And you know you've found your soul-mate when they let you stab them for a photoshoot.


I still haven't checked out Eric Trautmann's Red Sonja beyond the first few issues, but I got the general impression that his work was well-received, so it's with a mixture of disappointment and surprise that I learn Gail Simone will be taking over for Dynamite's relaunch. Simone is an author whose work I haven't read, though she's been getting rave reviews for her work on Birds of Prey, Wonder Woman, and Batgirl, so she seems a natural fit for the She-Devil, following Jen Van Meter into the Hall of Female Red Sonja Writers. She also gets clearly "gets" it:

Gail: Anyone following my work has probably seen that I love shoe-horning in fantasy and pulp elements into my superhero books. Catman was inspired by Tarzan, the Secret Six went to Skartaris, Wonder Woman met Beowulf and Claw. To be blunt, I love that stuff.
I love the earthy primal quality of it, I love the pulp mythos from people like Lovecraft and Burroughs, and of course, Robert E. Howard.
- Gail Simone, welcome to the list

And in this more recent piece:

I love the primal storytelling that can be found in period pieces and fantasy settings. The world is complex and full of subtlety, it’s kind of lovely to be able to tell stories of loinclothed, sword-wielding heroes fighting demons in the desert. I’m a fan of the cultured, mannered fantasy of Tolkien and others, but there’s a tremendous appeal to the bloody, half-naked asskickers of Robert E. Howard’s earthier imaginings.

My first contact with Sonja was definitely in comics, these immaculately told stories of this incredibly dangerous woman. I loved them immediately. I wasn’t aware that she was not a direct adaptation of a Howard character, but rather an amalgam of several of his toughest female adventurers. But it’s a mistake to discount the Howard influence in those stories, it’s in the setting, the tone, it’s in everything.

I’ve been re-reading a lot of Howard stuff (and the Sonja comics) for this assignment, and one of the exciting things is rediscovering that Howard was a bit of a proto-feminist, he created many amazing female hell-raisers. There’s stuff that time has thankfully passed by, but some of his fiercest, smartest, toughest characters were female.

... My favorite Howard barbarian story is possibly Red Nails, which has so much of what I like about the sword and sorcery genre, kickass heroine, lusty bloody adventure, giant serpents, and a powerful and disturbing allegorical twist. I’m very inspired by the mood and tone of the Howard books, but also the visual kick of the best of the comics work—in particular, I love the monsters and mythical aspects.
- Gail Simone - why isn't SHE writing Conan!?!


The internet's been abuzz about this famously feminist writer and what it could mean for Big Red. But of course - since we're dealing with general comic news sites who aren't always up-to-speed on REH matters despite all the information they need being literally thirty seconds away - then we get that problem.


Created by Robert E. Howard in 1934, Red Sonja is a high fantasy sword and sorcery heroine known for her fiery red hair, bikini-like armor, indomitable will and legendary fighting prowess. She was originally adapted for comics by Roy Thomas and Barry Windsor-Smith, first appearing in Conan the Barbarian #23 from Marvel Comics in 1973.

- Comics Alliance, which stands by this statement despite Brad Ellison's correction

Red Sonja was created by Conan author Robert E. Howard for his short story, "The Shadow of the Vulture," which was published in 1934.
- icv2

Red Sonja, the She-Devil with a Sword, is a fictional character, a high-fantasy sword and sorcery heroine created by Robert E. Howard, and adapted for comics by Roy Thomas and Barry Windsor-Smith. She first appeared in Conan the Barbarian #23 (Marvel Comics). Red Sonja has become the archetypical example of the fantasy figure of a fierce and stunningly beautiful female barbarian who typically wears armor resembling a bikini or lingerie. For nearly a decade, Sonja has had many successful series with Dynamite Entertainment, and she now appears monthly, as well as in mini-series and one-shots, all published by Dynamite Entertainment.
- So many sites I swear it must be part of Dynamite's press release 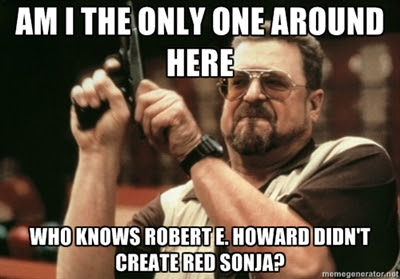 To her credit, Simone is not only well aware of Sonja's literary roots, but is quick to point out that Sonja and Sonya are very different characters:

While she first appeared in comics in the '70s, Red Sonja was very loosely based off a Robert E. Howard short story character from the '30s. Did you go back and look at the story or the old comics for inspiration, or are there any specific eras of "Red Sonja" you're pulling from in your approach?
The Howard story is a far different character from the Sonja most people are familiar with. Ours is more the classic, better known interpretation. She's still a stone cold destroyer, but I think people are going to feel her personality very deeply. That's been the most fun part, for me.
- Simone interviewed by CBR, who also get it right by noting Sonja being "very loosely based" on Sonya

GM: What are the influences that you’ll bring to Sonja? Were you a fan of the original and the Thomas Conan series?
GS: Well, the original Howard version is quite different…a nifty character, but not at all the Sonja we recognize today. I love the classic Sonja, and I’ve been a big fan of the Dynamite version, which has had some of my favorite creators on it; Mike Oeming, Mike Carey, Ron Marz, and lots more.
They’ve done considerable updating, but we’re going to go even further. This is a bawdier, rowdier, lustier Sonja, and that’s a very, very good thing. Everyone knows that guys are too sensitive for proper blood and guts stories (kidding, kidding).
- Simone interview with Wired

Speaking of previous versions, which is your favorite, and do you trace the character all the way back to Robert E. Howard’s Red Sonya of Rogatino?
REH fans know that his Red Sonya bears very little resemblance to the character we have all grown to love.  So our Sonja is definitely more of the comic book character.  However, the setting, that's Howard.  It's one of the great mega-fictions, one of those universes that inspires writers to write it themselves.  We're using that stuff!
- Simone interview with ICv2


So if nothing else, we don't need to fear Simone mixing things up like many are wont to do. But this problem isn't new, oh no, not by a long shot.

Picture that. A veteran action director taking on the swords, sandals and sweat of Amber Heard in a chainmail handkerchief (that’s trying to pass as a bikini). Go ahead. Keep picturing it. It’s potential to kick several thousand cubits worth of ass is high, but at any rate, it seems like it could make Robert E. Howard fans happy.
- Cinema Blend should drop by the Robert E. Howard Forums

The Conan the Barbarian comics are of course based on Robert E. Howard’s 1930s stories. The characters of Red Sonja and Conan being from the same universe, it’s interesting to see production company Nu Image trying something like the current Avengers film continuity, with characters having their own movies, then appearing in others, etc.
- Filmonic (though the author very graciously cut the second sentence when I pointed it out to him)

The character is a fiery-haired warrior in a chainmail bikini who seeks vengeance on those who destroyed her family. Brigitte Nielsen played the character in a 1985 feature which also starred Arnold Schwarzenegger.
Simon West ("Lara Croft: Tomb Raider," "The Mechanic") directs this new incarnation of the Robert E. Howard-created character.
- Dark Horizons

Going from being cast as 409 to Red Sonya of Rogatino, that’s like finding a pot of gold at the end of a rainbow and getting a free drink on the side.
- Nerd Bastards seem to have mixed up their Reds

Later this year she (Rose McGowan) will be seen as the female lead in a Conan the Barbarian remake, which will spin her character off as the lead in Red Sonja.
- tvguide.com has at least four things wrong in that sentence


This is why I feel the need to keep up to date on the currently limbo-bound Red Sonja film despite being, shall we say, very ambivalent to the character. Much as I'd like to consider her in a separate universe from Robert E. Howard's Hyborian Age and his historical Red Sonya, popular culture at large doesn't seem to want to.  I don't know if Dynamite are obligated to credit Robert E. Howard as Sonja's creator by Paradox/CPI, or if they're just riding the literary cred: whatever the reason, Howard is credited as the creator of Red Sonja, even though he truly isn't.

Although the Conan character himself does not appear in the movie (and Schwarzenegger consents to play second fiddle to star Brigitte Nielsen in the part of Kalidor), the source material for the screenplay is once against from the Conan stories of Robert E. Howard.
- The Modern Amazons: Warrior Women On-Screen

Obama is dressed to resemble Conan the barbarian and Palin is depicted in the chain-mail bikini normally worn by the Robert E. Howard character Red Sonja.
- War, Politics and Superheroes: Ethics and Propaganda in Comics and Film (which has a whole midden of other problems I'm not going to get into)

The first was thematically dominated by the work of Robert E. Howard, whose characters Conan, King Kull, Bran Mak Morn, Solomon Kane, Red Sonja, and others have inspired movies, television programs, pastiches, and countless imitators.
- A publication called the Encydlopedia of Fantasy and Horror Fiction should know better


I have a few problems with Red Sonja, and for future reference, I'll discuss them on this blog at some point. This will function as a variation on a possible "Newcomer's Guide to REH" regarding the character, though with a bit more personal opinion than a final article would end up with.

Here are the similarities:


Similar enough, it seems - but what of the differences?


While it seems to be a matter of opinion on whether Red Sonja should be considered an "alternate version" of Red Sonya, or a new character inspired by the original, I tend to go for the latter: Sonja's personal history is so profoundly removed from Sonya's that they end up profoundly different individuals.

I hope that Simone's Sonja - and her interpretation of the Hyborian Age, which I'm guessing from previews will be more of the Marvel Comics tint than the recent Dark Horse ones, in keeping with Dynamite's established aesthetic - will not only show that Red Sonja can be a worthwhile character on her own, but possibly open new readers up to the original. Maybe Dark Horse will bring her aboard for an REH-related project: who knows, maybe that Dark Agnes comic that's been rumoured could have a guest issue. Simone is well-regarded in feminist circles, and wouldn't have to work hard to highlight Howard's proto-feminist creations. I could certainly think of worse writers to take on Howard's redheads.
Uttered by Taranaich at 03:27