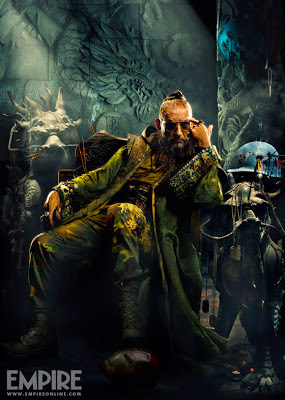 What could have been...


Saw it a few days ago, before I went to the States. I’m not going to write a full review, but I do feel sufficiently moved to comment on one thing that really got my brain whirring – the villain.

As it is, Iron Man Three is another fun superhero film with top-notch effects, some sparkling dialogue, a few very inventive set pieces, one or two moments of attempted profundity, and plenty of nods and winks to fans of the comics. In my opinion, it’s better than the second film, though not as successful as the first: it’s largely middle-of-the-road as Marvel Cinematic Universe films go.

But the villain! What an incredible, brilliant, paradigm-shifting antagonist the Mandarin was... or could have been, if the film had any guts.

Alright, so Ben Kingsley isn't really the Mandarin: he's an actor named Trevor Slattery (a nod to Tony?) vaguely reminiscent of Ricky Gervais in general mannerisms. The real Mandarin is Aldrich Killian, who uses the Extremis virus to make himself breathe fire. And he has a nifty dragon tattoo on his chest, which is probably the closest we'll get to Fing Fang Foom in the Marvel Cinematic Universe.

A lot of people think it's a cool twist, to present this imposing, terrifying warlord, then yank the curtains to reveal The Wizard Was Just A Man All Along, that the real danger was the one you didn't suspect. Except in this case, everyone suspected it, because he was played by Guy Pearce, and no businessman in a suit in an Iron Man film is ever going to be a good guy.  But even so, you'd think that such a twist - especially in conjunction with the idea of a manufactured figurehead for fear and hatred, which is solid - would be unexpected and daring. On the contrary, I felt it robbed the film of something far bolder.

"I would say that we struggled to find a way to present a mythic terrorist that had something about him that registered after the movie's over as having been a unique take, or a clever idea, or a way to say something of use. And what was of use about the Mandarin's portrayal in this movie, to me, is that it offers up a way that you can sort of show how people are complicit in being frightened. They buy into things in the way that the audience for this movie buys into it."

"And hopefully, by the end you're like, 'Yeah, we were really frightened of the Mandarin, but in the end he really wasn't that bad after all'. In fact, the whole thing was just a product of this anonymous, behind-the-scenes guy. I think that's a message that's more interesting for the modern world because I think there's a lot of behind-the-scenes, a lot of fear, that's generated toward very available and obvious targets, which could perhaps be directed more intelligently at what's behind them."

So if you follow Mr. Black, he's saying he wants people to remember the terrorist as a fiction created by people's need to be feared, that it's the anonymous people behind the scenes generating the fear. This strikes me as a woefully bad idea, for the simple fact that these people actually exist.  Sure, there are a lot of bad people out of the general public eye, and there are many people who are artificially and unfairly pilloried as terrorists, dictators and more - but people like Arkan, Kabuga, and Al-Zawahiri are part of our history, even our present. And the biggest irony? You could easily have made the audience "complicit in their own fears" while keeping the Mandarin a genuine menace.

See, there's all this talk about Tony "making his own demons," which obviously alludes to Killian. Of course, the previous and first bit of the film imply that the Mandarin is the actual demon, only to pull the rug out and "reveal" that Killian's the bad guy all along.  The problem is, I think the Mandarin is not only a VASTLY superior choice in terms of "the demon Tony made," but would've presented one of the most intelligent and thoughtful takes on terrorism in any superhero film.

See, throughout the series Tony's dealing with the fact that he's a war profiteer: he's spent all this time, ingenuity and money on creating weapons of mass destruction, including the suit.  But he's never fully confronted the consequences of all those years killing thousands, if not hundreds of thousands, by proxy.  Enter the Mandarin: he was presented as a terrorist leader, a charismatic tyrant a la Umarov or Kashmiri (in the movie compared to Bin Laden and Gadaffi, but he's far more insidious than that) with more than a few nods to Castro.

Now, if it turns out Mandarin & the 10 Rings (alluded to in the first film) gained power because of the chaos resulting from the use of Stark Industries weapons, then THAT would be brilliant.  It would show a modern view of terrorism that isn't informed by gung-ho jingoism or simplistic black-and-white politics. It would show that the years of Stark's ironmongering have consequences. The many men, women and children whose lives were destroyed with Stark's weapons were vulnerable, and manipulated into following a phony saviour (Mandarin), indoctrinated into fanaticism that could be anything from twisting religious sensibilities or corrupted patriotism.

How powerful would it be for Stark to realise that he was responsible for the Mandarin?  To realise that so many people - normal, reasonable people - had been pushed and pushed so hard and enticed by such evil individuals that they become fanatic tools.  That he was responsible for the death of those people in that wee boy's town. And what's more, it's still happening: War Machine (cynically renamed Iron Patriot) goes off on manoeuvres, explicitly representing American interests complete with garish Old Glory paint job, invading and searching foreign states. Feeding the Mandarin's army.  There's even a scene where he breaks into a (non-located but clearly Middle-Eastern) house, terrifying the occupants, as well as one where he breaks into a sweatshop full of hijab-clad Muslim women. The more War Machine and Iron Man fight the terrorists, the more the unintended victims are drawn to the terrorist cause - and the more terror they spread.

But by having Killian be the power behind the throne, you completely rob Stark from that responsibility.  What did Tony do to make Killian so furious?  He blew off a nerd at a party.  How could anyone possibly hold him responsible for Killian's crimes?  You might as well blame the man who rejected Hitler's application for art school for World War II.  Tony has no reason to feel responsible, he did not "create" Killian in the way he (could have) "created" the Mandarin. The focus is taken completely away from the Mandarin and the entire terrorism plot, and given to yet another story of a white businessman in a suit testing out new toys for war and profit.

The Mandarin could have shown Stark finally, truly, acknowledge the demon he created: a reflection of terrorism as it stands in the world today, the idea that we create our own monsters.  The Mandarin represents every casualty or a Stark missile, the family of those killed and maimed who were seduced by evil in their darkest despair.  Killian was Edward Nigma by way of Julius Kelp (seriously, Killian & Stark's first meeting played out almost identically to Nigma & Wayne in Batman Forever): a nerd nobody takes seriously who transforms into a suave, smooth god of sex and coolness through the science nobody was willing to appreciate. 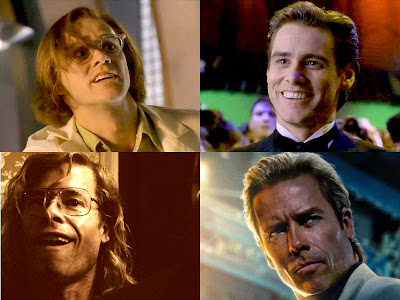 I refuse to believe I'm imagining this.

As it is, Iron Man Three (I still don't know why they went with spelling as opposed to digits for the three) is a fun diversion, lots of cute Downey Jr. banter, and enough action pieces to keep interest. But man, if they had the guts (and a better writer/director) it could've been something special.

Also, three things that should have happened but didn't:

1. So you'll give the kid a garagefull of presents, but leave the poor techie in the lurch without so much as a card?
2. At no point does War Machine arrive to KISS' same-titled track.
3. You have the President of the United States in Iron Patriot armour, yet you DON'T have him lay the smackdown on a few bad guys?  What's wrong with you, Shane Black?
Uttered by Taranaich at 08:22