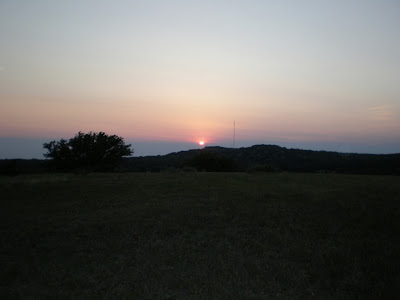 After the Howard Days festivities, most of the gang was getting ready to leave, though some remained for Breakfast: Matthew, Paul, Barbara, Tim, Ed, Jim, Indy, Cheryl, Jeff, Chris and others. I talked to Tim about Scotland and its lore and Barbara about various subjects. One-by-one, sometimes two-by-two, we bid goodbye to them all. Eventually only me, the sisters, Barbara and Paul were left.

We packed our bags, getting ready for a treat: Paul Sammon invited us to the cinema to watch Prometheus. Originally this was to take place in the evening, but he had to reschedule for the afternoon, so we got ready quickly and head to Brownwood. I'll probably review Prometheus at some point: suffice to say, I liked it for its ideas and intent rather than its execution. We all discussed the film on the drive back, and we all agreed that it was a good film that we couldn't really get a full handle on. Aurelia met up with us in the late afternoon one last time before she head on home to Arizona.

Then we had dinner with Barbara at Dairy Queen, talking about such disparate subjects as dancing, cinemas, Howard fandom, our friends in Arizona, and Scottish colloquialisms. Also, to my absolute shock, I discovered that - at this particular restraunt, at least - you can buy milk at Dairy Queen. I am utterly astounded: either this was a relatively new thing, or somehow, my indignation at being unable to purchase a glass of milk at a place called Dairy Queen has made a difference. Probably the first.  But who knows.  Unfortunately they didn't have chicken caesar, so I made do with what I was told was thousand island (didn't look much like it to me, maybe it's like how gravy over here's different).

We got home and sat in the courtyard of 36 West, talking with Paul about the usual, whilst being eaten alive by bugs bugs bugs, hopefully giving them indigestion in the process. Then we said our goodbyes, and in no time at all we were back at Abilene Airport, then Dallas Fort Worth, then riding a metal bird across the sky.* While America and her people have been good to me, your home's your home, and I started to hum "Loch Lomond" as I recognized the glaikit moors and damp hills of my beloved Scotland.

Now I'll get back to work, as I want to use all the energy I've accumulated in America to get cracking on "80 Years of Conan," the encyclopaedia, and a couple of other secret projects. In the meantime, do go back and check Part 1, Part 2 and Part 3, as I've updated them with a few more comments, and photographs. Can't wait for next year!


*I watched two films, Chronicle and Journey 2: The Mysterious Island. Chronicle was disappointing in that it was a very conventional film that happened to be told via found footage, borrowing liberally from Akira and just about every film that uses superpowers as metaphor for adolescent angst. It's the same issue as Cloverfield: despite the "realism" of the found footage style, the actors are all noticeably of that very American Teen Drama style of acting, and they're all ridiculously handsome. Kind of kills the verisimilitude they're going for when everyone looks like cast members of The OC. The villains of the piece are just preposterously over-the-top, so cartoonish and outlandish, you can't understand how they've survived this long without crossing the wrong person. And, most infuriating of all, they once again apparently live in a world where there are no superheroes. It's bad enough where Zombie movies refuse to use "the Z word," but fercryinoutloud, they have to look up telekineses in a book? I really hate this conceit in films, where by avoiding comparisons to other films in their own genre, they actually make the films more unrealistic in the process.  I refuse to believe that nobody in Cloverfield thought or said the word "monster," and I refuse to believe nobody used the word "superhero" in Chronicle.

Journey 2 was a affront to the work of Jules Verne (I'm as shocked and surprised as you are that the director of Cats & Dogs: The Revenge of Kitty Galore was not in fact the second coming of Fleischer), but at least it has the dignity of explaining why it isn't a straight adaptation: like the previous film in the series, this treats the original Verne novels as based on real events, thus making them more like latter-day sequels than adaptations. I won't lie, there are two reasons I chose this over The Iron Lady: one, it had Dwayne Johnson, who I consider to be immensely entertaining when allowed to ad-lib; two, it promised monsters. I tell you one thing, this film had 100% more giant bees than The Iron Lady did, and 50% more monstrous reptiles. Louis Guzman almost ruined it with a truly heinous "comic relief" character, but Vanessa Hudgens provided ample enough distraction during those moments, and Michael Caine proved all those who thought he could sink any lower than Jaws: The Revenge very, very wrong.
Uttered by Taranaich at 23:38