A Sound of Thunder That Can Never Be Silenced 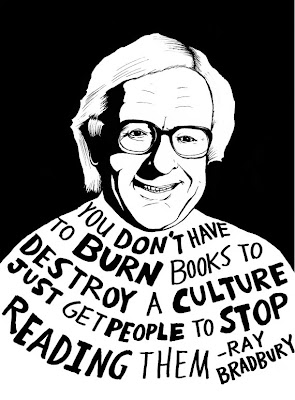 Coming back home from Scotland after Howard Days is always bittersweet: bitter because it'll be a full year or near enough until I can see all those wonderful people again, but sweet, because my life is immeasurably richer through having been there. Likewise, the death of a great creator - author, artist, director - leaves me feeling bittersweet. Bitter for the loss of life, the silencing of a great voice, the knowledge that there will be no more art from that wondrous mind, the crushing finality of it all; but sweet, for the knowledge, appreciation, admiration, even love, for all the beauty and wonder that the creator gifted unto the world.

So it is this month with the passing of Ray Bradbury, one of the greats of speculative fiction. In his truly enormous oeuvre one can find science fiction, fantasy, horror, drama, romance, history, existentialism, ranging from the touching to the chilling, from the cosmic wondrous to the humble down-to-earth, heartbreaking and heartwarming. And now all the books and plays and tales he's written are all he would ever write. To even summarise all of those magnificent works would be redundant, if not impossible: I have barely read a percentage of his vast literary output. But I can talk about the stories I have read, and they easily rank alongside the best fiction I've had the pleasure to read.

There are the classics, the quintessential Bradbury novels. Farenheit 451, Dandelion Wine, The Halloween Tree, Something Wicked This Way Comes. There are the iconic short stories. "A Sound of Thunder," the classic cautionary tale that made the Butterfly Effect a feature of popular jargon; "The Fog Horn," a thrilling creature feature with a tragic touch which would inspire Godzilla and The Beast from 40,000 Fathoms; "The Veldt" and "The Small Assassin," transforming innocence into bonechilling terror; "The Pedestrian," a typically stark musing on a dystopian future; and the truly sad "There Came Soft Rains," a story with a twist that I won't spoil through mentioning its genre.

But then there are the slightly lesser-known tales. "Tyrannosaurus Rex," an ode to the other Ray, Willis O'Brien, and other practitioners of stop-motion animation with a biting jab at Hollywood ways; "The Shape of Things," the closest I think you can come to a heartwarming Cthulhu Mythos story; "Embroidery," once again proving that little old ladies are the only thing standing before the apocalypse; "The Exiles," a tribute to Weird Tales practitioners of the past; "I See You Never," a non-SF story that's nonetheless heartfelt and affecting.

Some mothers read their children fairytales, or children's stories. My mam read Ray Bradbury stories to me and my sister when we were little. Bradbury was the first author I recall whose books I actively sought out specifically because they were written by him: before, I went by genre. But for the first time, when I saw "Ray Bradbury" on a bookshelf, I wouldn't even have to look at the back to see if it's a historical adventure, science fiction tale, or fantasy yarn - the author's name itself was a mark of quality, that I would find what I was looking for. So I devoured The Martian Chronicles, R is for Rocket, The Illustrated Man, and especially The Golden Apples of the Sun, because more than any other author, I think, Bradbury felt like a kindred spirit to me: he shared that sheer love of wonder, adventure and knowledge that few other authors professed, be it the eternal glory of the cosmos, or the small joys of the little child.

He is, in essence, one of the reasons The Blog That Time Forgot came into being, and is practically the one author who encompasses everything within its interests. He was neither exclusive to science-fiction nor biased towards fantasy: he loved story. Great stories are not bound by genres or conventions or styles, they are what they are regardless of the grade of paper upon which they're printed, the quality of publisher, or the fact that they have beasties or extraterrestrials.

Bradbury went on to great mainstream success, with several beloved film adaptations, scripting a number of "Twilight Zone" episodes, and being generally accepted by those imaginationally-challenged individuals who dismiss all "genre fiction" as "not real literature" (because anything without spaceships and dragons isn't a genre - those poor, unfortunate souls). After all, Ray Bradbury can't be writing that silly science fiction and fantasy stuff - he's actually good. "Calling Ray Bradbury an author of science fiction," they might say, "would be like calling Aldous Huxley, George Orwell, or J.G. Ballard authors of science fiction. And, well, that would just be silly, wouldn't you agree?"

To his immense credit, Bradbury rejected such myopic and lamentable worldviews, and wore his Speculative Fiction Author badge proudly upon his breast: he was a fan through and through. He was a man whose imagination refused to be constrained by such restrictions as genre, or style, or setting. He was a man who appreciated the benefits of technology, but was wary to see it replace the simple and mundane joys of life. That is what made him so wonderful to me.

As I was growing up, C.S. Lewis' assessment of the immaturity of those who seek to be very grown up rang true. My colleagues at school were starting to drift away from the awe at all things, their imaginations became stagnant and clouded by mundane concerns. They saw their parents obsessing over finances, careers, work and all those things which suck the life out of an imagination when they're forced upon a mind, and started to reject their childlike wonders. I never did. "Emotional immaturity" meant I clung fiercely to my dinosaurs, my spaceships, my dragons and ghosts and robots while my peers went on to think about things that "mattered": driving a car, getting a job, wooing a girl, doing their homework. At some point, even I started to do that, but by then it was too late: I was far behind my peer group, and so I never got that far save in scholarly studies, where my love of reading, science, history and all that served me well.

I regret not one moment of my time "wasted" thinking about ancient worlds, lost cities, far-off planets, future societies, and faerie realms. I only regret not doing what Bradbury suggested, and sticking fiercely to my guns in the face of soul-crushing adversity - packing up my dinosaurs, and leaving the room. But I craved for someone, anyone, who felt the same. I didn't get that in High School: only in books did I find people who were more interested in aliens and monsters and mesozoic fauna than pop music or fashion or football. All I wanted was to scream "if you're going to enjoy watching a match, listening to pop, and trying out clothes, then I'm going to enjoy reading old paperbacks and scientific periodicals. And you're not going to do a damned thing about it." The only real difference between a group of friends sitting around a table playing Dungeons & Dragons, and a group of friends sitting around a table watching a football game, is that one is "fashionable" - in other words, deemed "acceptable" by the great amorphous fickle mass that is Popular Society - while the other isn't.  And you know what Wilde said about fashion.

Bradbury has stepped through the veil, to the worlds beyond worlds, and left behind an opus. He has joined the ranks of great authors, and though obviously appreciated in his lifetime, the finality of death means that his work can be assessed and critiqued in a new way, one that is subtly different from that of a living author. The life of Ray Bradbury is over, but the legacy of Ray Bradbury has truly just begun. But more than that, Bradbury gave me courage. He gave me the courage to reject bowing to the mob for the sake of fitting in. There is nothing wrong with liking fashion, pop music and football if you truly enjoy those things, but there is everything wrong with just pretending to like it simply so that you aren't mocked for liking things that are outside the norm. Bradbury gave me a reason to just say no, and for that, I'll always be grateful. The thunder that is the formidable imagination of Ray Bradbury has fallen silent - but the echoes of the thunder will roar across eternity.

Thank you, Ray: when I get to where you are, let's hang out together, and play with our dinosaurs.