The Third Scottish Invasion of Cross Plains: Day One 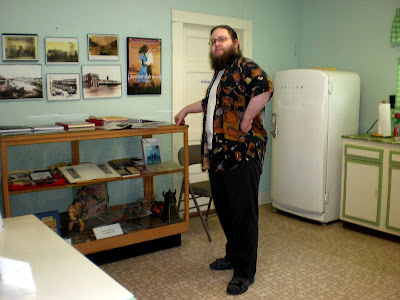 (Note: I'll still be posting "80 Years of Conan" posts, and I read all comments, but I probably won't get around to replying or posting until after Howard Days.  In the meantime, I'll be typing up quick reports at the end of each day.)

Well, this was a good day.  First off, the weather was fantastic (for me), in that the terrific storms which had rocked Dallas Fort Worth airport blanketed the land in a haze of rain, lasting long enough to cool the ground and air. It was almost like being back home, except rather than chilly and windy, the air itself was warm. Like being in a lukewarm shower. After three weeks in the blazing Arizona heat, I deeply appreciated it.


First off was breakfast with Paul Sammon and Barbara Barrett, with much conversation about classic films, television, radio and books, sprinkled with anecdotes humourous and ribald. I always greatly enjoy talking with Paul and Barbara, so talking with both of them over a plate of hash browns, over-easy eggs and "biscuits" (which are more like our scones than our biscuits) with creamy-white gravy (as opposed to the dark brown stuff I'm used to) was a joy. 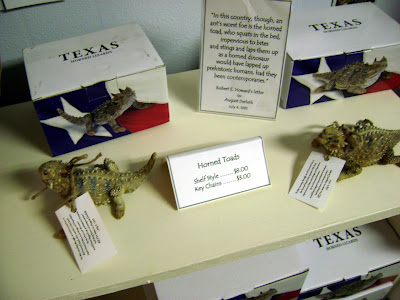 Back to the 36 West for a space before heading over to the Howard House, where the new T-shirt with M.L. Peter's fantastic design had pride of place. There were also two big posters of that film which came out last year, many copies of Conan the Barbarian: The Stories That Inspired The Movie, and a few model horned toads. Why horned toads?

In this country, though, an ant’s worst foe is the horned toad, who squats in the bed, impervious to bites and stings and laps them up as a horned dinosaur would have lapped up prehistoric humans, had they been contemporaries.
- Robert E. Howard, letter to August Derleth, 4th July, 1935 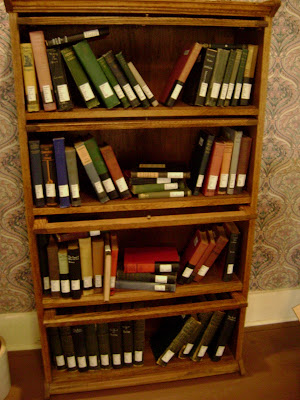 Of greatest interest to me, however, was the removal of the piano. In its place was a bookcase containing books from Howard's own collection. Many of them would be worth a ton in their own right - Rusty noted there might be a couple of first editions in there - but the fact that they might have been read by Robert E. Howard makes them very special indeed. One stood out for me: The Poison Belt by Arthur Conan Doyle, one of the Professor Challenger adventures. I actually think I got a bigger kick out of seeing it than I would if it was, say, The Lost World, a Sherlock Holmes collection, or even The White Company, precisely because it's comparatively little known nowadays. Mention Professor Challenger to most people today, and many would be completely unaware that he starred in three other stories aside from his most famous tale. The fact that I loved the story didn't hurt, of course.

I reacquainted with Rusty Burke, Mark Finn, and Rob Roehm, as well as Arlene and Tom at Project Pride, and many more. After revisiting the house, I went back to get ready for Humphrey Pete's. I drove with Paul. Russell Andrews, and fellow Cimmerian blogger alumnus Jeffrey Shanks, where we talked about history, Homo floresiensis, Survivors (the British post-apocalyptic series), gift-giving in tribal societies, Buddhist ideas, and how Robert Mitchum was a riot on the set.

Then we arrived at Humphrey Pete's, where we met Jim Barron, Ed Chacyk, Dennis McHaney and a whole host of others. One thing I notice is that I tend to go for healthier options while on holiday than I do back home, probably because the quality and price of vegetables is much better. The lettuce over here, my goodness, it's like biting into an ocean wave, absolutely delicious. So, while everyone around me was getting salivation-inducing steaks, hamburgers and tacos, I settled for a chicken caesar salad. 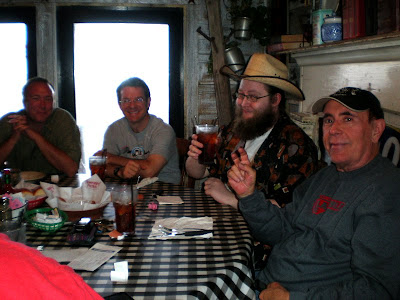 So we talked about the usual: films, books, whatnot. There was a bit of discussion about John Carter, Prometheus, the upcoming Blade Runner sequel (including some things that haven't made it online yet), The Chernobyl Diaries, The Duellists, and that movie. When Capricorn 1 came up, Mark told us about an amazing website run by a conspiracy theorist who claims something about Stanley Kubrick's breakdown being caused by his frustration after being contracted to film the fake moon landings, which was apparently scarily convincing. Jim became a veritable beacon of passionate indignation about the cottage industry of conspiracy theorists, which made me resolve to talk to him more. That said, I was most distracted by the waitress's absolutely beautiful face. I couldn't get over how lovely her face was, she was like a model. Must be a Texas thing: coming in from Dallas one of the staff there was a girl of (at a guess) Native American, Mexican or South American descent, a bit like Sophia Vergara, but she had a face like a Frazetta painting. Not that the ladies of Scotland aren't beautiful, of course, I just found these two girls to have the most amazing, expressive faces. 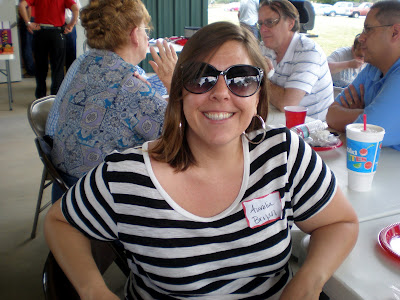 Speaking of beautiful faces... Well, the gang went back to the pavillion to chat, and Aurelia arrived. I might have mentioned her in passing last year, can't quite recall. Anyway, Aurelia came along, and we all chatted about anything and everything. Chris Gruber arrived later, he and I had a very frank and meaningful conversation that I'm truly grateful we shared, before we started reminiscing about He-Man and Thundercats. I also talked with Jim about science, religion, NASA, "science" "journalism" and the search for meaning in a universe full of wonders. I'm very glad I talked with him.

And now to bed: reports for tomorrow will be around the same time.
Uttered by Taranaich at 07:18